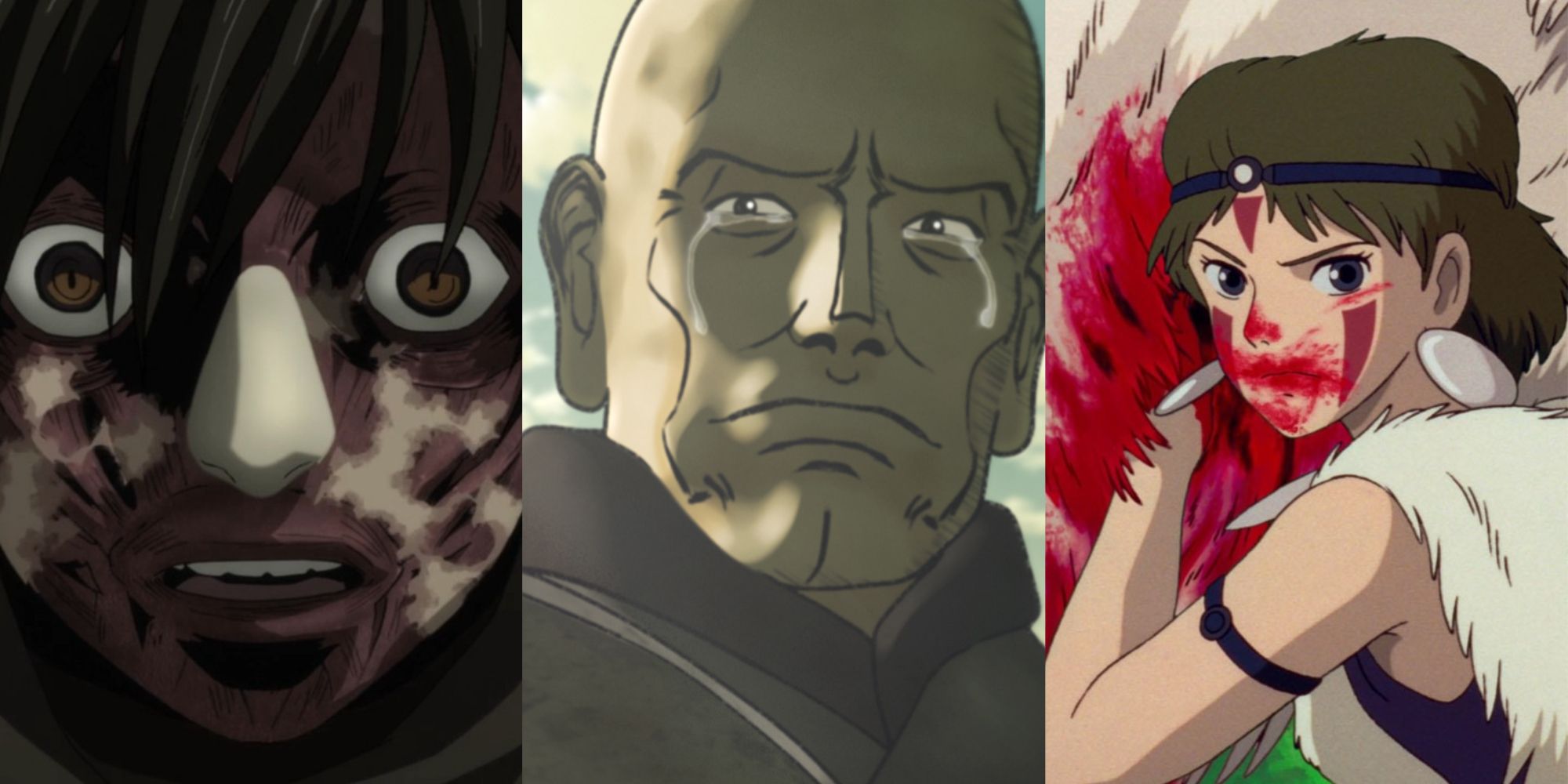 The Sengoku, or “Warring States” Period, was an era in Japanese history of near-constant civil war. Major figures of this era include Toyotomi Hideyoshi, Tokugawa Ieyasu, and Oda Nobunaga, among others. Those three are considered the “Three Great Unifiers” of Japan for restoring Japan’s centralized government.

These three have appeared in and been referenced in a good deal of different anime. For example, Oda Nobunaga is one of the main characters of the Drifters anime. A good deal of anime TV series, movies, and video games use the Warring States Period as a backdrop for their drama, whether they focus on the ruling warlords or the common people caught up in their conflicts.

Warring States Era Japan is a war-torn, famine and disease-ridden place littered with dead soldiers, murdered civilians, and burned down villages. Osamu Tezuka decided to throw in 48 demons. Dororo (2019) lowers the number to 12. Not that it keeps its setting from being similarly horrid. Dororo (2019) is the second adaptation of the 1967 manga of the same name.

The story follows Hyakkimaru and his traveling companion Dororo as the two travel across feudal Japan in search of the demons who stole his body parts from him. While the original Dororo manga and anime have a lot of anachronisms, the 2019 adaptation changes the tone by removing them and keeps its Warring States setting as a serious low fantasy.

9 A Fancy Cup Can Be Traded For A Political Alliance

It’s time for tea, war, and politics. Hyouge Mono is a 39-episode seinen period drama about warlord Furuta Sasuke. He develops a fascination with the art of the tea ceremony that conflicts with his desire for promotion. A lot of the political wheeling and dealing within this anime occurs over cups of tea.

Characters’ sense of aesthetics and ceremony subtly reflect their philosophies and influence their role in political machinations. Though Hyouge Mono is a drama, it is not without its comedy. The series tends to be rather surreal with its facial expressions, causing the viewer to laugh during otherwise serious scenes.

Inuyasha is a well-known fantasy adventure manga-turned-anime considered to be classic among its fans. The story follows Kagome, a middle schooler who climbs down the well of her grandfather’s shrine and finds herself in Warring States-era Japan. However, this version of feudal Japan is not just competing warlords. Here, yokai, evil wizards, and monsters run rampant.

She meets the titular half-yokai Inuyasha and the two travel across the dangerous land gathering companions and eventually defeating a great evil. Since the series’ initial conclusion, a sequel series, Yashahime: Princess Half-Demon, has been released. The new anime stars children of the previous cast and their adventures.

7 Nobunaga Gets A Ninja Girl

Nobunaga’s Shinobi is a series of shorts based on a yonkoma (four-panel) comic strip manga. Chidori is a skilled young ninja girl who is saved from drowning by Oda Nobunaga himself. As thanks for saving her life, she swears fealty to him and vows to help him conquer and unite Japan’s warring states.

True to its yonkoma roots, the anime is a rapid-fire comedy, setting up its jokes and punchlines with incredible swiftness, sometimes requiring a second watch of its three-minute episodes. While the series primarily focuses on its comedy, it maintains a level of educational value by staying true to proven facts where it matters.

6 A Man, A Boy, & A Dog Fend Off Chinese Assassins

Sword Of The Stranger

Sword of the Stranger is an action-packed adventure film set in the Warring States Period. The movie is about a young boy, Kotaro, and his dog who are being pursued by soldiers from China’s Ming Dynasty. Kotaro runs into a wandering ronin named Nanashi by chance and hires him as a bodyguard.

Nanashi and Kotaro form the classic badass and child duo and face many perils to find a safe haven from the Chinese warriors and their deadly leader. Unknown to the trio, Kotaro is being pursued because of his role in a prophecy.

“Who cares about what happened in Japan’s past? It has nothing to do with my life.” Twenty-first-century high school student Saburo would come to regret those words as he travels back in time to the Warring States era in Nobunaga Concerto. After running into an escaping nobleman with strangely similar looks to him, he takes the nobleman’s place among his retainers.

Turns out the nobleman was Oda Nobunaga and now Saburo has to reenact history without having a clue how things are supposed to go. Despite this, Nobunaga Concerto is renowned for its historical accuracy, even with its time-travel twist.

Sengoku Basara: Samurai Kings is an anime television series adapted from a video game franchise of the same name. The anime and game are very loosely based on the events of the Warring States period. The franchise follows an alternate history where the main characters Date Masamune and Sanada Yukimura form an alliance with other warlords to defeat Oda Nobunaga.

However, over the course of Sengoku Basara‘s two seasons and movie, Nobunaga isn’t the only prominent figure set up as an antagonist. The series was picked up by Funimation and received a dub with an all-star cast.

The Ambition of Oda Nobuna

After being saved by Toyotomi Hideyoshi at the expense of the general’s life, Yoshiharu takes his place as Oda Nobuna’s (Oda Nobunaga’s female counterpart’s) retainer. His goal is to ensure that Nobunaga succeeds in uniting Japan and finding a way back to his own time. It’s never explained how Yoshiharu ended up time-traveling to the Warring States Period.

Asura is a darkly dramatic anime film that can only be recommended to mature audiences. In 1460, Japan is plunged into famine and many of the common people are in desperate straits. Many driven by hunger have resorted to cannibalism. It is in this situation that the main character, Asura, is born.

After miraculously surviving his infancy, Asura turns to eating human flesh to stay alive as the famine continues. Though the movie has great shows of human kindness and resolve, it is nonetheless heartrending and sad to watch.

1 Two Sides At War & The Destruction Between Them

Princess Mononoke is a widely acclaimed film produced by Studio Ghibli and written by Hiyao Miyazaki. Princess Mononoke technically takes place during the Muromachi era (1336 to 1573), but it largely overlaps with the Warring States period (1467-1590). The movie is primarily about the conflict between industrializing humanity and the nature spirits that are threatened by humanity’s infringement on their territory.

Despite this, it is clear within the movie that humanity is not united by any means. The characters come into conflict with enemy armies, which only intensifies the movie’s core conflict. Princess Mononoke‘s anti-war message shows that all sides are damaged by each other’s ignorance and greed.