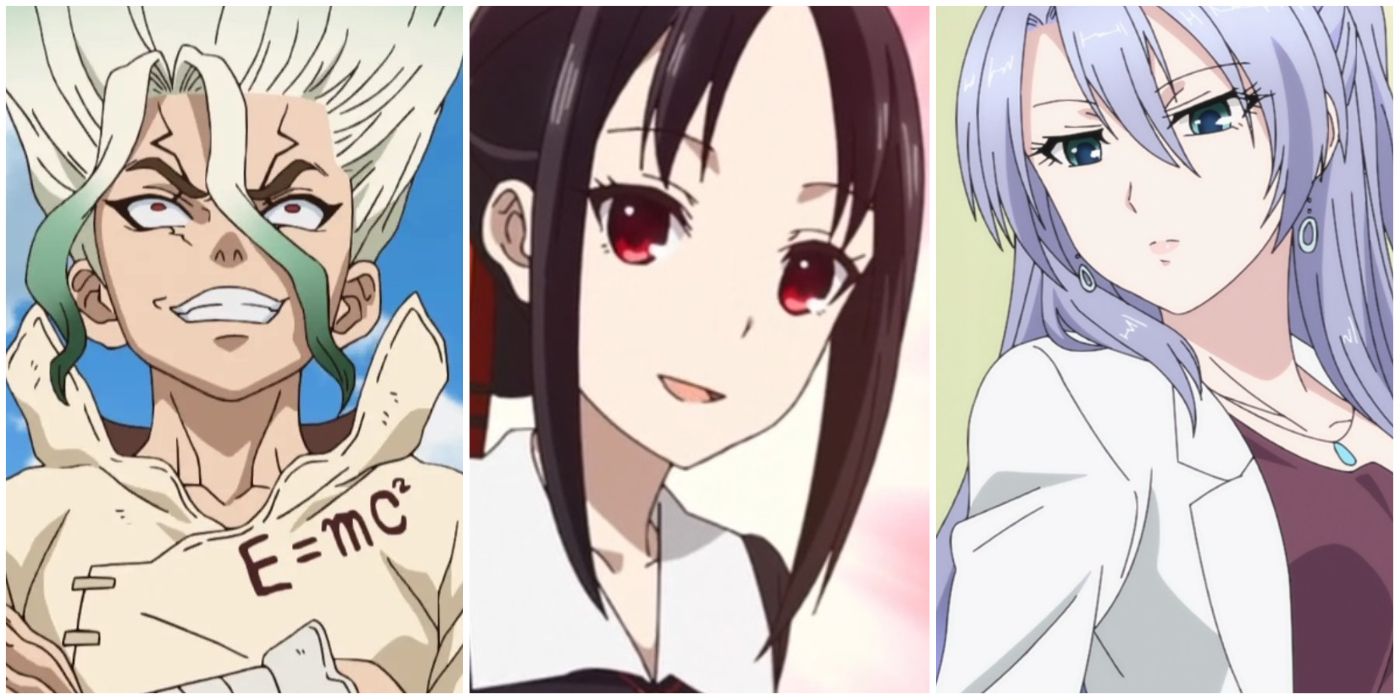 Kaguya-Sama: Love is War is a beloved seinen romance anime set in a private high school. The co-stars Miyuki Shirogane and Kaguya Shinomiya are both deeply infatuated with one another, but these clever, stubborn students won’t dare admit it. Instead, they’d rather trick the other into making a love confession first, and Kaguya often seems to have the edge.

Kaguya Shinomiya is a wealthy heiress who uses all her wits, tricks, and crafty plans to lure Miyuki, her beau, into one romantic trap after another. She is the school’s second-best student and a wily schemer, but even she has a few things to learn from anime’s smartest and most educated characters of all.

10 Ayame Himuro Will Prove Her Love, Whatever It Takes

Science Fell In Love, So I Tried To Prove It

Science Fell in Love, So I Tried to Prove It is almost like a college-based Kaguya-Sama, featuring two brilliant but romantically clueless co-leads who use wits and schemes to try and prove their love. The gorgeous dandere Ayame Himuro is more emotionally intelligent than Shinya, but she still has a long way to go before proving her love.

Ayame is a well-respected and highly educated University of Saitama student. She can blend all kinds of theories, formulas, and concepts in clever, intuitive ways to devise new love experiments or express herself in ways Shinya Yukimira, a fellow scientist, can understand.

9 Lelouch Lamperouge Manipulated Two Nations To Get What He Wanted

Code Geass is a popular sci-fi mecha anime where the massive Britannia Empire has already conquered Japan and renamed it Area 11, wiping out Japan’s identity and its people’s pride in the process. Lelouch Lamperouge may be the emperor’s son, but he’s more sympathetic to the Japanese people.

Lelouch is a classic INTJ, or an aloof, calculating schemer who’s always thinking ahead. He actually manipulated both sides one after the other to set everything up, then allowed himself to be publicly assassinated. With his death, Area 11 was restored as Japan, and Lelouch got what he wanted after all.

Even if Spy x Family‘s protagonist Loid Forger has a tough time figuring out how to be a foster parent, he is actually a brilliant fellow with an agile, witty mind. Only the smartest Westalis spies could last so long in Berlint, or Ostania’s capital, and Loid makes it look so easy.

Loid Forger’s mental tricks are many, from resourceful improvisation to cunning disguises and memorizing large amounts of information, including people’s faces, without any trouble. He is tasked with taking down Donovan Desmond, and only WISE’s smartest spy would be entrusted with such a mission.

Senku Ishigami is a partial isekai anime hero in Dr. Stone, having awoken from petrification in a new Stone Age 3,700 years in the future. Human civilization is gone, but as a passionate lover of all hard sciences, Senku will reinvent civilization one gadget at a time.

Senku had already memorized countless blueprints, formulas, and science facts, making him a one-man research team. He spent much of Dr. Stone rebuilding everything from medicine to light bulbs and walkie-talkies, all without a single book or Internet database for reference.

Most Fairy Tail characters have a pretty straightforward fighting style with their fists, weapons, and magic, but they can still be remarkably clever to get the edge on a stronger opponent. The best example is Mavis Vermillion who, around a century ago, became the smartest wizard in the world.

Mavis read an entire library and puts its knowledge to good use in creative and intuitive ways. She also learned to use illusionary magic to good effect. In the Grand Magic Games tournament, Mavis took command of both Fairy Tail teams and brilliantly led them to victory with her ingenious orders.

5 Momo Yaoyorozu Can Make Anything

Only two students in class 1-A got into UA through recommendations, with the genius Momo Yaoyorozu being one of them. Momo was born with an incredible Creation Quirk, but that Quirk’s wielder must be smart enough to understand an item’s composition and inner workings to successfully create it.

Since her girlhood, Momo has been an expert in Creation’s use, and she can even make advanced electronics with it, such as working stereos and tracking devices. Momo is also a gifted tactician and strategist, using her Quirk and battle plans alike to utilize her team’s full potential in any scenario throughout My Hero Academia.

4 Dr. Vegapunk’s Science Is On Another Level

One Piece characters are smart in all kinds of ways, from the kuudere Nico Robin reading the poneglyphs to Doflamingo running an entire kingdom to Nami’s expert navigation and cartography. Then there’s Dr. Vegapunk, who is smarter than all of them put together.

Dr. Vegapunk, true to his cartoony Albert Einstein appearance, is a genius scientist whose technology and ideas are centuries ahead of his time. He can even crack the secrets of the sea stone, the Devil Fruits, and the Lineage Factor, among other things.

3 Light Yagami Nearly Took Over The World As Kira

Light Yagami is the dark antihero of Death Note, a frustrated high schooler who decided to use the supernatural Death Note to change the whole world. He aimed to rid the world of crime, but in so doing, became a tyrannical serial killer.

Light had many mental gifts, from his perfect academic record to his exceptional acting skills and of course, his cunning schemes against L. Even without the Shinigami eyes, Light could outmaneuver the brilliant L with his unusual tricks, including potato chip bags, proxy Kiras, and even wiping his own memories.

Van Hohenheim is Ed and Al’s estranged father in Fullmetal Alchemist: Brotherhood‘s story. He was born centuries ago as Slave #23, then learned and researched alchemy with a homunculus guiding him. After being a living Philosopher’s Stone, Hohenheim wandered the world, planning Father’s downfall.

Hohenheim spent a few centuries learning and practicing alchemy, and he even spread alchemy to the massive nation Xing, inspiring alkahestry. No matter what Father does, Honenheim has the perfect strategy to counter it, including the use of highly advanced, large-scale alchemy.

The hit anime Case Closed, also known as Detective Conan, stars a brilliant boy named Shinichi Kudo who was shrunk into a kid’s form early in the series. Despite that, Shinichi will fight on as the ultimate detective who can solve even the most baffling cases.

In countless episodes and manga chapters, Shinichi put his powerful mind to good use, sniffing out obscure clues and cleverly piecing everything together to solve these mysteries. He’s a modern Sherlock Holmes with some Scooby-Doo flair, and it’s awe-inspiring to watch.

NEXT: The 10 Oddest Odd Couples in Anime