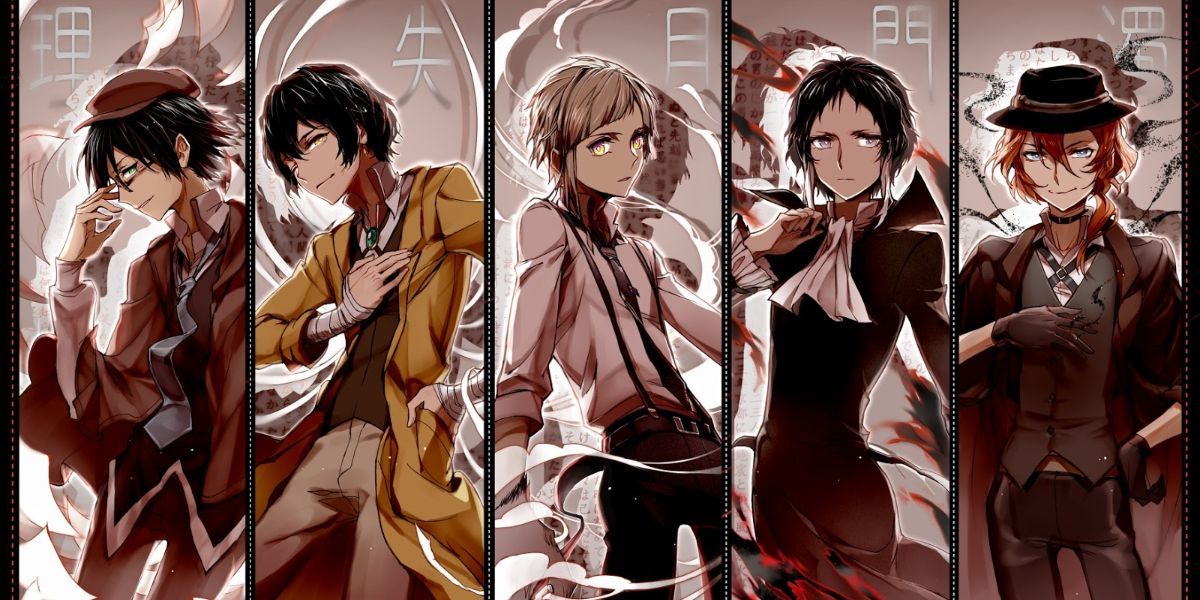 Bungou Stray Dogs is a must-watch anime that has it all: detectives, organized crime, superhuman abilities, and even a pet raccoon named Karl. With a vast cast of characters, there is someone for everyone to relate to and love.

10 Dazai Is An Unreliable Partner

Dazai may be a fan favorite in Bungou Stray Dogs, but he would be one of the worst husbandos out of the entire cast of characters. Though he is a charming and enigmatic genius, Dazai has a dark past. As a former Port Mafia executive, Dazai’s reputation is questionable at best.

Dazai is repeatedly shown to be untrustworthy and obsessed with outsmarting his enemies, no matter who or what he sacrifices in the process. Add those qualities to his fixation with death and morally gray ethics, and it isn’t hard to see why Dazai is not husbando material.

9 Hirotsu Is A Competent Leader With A Checkered History

As the head of Black Lizard and the Port Mafia’s most elegant dresser, Hirotsu is a natural at bringing order to chaos. With a gang of powerful and quarrelsome Port Mafia members under his command, Hirotsu manages to complete objectives with great success. However, that success typically means brutality.

Hirotsu has no qualms with using his ability to hurt his enemies if it means furthering the Port Mafia’s strength. That being said, Hirotsu’s loyalty to the Port Mafia also extends to its members. He is shown to be extremely protective of his underlings in a way that others are not.

Kunikida is a responsible and well-adjusted adult who would make a great husbando. He is hard-working and uses his ability to help others in need. Kunikida is also shown to be the most likely choice to be the next President of the Armed Detective Agency, proving just how competent of an individual he is.

However, Kunikida is fixated on ideals, often misunderstanding how the real world works. In his book of ideals, Kunikida has a list of 58 requirements a woman must meet to be considered his ideal partner. Though Kunikida’s talents and smarts would make him excellent husbando material, his standards are unattainable.

7 Ranpo Will Always Have Snacks

Ranpo has many qualities to admire. If fans are looking for someone who will always have sweets stashed away, Ranpo can deliver. Ranpo has a collection of snacks for any occasion, though it may be difficult to get him to share.

Ranpo’s sharp mind and powers of observation are unparalleled, making him the only non-gifted member of the Armed Detective Agency. Ranpo is always there to keep others on their toes. However, oftentimes that same brilliance prevents Ranpo from understanding the actions of the everyday man.

6 Fitzgerald Puts His Money Where His Mouth Is

Though Fitzgerald is framed as an antagonist to both the Armed Detective Agency and Port Mafia, he is undeniably husbando material. All of Fitzgerald’s actions are motivated by his love for his wife. There are no lengths to which Fitzgerald would not go for his beloved.

Beyond his loyalty to his wife, Fitzgerald manages to persevere even when he’s at his lowest. On top of his fierce determination, Fitzgerald is filthy rich and has no problem with big spending. Any fan would be happy with a wealthy and savvy husbando.

5 Akutagawa Is More Than Just A Port Mafia Member

If an orphan with a chronic cough and Dazai-induced trauma is something that interests fans, then Akutagawa is the perfect husbando. Akutagawa is a complicated man with an even more complicated past. Trained by Dazai from a young age, Akutagawa constantly sought approval from his mentor, but he never received it. This led to Akutagawa developing a fierce need to prove himself, which sometimes puts him in less-than-ideal situations.

Despite his fraught past, Akutagawa has a rather strong moral compass, even though he does not like to show it. Though he has a rivalry with Atsushi and the Armed Detective Agency as a whole, Akutagawa often chooses to help instead of hinder. He is also a dedicated older brother to his sister, Gin.

4 Poe Is A Sensitive & Creative Soul

If fans are looking for the silent and mysterious type, look no further than Edgar Allan Poe. Just like his namesake, Poe is a talented writer with a creative mind. His special ability allows Poe to trap readers inside his novels, quite literally bringing his words to life. This ability is shown to bring others (such as Ranpo) endless entertainment.

However, Poe is much more than his skill with pen and paper. Poe also loves animals, as shown by his fierce loyalty to his pet raccoon, Karl. Poe’s dedication to his furry friend shows just how tender of a heart he has.

3 Atsushi Is As Gentle As A Kitten

While many of the members of the Armed Detective Agency, Port Mafia, and Guild have their own agendas, Atsushi’s goal is simple: to help people. Growing up as an orphan, Atsushi knows all too well what it feels like to be helpless and lonely. Atsushi goes out of his way to make the lives of those around him better.

Though he may be a weretiger, Atsushi’s personality is as gentle as a kitten’s. Atsushi manages to find the good in everyone, even those who fail to find the good in themselves. His loyalty and sweet nature make Atsushi the perfect husbando material.

2 Fukuzawa Will Protect Everything He Loves

Skilled, strong, and kind, Fukuzawa is hard to beat, both with a katana and as one of the best husbandos. As the founder/president of the Armed Detective Agency, Fukuzawa uses his connections to protect the entire population of Yokohama to the best of his ability. Fukuzawa does not let his checkered past interfere with his desire to do good.

10 Anime Heroes Who Are Ashamed Of Their Past

Fukuzawa’s dedication does not stop there, as he acts as a patient mentor to his employees, guiding them with his steady support. Fukuzawa is even a father figure to Ranpo, proving that he has what it takes to care for even the most eclectic of people.

The world of Bungou Stray Dogs would be nothing without everyone’s favorite short king. Chuuya Nakahara is prime husbando material, from hat to toe. Chuuya is one of the most powerful individuals in Yokohama due to both his position as Port Mafia executive and his unrivaled gravity manipulation ability.

Though Chuuya can have a short temper, the brunt of his rage is almost always directed solely at his former partner, Dazai. Chuuya has a soft side too, especially in Bungou Stray Dogs: Wan! He is repeatedly shown to have a huge heart, especially when it comes to puppies. With power, charisma, wealth, and a soft side, Chuuya is hard to beat.

NEXT: Who’s Your Anime Husbando, Based On Your MBTI® Type?