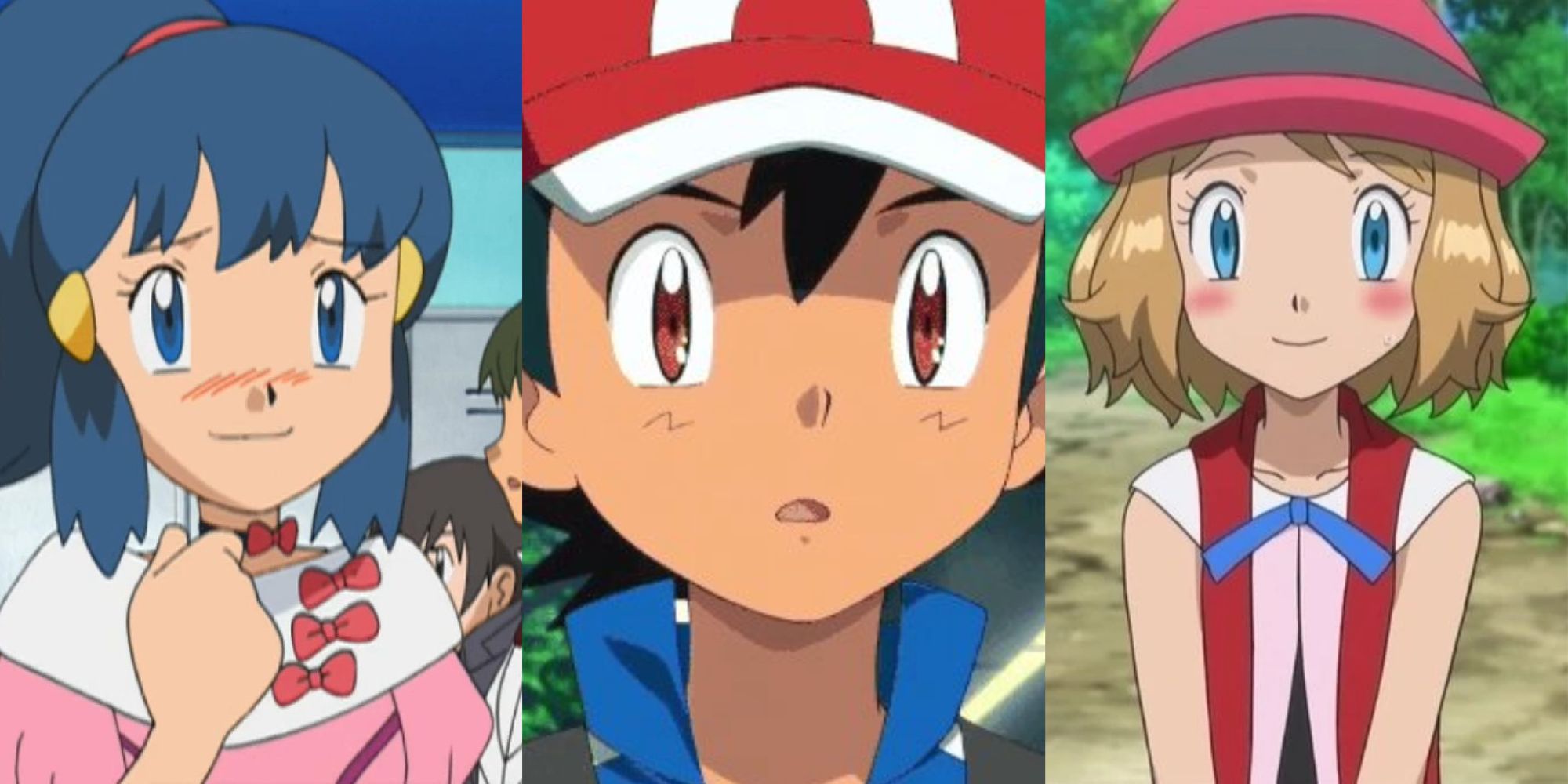 The Pokémon anime may be based around the titular creatures, but it’s the relationships Ash Ketchum has made that keep things interesting. Ash’s friends and their own connections with people they encounter contribute to the viewing experience, which has brought great material for shippers.

Fans have long held to the belief that the Pokémon characters make sense as part of certain couples. This includes Ash’s dynamic with his friends to supporting protagonists and those that form part of their story arcs. With Ash’s story now at an end, it’s worth looking back at the ships that have kept fan interest afloat.

10 Ash & May Have Many Shipping Moments

May is among the Pokémon characters who deserve more screen time. Her story felt incomplete when she left Ash to go on her own, although fans got to see many shipping moments by then. Of all of Ash’s female friends, May has been the one he quarreled with the least.

Ash also put himself in harm’s way whenever he needed to protect May, which fans like to use as proof of their coupling. The two gave each other space to pursue their goals while providing support. They were even mistaken for a couple on occasion, so there’s quite a bit of shipping material here.

9 Tracey & Misty Have An Unproblematic Relationship

Tracey and Misty traveled with Ash in the Orange Islands, where they were a contrast to Ash’s frequent quarreling with Misty. As a result, the pair have become a popular ship for being so unproblematic. They haven’t been seen together since, but fans hope they will be reunited.

Tracey and Misty had a few shipping moments during their time together, which weren’t strictly canon, but they still convinced viewers of their chemistry. While most fans liked the tension-filled dynamic between Ash and Misty, it’s also nice to see her easygoing relationship with Tracey.

Jesse and James are an easy pair to see as a Pokémon couple, with many mistaking them as such when the anime began. The two are very much alike, being kooky individuals who keep messing up their missions. Together with Meowth, fans like to see the characters as a real family.

RELATED: 15 Pokémon Ash Should Have Brought Back For The Masters Eight

Jesse’s knack for bossing James around never feels mean-spirited since that’s how their relationship seems to work. His many pratfalls and Jesse’s tendency to stick with him despite all of that is perfect for a real romance. Viewers wouldn’t mind seeing the two make it official.

7 Ash & Goh Have The Same Goals

There hasn’t been any friend as similar to Ash as Goh was, as the pair became friends through their drive to succeed. There were many Pokémon that Ash caught in the anime, which only fascinated Goh further to stick with him as his companion.

The way Ash and Goh click has led fans to consider how their relationship would work. Shipping enthusiasts like to imagine the two being together on numerous adventures where they find new Pokémon and bring out the best in each other. It’s an inviting thought for two characters who have similar goals.

6 Ash & Dawn Have A Heartwarming Dynamic

Ash and Dawn have great best-friend energy between them, seen frequently doling high-fives and encouraging each other to become stronger trainers. The pair rarely fought and have had the most wholesome reunions over the years — Dawn even showed up to support him in his final battle.

Fans like to think of a scenario where the two friends take their relationship to the next level. They are very compatible in general, and their supportive nature only empowers the other. Dawn has also appeared the most out of Ash’s friends over the years, which viewers believe implies their unflinching bond.

Brock’s tendency to fall in love has been one of the most recurring Pokémon gags, although his feelings are generally denied. But Lucy was a change from the norm in that she actually welcomed his affections. The two interacted when Brock accompanied Ash when he battled Lucy, and she always blushed whenever she was around him.

Lucy and Brock are pretty much canon since she reciprocated his interest, but they had to go their separate ways. Fans would be delighted to see the two reunited for good, as Brock’s neverending search for love would be complete with the one girl who likes him back.

Brock and Cilan fulfilled the same purpose in their roles in Pokémon, offering Ash guidance in his journey. The two ended up meeting without Ash in the mix, becoming good friends even though they didn’t know each other’s names.

Viewers noted how well the pair got along, which was then paid off when Brock and Cilan were revealed to have become partners in the latest season. Shippers like to imagine that Brock and Cilan have become a couple due to their mutual chemistry, which makes sense, given how similar they are.

3 May & Drew Have A Rival-Turned-Lovers Dynamic

Drew was May’s rival throughout her run in Pokémon, going from a foe to a friend. May was clearly taken by him at the end, as her opinion about him changed. The two were the primary ship at the time their story was active in the anime.

Drew came to respect May after initially writing her off, paving the way for a heartwarming interaction. His bad-boy attitude is a good contrast to May’s more likable personality, making them a solid “Will they?/Won’t they?” couple. Fans will find it satisfying if the two are shown in a romantic light in the future.

2 Ash & Serena Have An Entire Arc Dedicated To Them

Serena’s obvious feelings for Ash was another recurring gag in Pokémon, lasting the whole time they traveled together. Serena tried to gain Ash’s attention, which she seldom received due to his oblivious nature. However, fans were convinced that this was a build-up to their eventual relationship.

Serena had the most notable goodbye with Ash, where it’s implied she gave him a kiss before leaving. This is another instance that adds to the belief that the two are meant to be. It can become a possibility should Pokémon choose to show the future where Ash and Serena are together.

The entire culture of shipping Pokémon characters began with Ash and Misty. The two started things off on uneven terms, as Ash unintentionally destroyed her bike. This set up their constantly quarreling dynamic before they came to genuinely care for each other as friends.

The anime showed many characters poking fun at Misty for fancying Ash and denying it, which shippers also agree with. Their relationship has remained interesting to follow over two decades later, as Misty returned for Ash’s final arc. Those who ship them will prefer to see the pair as a couple to round things off for the show.

NEXT: 10 Most Iconic Water-Type Pokémon