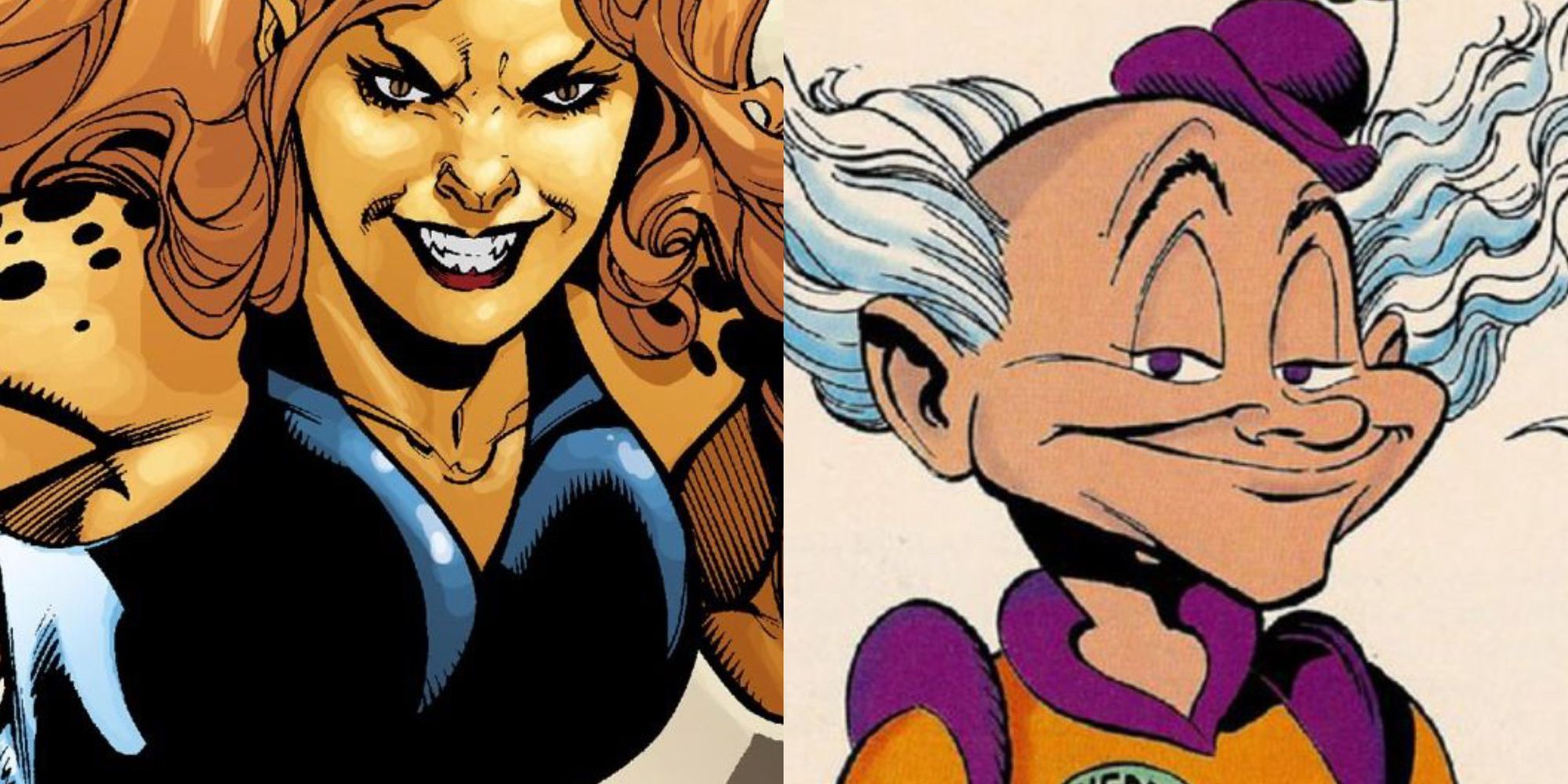 Many readers are drawn to comics due to their superheroes but stay for their villains. This is especially true for DC, a company known for its complex, dark villains, like the Joker or Reverse Flash. However, even though fans know this comics titan has the best villains, it’s common for DC to get stuck on the same dozen every time.

Underrated or not, there are many DC villains whose stories mostly depend on the heroes they fight. However, their backstories are usually as enthralling as any hero’s, and they usually make for great plots. 2023 is the perfect year to give these characters their own series.

When he was only a child, Barton Mathis’s father took him on hunting trips where they would murder people and cannibalize them. When he grew older, after taking the Dollmaker moniker, he found it fitting to start his own daughter in the family business. Matilda Mathis then became Dollhouse herself.

Together father and daughter have murdered dozens, often using their organs for trade in the black market. Regardless of who is after them (like Jim Gordon or Batman), their crimes pick the morbid curiosity of any reader. Dollmaker and Dollhouse are a terrible duo, but they would make a perfect combo for a truly chilling DC horror series.

9 Ratcatcher’s Heir Almost Became A Reality After The DCEU

The Suicide Squad introduced Cleo Cazo to the DC universe for the first time. The daughter of the criminal known as Ratcatcher, Cleo, aka Ratcatcher 2, commands rats into committing all kinds of crimes for her benefit. Cleo doesn’t appear in the comics, but The Next Batman: Second Son #6, by John Ridley, Travel Foreman, and Rex Lokus, hinted at one of the Ratcatcher’s minions becoming his successor.

In the climax of this issue, after the cops kill Ratcatcher, one of the kids manages to escape with his mask. After a long, reflective star, it becomes obvious that she will take the moniker too. So far, she hasn’t appeared in comics again. However, considering how much people loved Cleo, DC should bring her back as soon as possible.

8 Condiment King Should Be Taken Seriously

A joke villain, the Condiment King is a satire about the over-the-top, thematic Batman antagonists that were everywhere in past decades. Since he debuted, his backstory has changed a couple of times, but he remains one of Batman’s weirdest villains. At the moment, he’s supposed to be a man named Mitchell Mayo, who is frustrated and bitter about being a loser.

Given his resentment, Mayo uses all kinds of condiments to induce anaphylactic shocks into his adversaries. This is barely glamorous. However, fans love the idea and would like to see him in his own series. DC has a true challenge on its hands. Any writer that can turn Condiment King into a serious villain will prove their talent.

Created by William Moulton Marston as Wonder Woman’s nemesis, Cheetah has gone through several changes since her debut. For instance, her alter ego post-Crisis is Dr. Barbara Ann Minerva, a power-obsessed archeologist with a grudge against Diana.

Cheetah is one of Wonder Woman’s greatest villains. However, she’s often ignored when it comes to true character development. Any series that includes her usually paints her as a villain or an antihero at best, but they never delve into her mind. She has never starred in a series of her own, but 2023 is the perfect time to have her do it.

6 Lena Luthor’s Potential Has Been Wasted For Years

A character created by Jerry Siegel and Kurt Schaffenberger, Lena Luthor is Lex’s younger sister. Throughout DC history, there have been many different Lena iterations. Some of them grew up with Lex while others didn’t know anything about him, even going by a different last name, Thorul.

Lena is an interesting character all-in-all. She often walks the line between good and evil, and she has lived many different things. However, she has never been more than a secondary character. With the success the Arrowverse’s version earned for the character, DC should consider giving Lena her own story soon.

5 Magog Is Already On Earth-Prime

The main villain of Kingdom Come, Magog, became famous for being one of the most violent vigilantes of this Elseworld. In 2008, Magog was introduced to the main continuity. This character, a doppelgänger, deals with the fear of others who know what the other version did. Up until today, Magog hasn’t starred in his own series, nor as a hero or a villain.

It would be interesting to see the new Magog actually face his own evil version from an alternate world — especially because Kingdom Come‘s Magog died during this series. 2023 sounds like a good year to finally redeem this character, almost 30 years after he first debuted.

4 Huntress Has A Very Complex Backstory

Every day less of a villain and more of an antihero, Helena “Huntress” Bertinelli is a vigilante who started her path by seeking revenge for the cold-blooded murder of her whole family at the hands of the mafia. When she met Batman, she became one of his principal love interests as well as her enemy, since she has no problem with murder.

Helena’s tragic past makes for a great narrative. The death of her family inspired her to pursue criminals, but it also sent her over the edge. She’s a more passionate, less controlled version of Batman. Her psyche has been explored before — as she has three different solo runs under her belt — but there’s still a lot to say about the way she has chosen to process trauma.

3 Mr. Mxyzptlk Is Practically Invincible, But He Always Ends Up As A Joke

Unarguably one of the most powerful characters in DC, Mr. Mxyzptlk is an imp from the fifth dimension whose sole purpose in life is to trick others. While he isn’t necessarily a villain (and often plays as an antihero), he mostly uses his warping-reality powers to torment and annoy others, especially Superman.

Since Mr. Mxyzptlk comes from a dimension humans can’t even comprehend, it’s easy for him to access magic others can’t. This means, if he wanted to, he could be truly dangerous. However, when he appears in comics, they mostly have a humorous tone. 2023 could be the year DC treats the fans to a serious Mr. Mxyzptlk story.

2 Perpetua’s Time In DC Shouldn’t Be Over Yet

One of the Hands from the greater Omniverse, Perpetua is the mother of the Monitor, the Anti-Monitor, and the World Forger. She was the first creator in the whole multiverse, and she’s feared among all other superpowered cosmic beings in DC. Regardless, her story has never been told from her own perspective.

Due to her sheer power, Perpetua is quite an interesting character. A comic with her in the center could be about her creation or about her perspective on all the Dark Knights: Metal events. Either way, her nigh-omnipotence, and warping-reality powers would be excellent plot devices for an epic comic.

1 The Riddler Is One Of Batman’s Top Villains

Unarguably one of the most iconic members of Batman’s rogue gallery, the Riddler gained new popularity this year, after Paul Dano’s performance in The Batman. Contrary to other iterations of this character, Dano’s version is less eccentric. He’s a serial murderer inspired by the Zodiac Killer.

Of course, fans love the darkness that surrounds this character. Unfortunately, he was short-lived, as he exists only in the movies. Even now, almost a year after the film, fans would love to see a darker rendition of the Riddler. This year, DC should definitely give him his own series.

NEXT: 10 DC Villains With Too Many Aliases