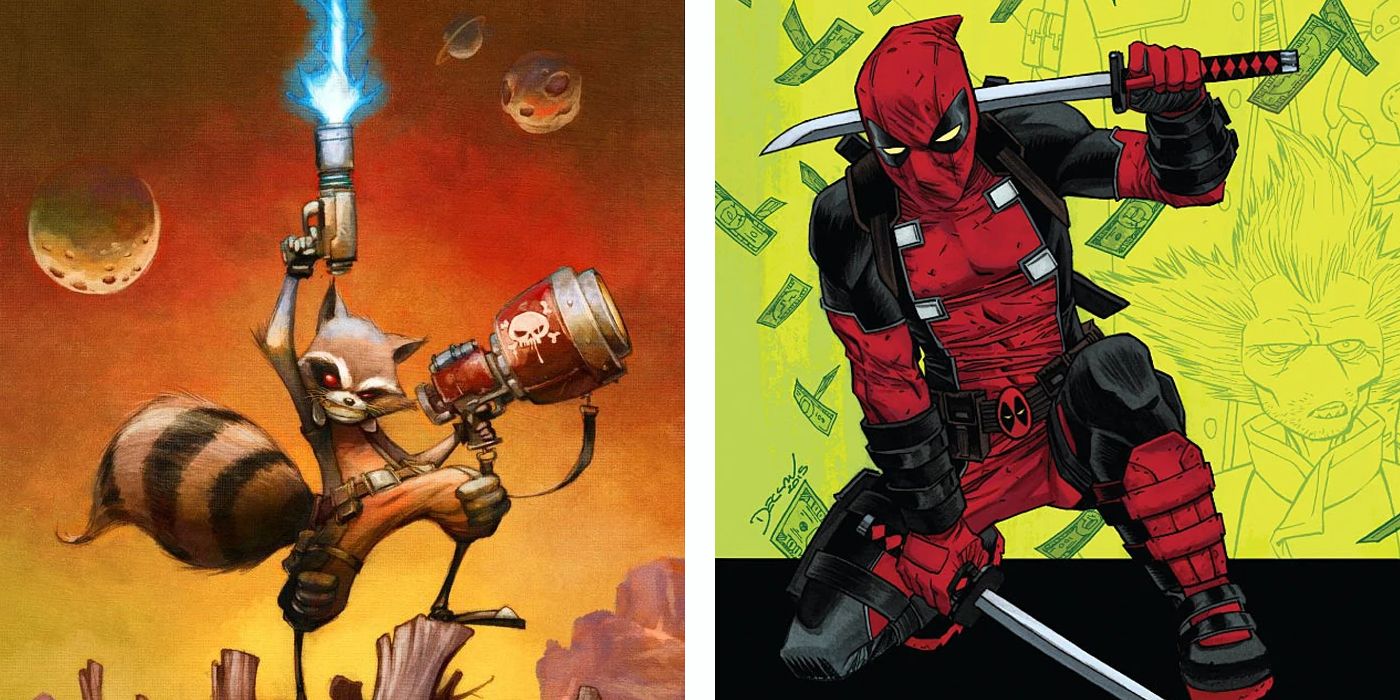 Greed isn’t a quality people expect from their heroes. Most of the heroes in the Marvel Comics universe do the right thing just because it’s morally right, without any expectation of reward. However, there are still some who manage to do the right thing while looking out for their own interests.

Whether they’re chasing after money, fame, or power, certain heroes just can’t help but be a little bit selfish while saving the rest of the world. Maybe it’s no coincidence that a surprising number of heroes are extremely wealthy. These heroes may not be known for their altruism, but some have managed to walk the line between virtue and vice.

10 Rocket Raccoon Is In It For The Units

The entire Guardians of the Galaxy team could probably qualify as greedy heroes, but Rocket outshines them all. Whenever profit is on the line, Rocket will be chasing it at all but the most dire costs. Recently, he was spotted in X-Men comics at Gameworld–an intergalactic casino where people could bet on the fates of entire planets, which were then manipulated and sometimes destroyed.

Although Rocket is driven heavily by his desire for profit, he also has a kinder side. He clearly cares about other people underneath his gruff exterior. He was treated extremely badly by others in the past, so he has his defenses way up, but Rocket does great things when necessary.

Many of the greediest heroes skirt the line between hero and villain, and Felicia Hardy, or the Black Cat, is a prime example. Felicia began her costumed career as a thief, where she first met Spider-Man. She felt an instant attraction to the Webbed Wonder, which encouraged her to turn her life around.

Black Cat still flirts with her mildly villainous past sometimes, but lately she has increasingly been trying to stay on the side of Marvel’s heroes. Spider-Man has been going through a rough patch in his comics, and while MJ has moved on, Felicia and Spider-Man’s relationship has been positive for both of them.

Not all greedy heroes are greedy for money. In the case of Doctor Strange, money isn’t really an issue. The Sorcerer Supreme has seemingly unlimited material assets. Rare arcane knowledge, on the other hand, is short supply and high demand, and Doctor Strange has been known to sometimes cross the line to obtain it.

There are rules governing what magic should and shouldn’t be used. Dark magic can have horrific effects on the people who use it, as seen in Doctor Strange in the Multiverse of Madness. Strange’s ego can get the best of him though, and his desire for knowledge and arcane power has sometimes had un-heroic consequences.

7 There’s A Reason Iron Man Is So Rich

Tony Stark is one of the richest men on planet Earth. A lot of that money came from some pretty shady sources though, before Tony put on the Iron Man suit and joined Earth’s heroes. The richest people can also be some of the greediest, because they are anxious to hold on to their fortunes.

Stark no doubt uses his great wealth to help people and the heroes Iron Man works with. But there’s a reason he can keep building technologically-advanced Avengers compounds without running out of cash–he’s not above using a crisis to also make a profit or protect what he already has.

Most readers know that Emma Frost is an incredibly powerful telepath. What is less commonly discussed, however, is the fact that she is also an extremely wealthy and successful businesswoman. Marvel’s creators seem to be more eager to highlight her gravity-defying costumes than her shrewd business skills.

Despite the unflattering writing that Emma Frost deals with, she remains one of the most powerful mutants on Earth. She currently uses her powers for good, but that was not always the case. Emma wants to help people, but she wants to make sure she can maintain her bank balance and position of power as well.

5 Gambit Can Steal Anything, Including Hearts

Gambit didn’t start out life as a hero. Remy LeBeau was raised in the Thieves’ Guild, then acted as a spy for the villainous Mister Sinister before being recruited by Storm (also a former thief) to join the X-Men. Gambit may be a walking red flag, but he still became one of fans’ favorite mutant heroes, but he still retained some of his old traits.

In the current X-Men series, Gambit has most often been shown at his regular late-night poker sessions with people from all over the hero to villain spectrum, including Black Cat and The Thing. And if a wink and a “ma chère,” allows a man to pocket a few jewels while also saving the day, can you really blame him?

Alison Blaire, or Dazzler, is one of Marvel Comics’ biggest pop stars. She is also a mutant who can transform sound waves into explosions. The louder the sound, the bigger the boom. Her powers have recently been on display along with fellow explosive mutants Boom Boom and Jubilee in the entertaining X-Terminators miniseries.

Dazzler was historically a reluctant hero. She dreamed of being a singer as a child, and once her mutant powers manifested, she decided to use them to launch her career as a pop star. This drew the attention of the X-Men and Hellfire Club, who fought over the right to recruit her. Ultimately she worked with the X-Men many times, but her career and fame have generally come first.

3 Namor Isn’t Afraid To Take What He Wants

Fans of the MCU were recently introduced to the imperious anti-hero Namor through Black Panther: Wakanda Forever. Comic fans, however, know him as one of Marvel’s oldest heroes, both in plot and publication date. Namor has fought alongside both the X-Men and the Avengers, among others, and has helped a lot of people.

One of the reasons Namor is generally considered an anti-hero is that he often has selfish motivations for his heroic actions. He is greedy for glory, both for himself and his kingdom of Atlantis. If his pride is hurt, he won’t hesitate to strike back, sometimes in horrific ways, as the people of Wakanda found out while at war with Atlantis.

The Scarlet Witch has no need for money. With her reality-bending Mutant abilities, she can create whatever she needs to get by. What Wanda truly craves is love and family, which powers can’t provide, despite many people’s attempts. Wanda wants to be a hero, but unfortunately her self-control needs work.

Over the years, the Scarlet Witch has lost control of her immense powers, often due to emotional anguish or personal loss. It’s certainly understandable that people make mistakes when they’re in pain, but Wanda tends to put her needs ahead of other’s very lives. Her intense and selfish desire to un-do things that have caused her pain have all too often been devastating for everyone else.

1 Deadpool Is A Merc With A Heart

Plenty of Marvel’s heroes have worked as mercenaries at one time or another, but one is more famous than any other–the Merc with a Mouth, Wade Wilson, aka Deadpool. Deadpool is not at all ashamed to be a mercenary, and he is good at what he does, though he’s also the ultimate loose cannon–he will do whatever seems like a good idea at the time.

Deadpool’s inability to die makes him the most persistent of foes. As a result, he can command top dollar for his services, so long as his clients are willing to overlook his more erratic tendencies. Despite his lust for money though, Deadpool has also acted heroically on many occasions, regardless of pay.

NEXT: 10 Marvel Characters With The Biggest Egos, Ranked