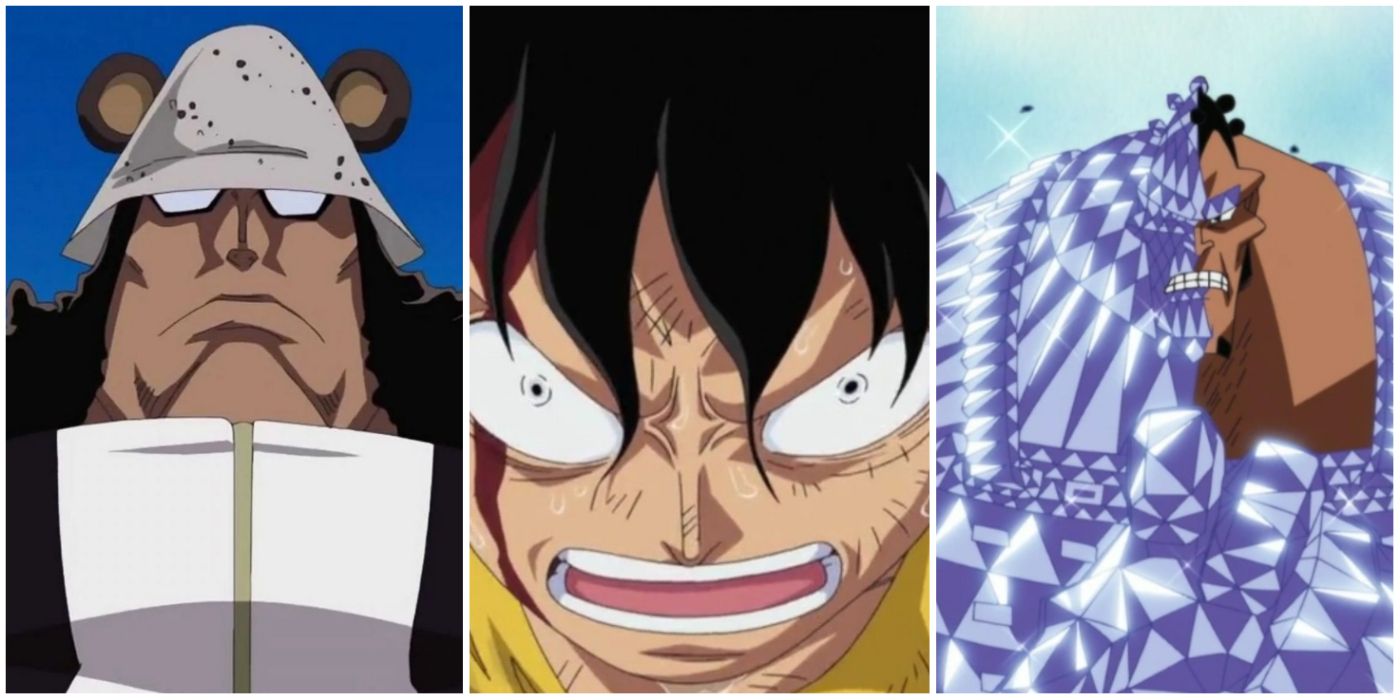 One Piece characters are known for their extreme durability. All too often, they survive what should be fatal encounters on account of tremendous resolve and stamina. Some criticize them for plot armor, yet their resilience has been fairly consistent throughout the narrative.

RELATED: 10 Overpowered Anime Abilities That Would Be Useless In Real Life

Over time, the series’ most durable individuals have proven that they can survive virtually anything. It makes them terrifying threats to behold, especially when combined with their formidable offensive prowess. Such individuals have the greatest chance of fulfilling their dreams since injury is of almost no risk to them relative to rivals.

Kuma was among the most durable of the Seven Warlords. His robotically enhanced body allowed him to protect the Thousand Sunny for a full two years before finally relinquishing it back to the Straw Hat Pirates.

Additionally, Kuma served as the template for the Pacifistas, nearly indestructible golems that the World Government used to combat Whitebeard’s forces. He survived unimaginable horrors by the hands of the Celestial Dragons even though it cost him his sanity. When combined with the versatile Paw-Paw Fruit, Kuma is nearly unbeatable.

Diamond Jozu’s Devil Fruit allowed him to harden his skin. This made him into a nearly impregnable bulwark that Whitebeard himself relied upon for defense. To Jozu’s credit, he accomplished his task with loyalty and efficiency. When hardened, Jozu was capable of surviving an attack from Mihawk, the world’s strongest swordsman.

Considering that Mihawk cleaved apart entire armadas with ease, Jozu’s capacity to stand against him illustrates the true extent of his Devil Fruit and why he was one of the most high ranking members of an emperor’s crew.

What made Doflamingo so powerful was how he combined durability with stamina. In Dressrosa, he diligently fought both Trafalgar Law and Monkey D. Luffy all while controlling Bellamy and gradually crushing the entire island in a bird cage.

Doflamingo survived the Op-Op Fruit’s direct impact against his internal organs, an attack that had the potential to damage characters as powerful as Big Mom. He also needed multiple uses of Gear Four to actually defeat, as he constantly stitched his body back together using the suturing potential behind his Devil Fruit.

“Big Gang” Bege was one of the Worst Generation’s most durable members. Although fairly flimsy in his base form, the Castle transformation allowed him to endure attacks from Big Mom herself. He withstood several minutes of unmitigated pummeling with only minor injuries to show for the brawl. Neither Law or Kid could have imitated such a feat of sheer tenacity.

RELATED: The 10 Most Brutal Tyrants In One Piece

This illustrates that when backed into a corner, Bege can provide an impregnable wall for his allies to take cover inside. Similarly, the Castle-Castle Fruit also has a reasonable amount of offensive potential since it nearly crushed Big Mom to death.

Marco “the Phoenix” is capable of withstanding virtually any attack. Granted, his body might not be indestructible, though he can regenerate almost endlessly based on how exhausted he is.

As a result, even attacks as powerful as Kizaru’s only inconvenience Marco from his mission. He used this incredible ability to fight against King and Queen – two of Kaido’s most powerful lieutenants – simultaneously. Marco’s combination of speed, stamina, and mobility are unmatched by anyone else in the series.

Roronoa Zoro’s durability has been a consistent theme of his character. This was seen as early as the Baratie arc, where he survived a direct attack from Mihawk himself. The swordsman was so impressed that he let him live and later even agreed to train him.

In the battle for Onigashima, Zoro also survived the full, unmitigated fury of Big Mom and Kaido’s combined attack. Granted, he had an ample chance to brace himself and block it, though no one else present could have endured the emperors’ violent burst of energy regardless of whether or not they were ready.

Big Mom’s skin was so infamously tough that not even Brook’s ultimate attack could pierce it. An unstoppable juggernaut, her durability and strength have both been compared to Kaido’s on multiple occasions.

Unlike other emperors, Big Mom had a number of weaknesses that could make her defenses completely collapse. For example, substantial emotional distress would weaken her to the extent of a normal person, and hunger caused a similar effect over time. Such shortcomings nearly allowed Bege to assassinate her when he otherwise never would have been able to.

Over the years, Luffy has survived attacks that should have reasonably killed him dozens of times over. He has been desiccated, poisoned, blown up, and even smashed in the head multiple times by Kaido’s Thunder Bagua, all to rise again.

Luffy’s durability is attributed to his Devil Fruit, legendary Haki, and the amazing genes he received from his father, Monkey D. Dragon. Although the captain’s adventures have allegedly shortened his lifespan, he’s survived direct attacks from some of the series’ most powerful characters even before the time skip.

2 Whitebeard Took On The World Government By Himself

Sometimes referred to as the world’s strongest man, Whitebeard’s durability was legendary. During the battle for Marineford, he endured hundreds of stab wounds, bullets, and even lava being pumped directly into his chest before finally going down.

This was all in spite of the fact that he was seventy-two years old and terminally ill at the time. In his prime, Whitebeard was more than too much for characters like Gol D. Roger and Kaido. He easily could have found Laugh Tale if such ambitions interested him.

1 Almost Nothing Could Penetrate Kaido’s Skin

Hailed as the strongest living creature, Kaido’s durability was unrivaled. His thick skin could not be penetrated by traditional attacks, as even Luffy’s famous “Gear Four” proved useless against him. In the end, Kaido’s defenses were so staggering that Luffy learned advanced armament Haki so that he could bypass his muscles and deal damage to his organs directly.

Aside from advanced Haki, the only thing capable of harming Kaido is a world-class swordsman and equally renowned blade. This was seen from his clashes with Zoro and Oden, both whom he admired for their unusually high strength.

NEXT: 10 Anime Characters Ruined By Tragedy