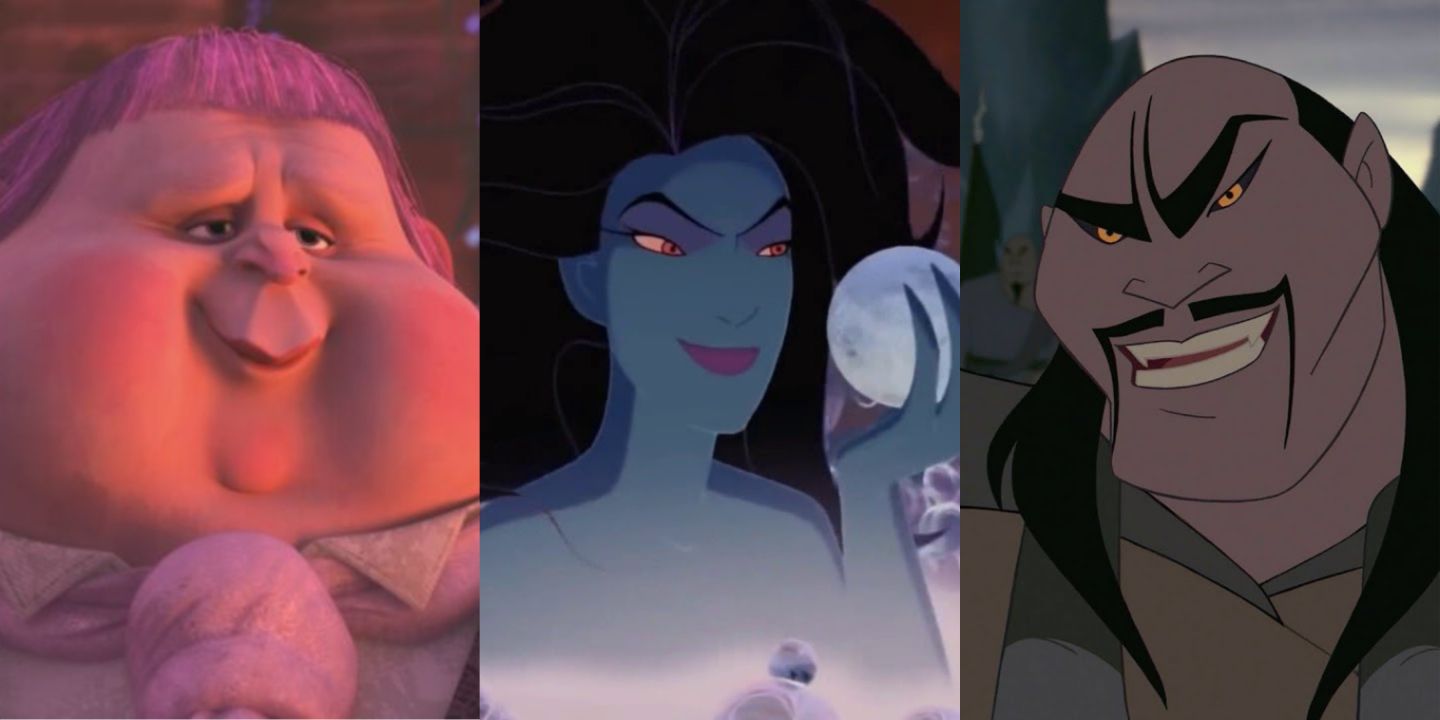 In general, animated villains are given redeeming qualities to make them less one-dimensional and more believable to watch. Young fans benefit from the nuance that no one is so ontologically evil, as it teaches good lessons about character development and redemption. This is seen with Namari in Raya and the Last Dragon and Kronk in The Emperor’s New Groove, both of whom redeemed themselves by the end.

However, some antagonists have repeatedly proved themselves to be irredeemable. Whether they deliberately go out of their way to specify how evil they are or simply demonstrate it through their actions, these monsters were hardly missed after their defeat.

10 Shan Yu Was A Merciless Conqueror

Shan Disney was Mulan‘s brutal and unyielding antagonist. His singular goal was to invade and take over China, which he had no problem doing so even at the cost of many people’s lives. He viewed the Great Wall as a personal affront to his strength.

Whether burning down villages or killing children, Shan Yu had almost no redeeming qualities. He didn’t even care that most of his men had been buried in an avalanche and were most likely dead. Instead, he pushed onward with his handful of survivors in hopes of completing his dark task.

9 Rasputin Was An Obsessive Wizard

Rasputin was the main antagonist of Anastasia. Though he was lacking in physical strength and durability, Rasputin was an incredibly powerful necromancer. He treated his henchmen horribly and spent his entire life trying to enact revenge against the titular protagonist’s bloodline, even though she personally never wronged him.

Rasputin’s means of killing Anastasia were also particularly dark. He hypnotized her in her dreams and then attempted to make her walk off her boat into the churning seas below. Were it not for her partner, Anastasia would have perished dozens of times over at Rasputin’s hands.

8 Hexxus Was An Evil Spirit Who Wanted To Destroy Nature

Hexxus was an ancient evil spirit in FernGully. He was once locked within a tree because his freedom put the entire forest in danger. Many people feared him, as his power had no clear limit.

Rather than attempting to destroy the forest himself, Hexxus collaborated with humans who had already begun his mission for him. Eventually, his puppets realized that they were being used, although Hexxus needed their machine much more than their obedience. As the physical manifestation of environmental collapse, Hexxus was specifically designed to not be redeemable, though he was pretty charismatic.

Governor Ratcliffe was a despicable racist who intended to incite violence between the settlers and Native Americans. He justified John Smith’s disappearance in order to go to war, as he needed the locals out of the way so he could excavate the region for gold.

Eventually, Pocahontas intervened and saved John’s life. When the settlers realized that the Native Americans weren’t evil, they stood down too. Infuriated that his plans were collapsing, Ratcliffe seized a nearby gun and fired it. Luckily, he was promptly detained. Nonetheless, he reappeared in a sequel and showed that he didn’t learn his lesson. There were many problematic elements in Pocahontas, and Governor Ratcliffe was one of the worst.

AUTO was a malevolent A.I. and the main antagonist of WALL-E. Its original responsibility was to ensure the humans’ safety as the planet was cleared of its excess waste. However, it soon became possessive of the humans to such an extent that it tried to destroy what little chance they had of returning to Earth.

Considering that AUTO was a machine, it was physically impossible for it to feel remorse for its actions or pity for the humans whose lives it was actively destroying. As such, it had no redeeming qualities.

The Quest For Camelot

Ruber was the callous and treacherous main antagonist in Quest For Camelot. Once a knight of Arthur’s court, his lust for power resulted in a betrayal of the kingdom. The aftermath left Arthur wounded and Kayley’s father dead. Ruber may have been ousted, but he had not given up on his claims to the throne.

Roughly a decade later, Ruber stole Excalibur and transformed his soldiers into an army of nearly unstoppable metal minions. Were it not for Kayley’s heroism, he could have taken over as Camelot’s new ruler. There are many moments in Quest For Camelot that show how brutal he is, like when he killed a dragon with his bare hands.

4 The Horned King Was A Malevolent Monster

The Horned King was the tough and strong antagonist of The Black Cauldron. His boundless mystical abilities gave him the ability to attack the realm with an entire legion of the undead. His ruthlessness and his determination made him one of the most irredeemable Disney antagonists.

Luckily, Taran and his friends stumbled into the Horned King’s captivity and had the idea of destroying the fortress from the inside. By obliterating the Black Cauldron itself, the Horned King’s entire plan unraveled. Although, it nearly cost Gurgi his life in the process.

3 Rothbart Was A Black Sorcerer And Political Schemer

In The Swan Princess, Rothbart was a black sorcerer. Although he was wholeheartedly convinced that he could take over Odette’s kingdom by force, he didn’t want to spend the rest of his life defending it from rebels. Therefore, Rothbart devised a plan.

Rothbart captured Odette, transformed her into a swan, and told her that she would remain one every day until she agreed to marry him. When she still refused, he transformed his own henchman into Odette and had her convince Derek to confess his love for her instead of his actual partner. Rothbart was so irredeemable that he made an entire musical number about why he was done being nice.

Puss In Boots: The Last Wish

Jack Horner was the main antagonist of Puss in Boots: The Last Wish. He used his baking empire to procure a number of valuable magical items that he weaponized against those who stood in his way. Jack was prepared to kill or harm anyone, regardless of what he thought of them.

Whether gleefully sacrificing his own henchmen or attempting to kill the physical embodiment of his conscience, Horner was comfortable with being labeled unapologetically evil. He was even willing to shoot a puppy in the face in order to make Puss surrender.

Sinbad‘s Eris was the goddess of discord and a physical manifestation of chaos itself. She loved plunging kingdoms into complete disrepair, as seen when she attempted to ruin Sinbad’s relationship with Proteus.

An irredeemable monster, Eris enjoyed preying upon mortal weakness most of all. For example, she wagered that Sinbad wouldn’t return for his execution if he didn’t retrieve the Book Of Peace. Because she was wrong, the Book was restored and no one had to die. Eris didn’t actually want to honor her word, but she was bound to as a goddess.