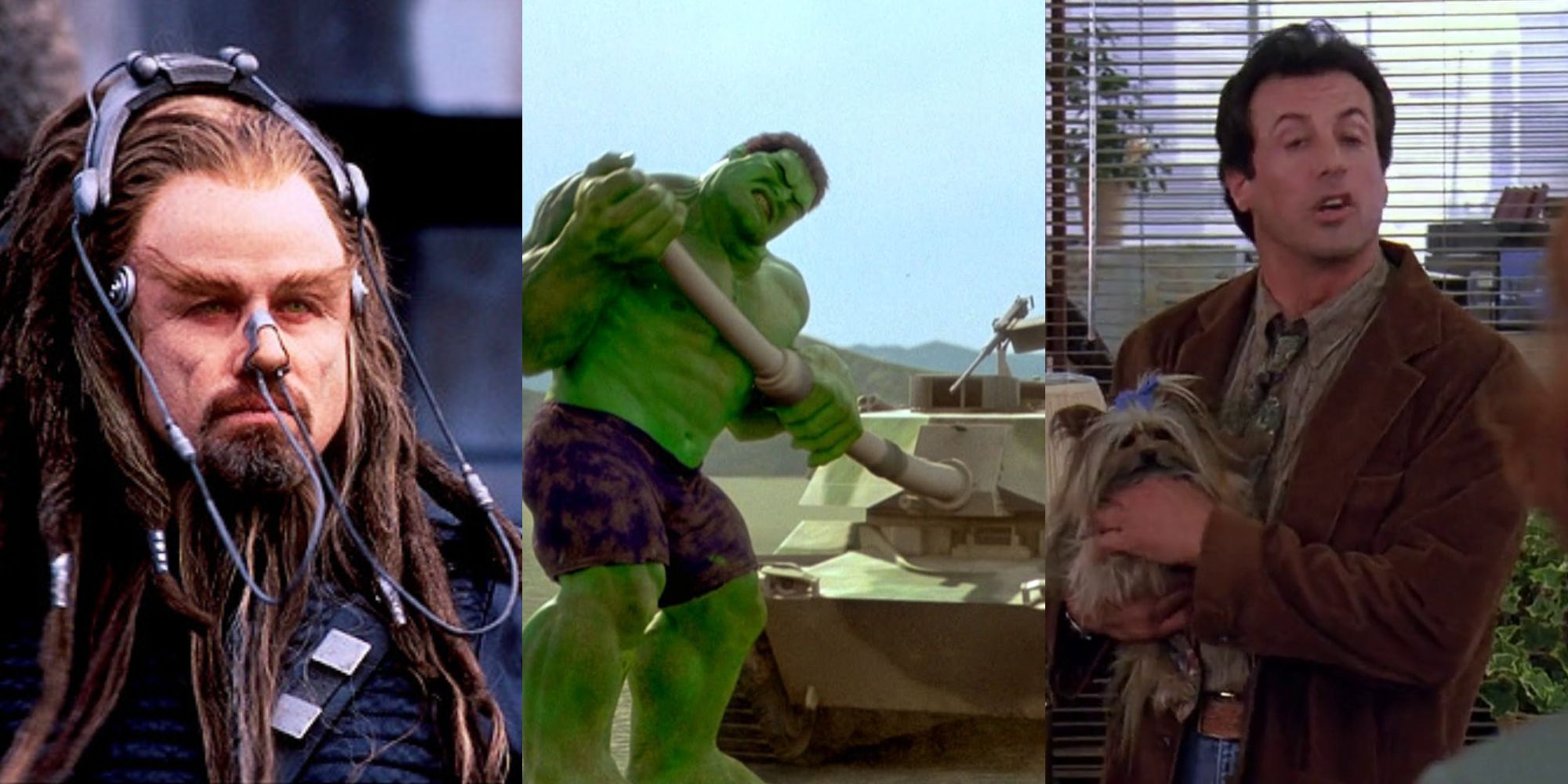 Hollywood movies have always experienced mixed reception from fans. Nowhere is this more true than when an A-list actor is cast in a Z-list production. Some films have even been so abysmal that they marked the decline or end of an actor’s career. Often, actors will take on these bad roles for a good salary or even personal reasons, only for the film to ultimately flop.

A movie can get forgotten by audiences for many reasons. Some are just so bad that they don’t even earn the “so bad it’s good” reputation others get. Meanwhile, others were rightfully never even given a chance, as some films prove their low quality just from the trailer.

10 Dirty Grandpa Was A Low Point For Robert De Niro

Robert De Niro has always been an incredibly versatile actor. However, for Dirty Grandpa, the Goodfellas actor went down the road of lewd, juvenile comedy that makes American Pie look like Oscar-bait by comparison. It remains one of the worst entries in the star’s career.

The movie was made in the style of films like The Hangover and Neighbors, with the intention of being as crude and profane as possible. The result saw De Niro transforming into a crass and cringe-worthy grandpa of the main protagonist. Thankfully, no one is in a rush to keep the movie relevant.

Released during the heights of both starring actors’ careers, The Siege is one of the most boring thrillers ever made. Starring Bruce Willis and Denzel Washington, both respected A-list actors, the movie was set in an America grappling with terrorism in the 1990s.

RELATED: 9 Movie Villains Whose Actors Are Actually The Nicest People

The Siege follows two agents trying to prevent a major terrorist attack. In some ways prophetic, the 1998 film explored how the government risked freedom in the pursuit of security, culminating in almost a police state level of military rule. However, it was simply a dull film that couldn’t deliver the tension it could have.

Ang Lee’s Hulk had an impressive cast that included Eric Bana, Nick Nolte, Sam Elliott, and Jennifer Connelly. However, it’s one of the worst superhero movies ever created. With its abysmal CGI, weird plot, and strange alterations to the source material, it’s easily one of the worst Marvel movies.

Hulk was forgotten not long after release and, when Universal soft-rebooted the character in 2008, was immediately replaced with a better film. Despite having an ensemble cast of talented actors, the movie was one of the worst of each performer’s career and rightfully forgotten.

The first Sin City movie was a great film and held true to the comic book source material. However, the sequel was entirely forgettable. Starring an ensemble cast of Eva Green, Mickey Rourke, Josh Brolin, and Joseph Gordon-Levitt, Sin City 2: A Dame To Kill For was just disappointing.

Sin City is a great world with good characters, but it didn’t need a sequel. Especially considering the fact the first film killed off almost all of its protagonists. The sequel was simply too slow, too boring, and released far too long after the first to be relevant.

6 Superman IV: The Quest For Peace Was Rightfully Memory-Holed

The final of Christopher Reeve’s Superman films before his tragic accident, The Quest For Peace was just a terrible film. However, the production’s issues were largely the result of a studio in financial collapse at the time of filming, which could be seen in the finished product.

Superman IV suffers from issues across the board. The poorly executed plot, terrible visual effects, bad editing, and plot holes are among the reasons this is considered one of the worst films ever made. Reeve was perfect for the role of Superman, but this film just couldn’t deliver what fans wanted.

5 Stop! Or My Mom Will Shoot Was The Low Point Of Stallone’s Career

Famously regretted by Sylvester Stallone himself, Stop! Or My Mom Will Shoot followed a cop whose mother came to stay with him. Rather than be a regular house guest, his mother joins him on his cases and causes problems for him at work in a bad play on the buddy cop genre.

Stop! Or My Mom Will Shoot is often quoted by critics and Stallone fans alike as one of the dumbest movies of all time. The actor himself has acknowledged the role as a big mistake for his career and joked that Arnold Schwarzenegger tricked him into doing it.

John Travolta’s choice to star in Battlefield Earth had more to do with his private beliefs than it did with the quality of the film. The Scientologist actor signed on to the film, which adapted the writings of the religion’s founder, L. Ron Hubbard. However, it was one of the worst films ever made.

Battlefield Earth is widely regarded as a vanity piece, only created due to Travolta’s ties to the Church of Scientology. The movie has no redeeming features, and even though Travolta may have been well-motivated, he didn’t turn in his best performance.

Starring Josh Brolin and John Malkovich, Jonah Hex adapted the western bounty hunter hero of DC Comics into a movie. What had been a fun comic book western felt more like a cheap, rushed TV movie than the cinematic release it actually was — and it definitely showed.

Jonah Hex turned out to be one of the studios’ biggest flops, making just $10 million. The reality is the character was always destined for TV format, where creators could match the done-in-one nature of the comics. The film had no meaningful plot and dwelled too much on the character’s past.

The Spirit was based on an old comic book character and tried to match the energy and tone of 2001’s Sin City. However, it was a complete failure. A major issue is The Spirit was never supposed to be like Sin City. The former was a classic Golden Age detective to the latter’s gritty, modern crime noir.

The Spirit’s mismatched tone, black-and-white format, and poor execution on the screen just couldn’t be salvaged. Even Samuel L. Jackson as the film’s villain wasn’t enough to get audiences to show up to support the Golden Age detective’s heroics.

Crash is so terrible it’s famous for it. The movie, despite winning an Oscar, has been forgotten by audiences for its shallow social commentary and dull plot. Despite a true ensemble cast that included Matt Dillon, Thandie Newton, Don Cheadle, and Brendan Fraser, it’s considered one of the worst films of all time.

Crash is set in Los Angeles and uses topics like race, crime, and class to bring together its characters in a single story. However, its execution was incredibly ham-fisted and awkward, and nobody paid any attention to it other than the academy.