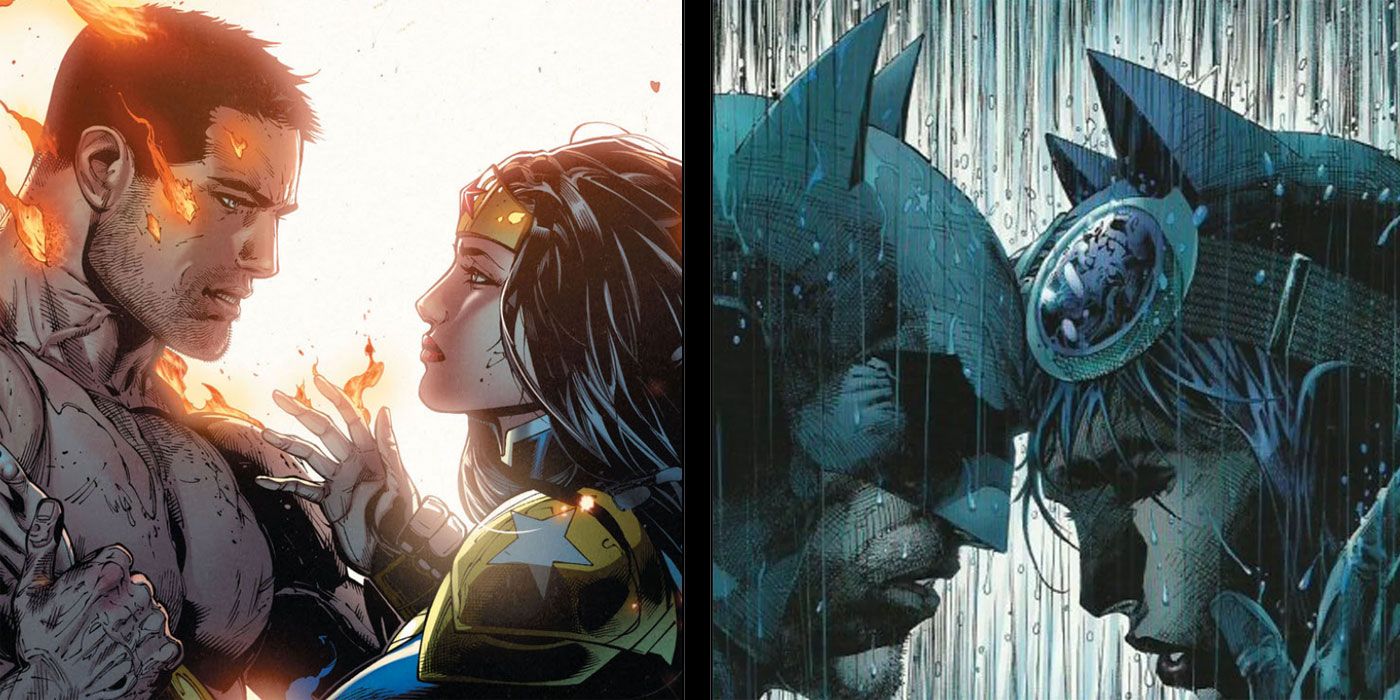 In DC Comics, there have been many romances among the characters inhabiting the stories. Some are long-term, tying two characters together in the mind of the readers. Unfortunately, actual human relationships often get reflected in comic books as the breakup of a couple.

Some breakups are relatively minor and don’t send ripples out, fading into the footnotes of comic book history. Then there are the intense breakups, some sad splits, and those just doomed from the beginning. Sometimes, the relationship between characters gets to the end, with both of them not wanting to acknowledge it until it’s too evident to ignore.

In the Legion of Super-Heroes, some couples seemed to be steadfast. They started in the Silver Age and were a couple up until Legion of Super-Heroes #295 by Paul Levitz, Keith Giffen, Howard Bender, Dave Hunt, Carl Gafford, and John Costanza. Light Lass struggled in the relationship for some time, especially after seeing Timber Wolf embracing Saturn Girl.

After the Legion defeats Darkseid, Light Lass decides to leave the Legion. She asks Timber Wolf to go with her, but he declines. She leaves, later returning, but the breakup with Timber Wolf was permanent.

Green Arrow and Black Canary always seemed to be tumultuous. Most of the time they broke up in the past were Green Arrow’s fault. He was unfaithful and kept secrets, but Black Canary would come back to him after a while. Then he killed the supervillain Prometheus and found himself behind bars.

Green Arrow didn’t tell his wife about killing Prometheus. For Black Canary, this was another case of him putting metaphorical walls between them. Setting down her ring, Black Canary walked out, leaving Green Arrow alone, as she believed he always wanted.

8 Superman & Wonder Woman Ended As Unsatisfying As It Began

One of the New 52’s most controversial couples, Wonder Woman and Superman, dated until Lois Lane exposed Superman’s secret identity. While Lois had good intentions, the effects were devastating, with Superman resenting Lois. Eventually, this feeling extends to Wonder Woman.

Superman/Wonder Woman #20-22, by Peter Tomasi and Doug Mahnke, showed the tension reaching its obvious conclusion. When questioning Lois Lane and Clark’s other friends, Wonder uses her Lasso of Truth. This upsets Superman, who then attempts to regain all of his powers by flying a Justice League shuttle near the sun. Wonder Woman saves him, and he uses the moment to tell her, “I don’t think I love you anymore.”

In the third incarnation of the Legion, commonly called the “Threeboot,” the one Legion relationship still intact was Lightning Lad and Saturn Girl. Saturn Girl felt ignored after Lightning Lad became Legion’s leader. One night, she snuck into a pantry with Ultra Boy, but Invisible Kid discovered them.

Saturn Girl confessed everything to Lightning Lad. He was angry, and she left the room in tears. Brainiac 5 came in immediately afterward and asked if he was interrupting anything. Lightning Lad responded with an ice-cold, “No, we’re finished.”

6 Raven Attacked Nightwing & Starfire & They Went Downhill From There

Under a lot of stress, Nightwing decided to take the drastic step of marrying his on-and-off girlfriend, Starfire. Raven, now a villain, broke up the wedding and infected Starfire with the spirit of one of Trigon’s children. This drove her to near-insanity and death, but Nightwing vowed to stay with her. They left the Titans.

Starfire was troubled by the voice of Raven constantly taunting her mind. In conquering her troubled mind, she realized that she couldn’t stay with Nightwing until they had found themselves as individuals. She threw herself into her Tamaranean heritage, and by the time she recovered, she still felt like she and Nightwing needed to be apart.

Clark Kent and Lois Lane were engaged, but Lois soon realized there would be a third person in their lives, Superman. Clark knew something was bothering Lois, but he thought it was jealousy over his old girlfriend, Lori Lemaris. The problems were more complicated than another woman.

Clark Kent would always place his responsibilities as Superman before anything else. This included the most important person in his life. Lois got to a point where she couldn’t handle it and left Superman the engagement ring behind after he left in the middle of a discussion about this fact.

The engagement of Batwoman Kate Kane and police officer Maggie Sawyer was a reason for fans to rejoice in 2013. For a long time, Kate Kane’s love life suffered. Her most successful relationship with Renee Montoya ended horribly. Amid a custody battle with Maggie’s ex-husband, Kate left a letter for Maggie explaining that Maggie needed to spend time with her daughter.

Kate had struck a deal with Maggie’s ex. The actual beginnings of the breakup came from DC Editorial kept the two from marrying as part of a line-wide mandate against happy marriages for DC characters. Creators J.H. Williams III and Haden Blackman left in protest and vocally gave the interference as the reason.

Harley Quinn turned over a new leaf in 2021, becoming a hero in Gotham City. One last obstacle in her path to redemption was her girlfriend, Poison Ivy. The two had been through so much together, and their relationship was a large part of the Harley Quinn animated series.

In Harley Quinn #10, by Stephanie Phillips, Laura Braga, Arif Prianto, and Deron Bennett, Poison Ivy is Harley’s date to a museum gala. Poison Ivy wants to use the opportunity to steal a priceless diamond, which causes Harley to reassess where each of them is in their lives. She breaks up with Ivy, but she lets her know that once she finds herself, they can try again. Fortunately, it looks like they might get back together in an upcoming issue of Poison Ivy.

2 Aquaman & Mera Split After He Failed To Save Their Son

Black Manta kidnapped Aquaman’s son in Adventure Comics #452 by David Michelinie, Jim Aparo, and Jerry Serpe. He forced Aquaman to fight Aqualad to the death for his son’s life. Unfortunately, the small child died, asphyxiating in an air-filled container.

RELATED: The Worst Days In The Lives Of 10 DC Heroes

Aquaman’s failure drove Mera to leave him. She blamed him for their son’s death. Black Manta went on to desecrate the child’s grave, continuing to attack Aquaman on an emotional level. It would take years before Mera and Aquaman could repair their marriage.

The wedding of Batman and Catwoman was a drawn-out story weaving through multiple titles. It was built up as a massive event that would change a corner of the DC Universe for all time. When the time came for them to get married, fans cried out when they saw Selina Kyle leave Bruce Wayne standing on a rooftop.

Convinced by her friend, Holly Robinson, that if Bruce Wayne is happy, he couldn’t be Batman, she left him in the hours before dawn. It was a betrayal to fans that had been convinced this was going to have a happy ending. Unfortunately, they were left with the maintained status quo of a brooding Batman that couldn’t find love.