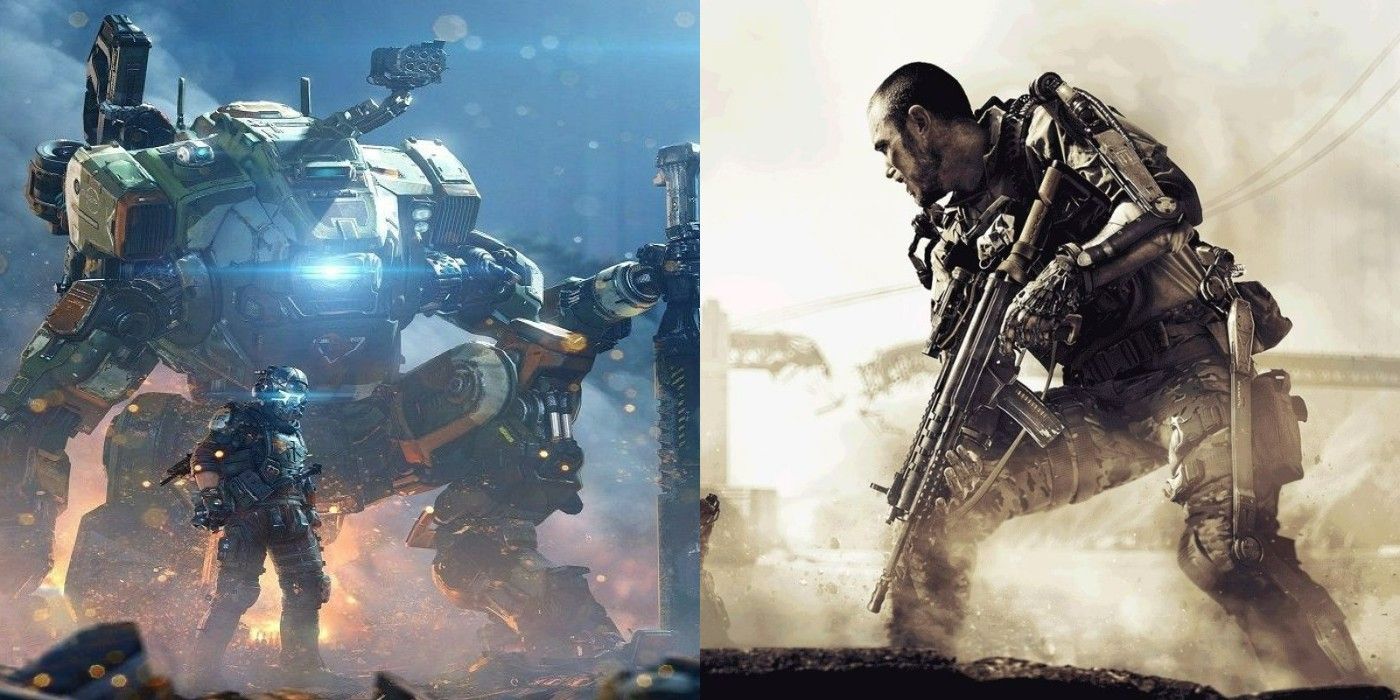 RELATED: 10 Most Expensive Video Games That Got Canceled

Over the decades, these various genres have produced a myriad of different versions of power armor. Among all these weapons of war, only a few have made a true splash. The toughest suits of power armor are some of the most iconic and undoubtedly the strongest. When someone says the words “power armor,” the best of the best come to mind.

The Call Of Duty series has been going strong for decades since the early 2000s, and it’s been trying to innovate on its successful formula, but some innovations weren’t received well by the fans. Call of Duty: Advanced Warfare was one of those entries, and while it made a mark with memes and some impressive cast performances, the multiplayer and zombie modes weren’t very popular.

What hasn’t really been forgotten is Advanced Warfare‘s main attraction, the Exo Suits. Based on existing military prototypes of powered exoskeletons, the Exo Suits provided its user with extra strength, mobility, and providing tactical utility. It wouldn’t be surprising to see special forces deploying with very similar equipment in the next decade.

9 The Last Remnants Of A Bygone Age, The T-60 Power Armor Still Dominates The Battlefield

Power armor is the face of the Fallout franchise, and for good reason. In every iteration, attaining Power Armor turns the player into a far more dangerous warrior. Much like many other weapons and technologies of the series, Power Armor also serves as a potent symbol for the factions that wear it.

For the Brotherhood of Steel, it is a beacon of hope, but for the villainous Enclave, it is a threatening sign of their power and ability to dominate the wasteland. Importantly, Power Armor cannot be made after the Great War, so every single piece of the suit is a critical resource. A soldier wearing power armor carries the durability and firepower of a tank, however, so sending soldiers out in them isn’t exactly risky.

R.A.G.E. Armor is arguably the pinnacle of the Resistance’s power armor. Made from the skin of the genetically modified Berserker Queen, the suit gives its user super strength, as well as enhanced agility, and the ability to carry powerful munitions such as the plasma launcher.

Despite a lengthy development time and backlash to its monetization, Marvel’s Avengers still delivered an enthralling superhero action game. It had an uphill battle, having to create multiple different play styles for different Avengers, unlike other titles which focused on a single hero.

Marvel still made each hero feel unique, and players truly felt invincible when donning Iron Man’s famous armor. Iron Man’s armor grants him flight, enhanced strength, and the ability to attack his enemies with beams of energy, including his powerful chest unibeam.

Star Wars: Dark Forces may appear to be a simple Doom clone at first, but it was actually revolutionary for its time. Unlike many other LucasArts projects that never hit shelves, Dark Forces also became a staple of Star Wars for decades to come. While its sequels primarily focused on the hero Kyle Katarn’s journey as a Jedi, Dark Forces was all about Katarn as a hero of the Rebellion.

When an entire Rebel base is mysteriously wiped out, Kyle is sent to investigate. He later learns that a few of the new Dark Troopers destroyed the base single-handedly. While only a few Phase III prototypes were ever produced, these powered exoskeletons would’ve given Imperial Stormtroopers the armor and firepower to take on entire Rebel cells alone, and one need only look at The Mandalorian to see just how scary facing down a horde of them would be.

5 MJOLNIR Armor Is One Of Humanity’s Greatest Weapons

The Master Chief is the face of Halo, only ever seen in his famous MJOLNIR armor. From FPS games to strategy, the Spartans and their MJOLNIR armor remain a near unstoppable force. While incredibly powerful, especially with their energy shields, only a Spartan could utilize it. Without their enhanced reflexes and bone density, the enhanced strength of the suit would shatter their bodies with every twitch.

MJOLNIR armor makes the Spartans capable of amazing feats, and gives them the ability to take on entire armies of Covenant soldiers, or makes them perfect for infiltration missions against insurrectionist forces. Most importantly, for the future of the Halo universe, its sealed armor and energy shields make a Spartan in MJOLNIR armor ideal for combating Flood infestations.

4 Titans Are Beyond Advanced

The Titans of Titanfall are the incredibly advanced mechs and are in-universe the future of modern prototype exoskeletons. They are a fantastic example of the blurry line between mechs and powered armor. Essentially, every mech is also a suit of power armor, everything from the power loader from Aliens to the Zords in Power Rangers, just over sized.

The Titans are the perfect case study for this. They grant their pilots extremely high mobility, incredible durability, and overwhelming firepower. They’re perfect for combating groups of infantry, or other Titans, and can even operate independently of their pilot due to their advanced AI.

Renowned as one of the greatest RTS games of all time, Starcraft remains popular almost a decade since its last major release. This is largely due to the emphasis on small-unit tactics and micromanagement. Because of this, the utility and strength of the Terran Marines is extremely important.

The powerful Terran Marine armor gives them the durability and firepower for a few squads to take out almost any threat they face. This was a dangerous trade, however, as many marines were indoctrinated criminals who had been sealed inside their armor by the Dominion.

2 When In Power Armor, Space Marines Ascend Beyond Humanity

More and more people are learning about Warhammer 40,000, especially now that Superman and super geek Henry Cavill has announced he’ll be bringing a Warhammer series to Amazon Prime. The face of the franchise has always been the Adeptus Astartes, the Space Marines, and their iconic armor. Whether painting miniatures for the tabletop or commanding an army of marines in the famous Dawn of War RTS series, the Space Marines are Warhammer 40,000 personified.

Their armor weighs hundreds of pounds, and only through intense modification of Marines with additional organs, muscles, and incredible bone strength can a Marine even bear the weight of the armor, much less move in it. The strength of Marines allows them to use the armor to increase their speed and power to unbelievable levels and makes them all but unkillable.

1 The Praetor Suit Is Literally Invincible

The grandfather of all first-person shooters, Doom brought itself back into the mainstream with a vengeance. Upgrading the Doom Marine’s simple armor into the Praetor Suit of the Doom Slayer was just one of many changes. This ancient armor protects the Doom Slayer and increases his already unstoppable strength, speed, and resilience.

The armor is never even once seen to be damaged. The only time it is ever seemingly damaged is in between the events of Doom (2016) and Doom Eternal, presumably when the Slayer flexed so hard his muscles bulged out of the armor. The Praetor Suit gives the Slayer the power to take on the armies of both Heaven and Hell alone and come out victorious.