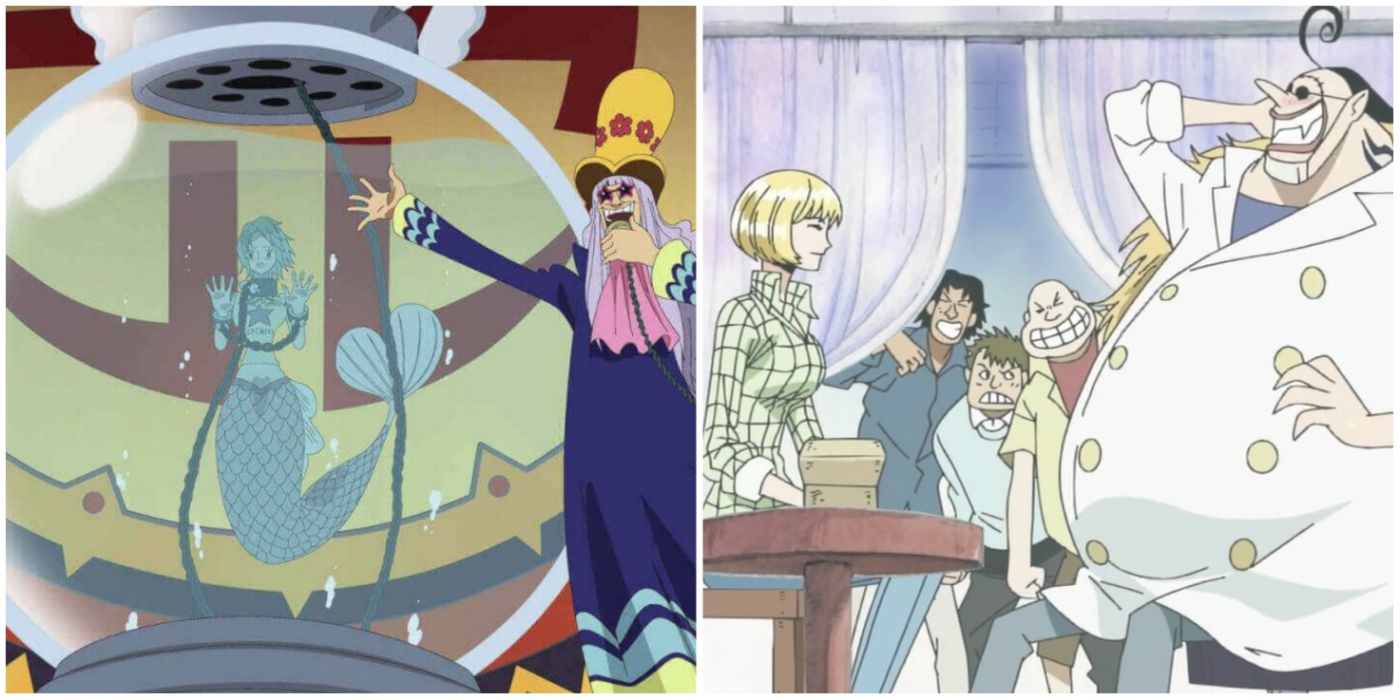 There has been much heated debate regarding whether or not One Piece is a kids’ show. This was particularly prominent when 4Kids bought the rights to air it and made “changes” based on what they thought was suitable for their audience.

Despite the series following Luffy’s happy-go-lucky adventures, there are many moments that 4Kids could not have hoped to censor should they have continued with the series. These instances illustrate how the anime is specifically tailored for adults and why its universe is significantly darker than one might initially assume.

The Sabaody Black Market primarily sells people. As a result, the concept is already unfriendly to children and particularly gruesome to watch. Hachi begs the Straw Hats not to intervene despite being shot several times, which may convey the wrong message about standing down in the face of oppression.

Perhaps the darkest aspect of this scene was what Charloss actually intended to do with Camie once he bought her. The Celestial Dragon was going to put her in a tank with one of his carnivorous fish and watch her swim for her life.

9 Cindry’s Backstory Was The Darkest Part Of Thriller Bark

Although Thriller Bark was decidedly disturbing, Cindry was handily its most morbid aspect. Doctor Hogback was so obsessed with her body that he collected it after a fatal “accident” and brought it to Gecko Moria for reanimation.

Infused with an innocent woman’s shadow, Hogback effectively transformed Cindry into his permanent slave. Considering that she constantly threw plates at him, Cindry was clearly at least somewhat aware of her circumstances, albeit powerless to do anything about them. Hogback’s lechery is too much serious for children to process.

Akainu’s battle with Whitebeard was among the goriest moments in the anime. Originally, he destroyed a significant part of Whitebeard’s head with lava-based attacks. It was censored to singe his mustache, yet there were still two bloody, gaping holes in the emperor’s body.

Additionally, Whitebeard’s fate of being shot to death is much too violent for children to process. It is in stark contrast to Helmeppo’s standoff with Luffy, where even the gun he held to Koby’s face was edited by 4Kids. Considering how essential Whitebeard’s death is to the future of the series, its details are impossible to sugar coat.

7 Arlong Killed Bell-Mere In Front Of Her Children

Perhaps the most graphic part of the East Blue arc was when Arlong shot Bell-mere in the head. He would not tolerate her blatant defiance of his new reign and sought to make an example of her. It was especially traumatic for Nami and her sister, who were forced to watch his greatest act of barbarism.

4Kids attempted to censor this by having Arlong “send Bell-mere to the dungeon.” However, it didn’t make sense within the grand scheme of the series because she was never released after his defeat.

6 Yasui Was Publicly Executed In Front Of A Laughing Audience

Yasui’s death was already inappropriate for children since he was the victim of a brutal firing squad. Unlike most of the series’ characters, he did not have plot armor and wasn’t saved at the eleventh hour. Worse yet, his execution itself was shown in graphic detail.

Additionally, Yasui’s own neighbors and family laughed while he was being murdered. This was on account of the S.M.I.L.E Fruit, which forced them into a constant state of hysteria regardless of how they actually felt. It made the scene much too gruesome and emotionally charged for kids.

5 Hancock Was A Victim Of The Celestial Dragons

Boa Hancock’s story is deeply unsuitable for children. Hancock was enslaved as a girl and branded by the Celestial Dragons. She only narrowly escaped after Fisher Tiger’s violent breakout. Hancock spent much time afterward with an unhealthy misandrist.

Hancock developed a strong hatred toward men to such an extent that she even refused their presence on the island. This is certainly too morbid for children. Additionally, it could also send the wrong message that a “boys versus girls” mentality is a good thing.

4 Doflamingo’s Toy Operations Were The Stuff Of Nightmares

Doflamingo used Sugar in order to turn enemies into toys. They were promptly put to use in his underground smuggling operations, where their inexhaustible bodies could serve in the night and interact with others in the day.

RELATED: The 10 Luckiest Characters In One Piece, Ranked

Such a concept was completely horrific. Not only did the toys gradually wear down their bodies until they were broken and useless, but their entire identities were also forgotten by friends and family. Even Kyros — the least affected by Sugar’s power — needed to reestablish his relationship with his own daughter after reuniting with her.

Ace’s death was one of the most memorable points in the entire series. Pushed to rage by Akainu’s taunting, he was eventually struck through the chest by a magma fist. This killed him nearly instantly, leaving Luffy to clutch his lifeless corpse.

It may not have ultimately been as gory as Whitebeard’s death, but audiences spent much more time with Ace. As a result, it may be more difficult for kids to stomach, especially since there’s no chance that Ace will somehow return to life in working condition.

Vander Decken may not have been a primary antagonist, but he was deeply disturbing. He spent most of Shirahoshi’s life stalking her, which was particularly eerie considering her age at the time.

Decken’s predatory nature may be a valuable lesson in “stranger danger,” though it’s still far too serious of a topic to broach for an allegedly kid-friendly pirate show. He may have ultimately faced justice for his crimes, but Shirahoshi will never regain the years she lost fearing for her life in the shadow of his obsession.

Sanji’s interest in women has become increasingly creepy ever since he was introduced. This was first meaningfully seen in Thriller Bark, where he admitted to wishing he could spy on women with the Clear-Clear Fruit.

Later, Sanji showed such excessive lust for mermaids that it physically hospitalized him. He was also interested in visiting Onigashima’s pleasure district over actually fighting the battle, which was particularly unbecoming of his role as a protagonist. Sanji’s behavior has reduced the entire Straw Hat crew’s credibility since, although his actions are chastised, they are never meaningfully addressed.

NEXT: All Straw Hats In One Piece, Ranked From Least To Most Problematic