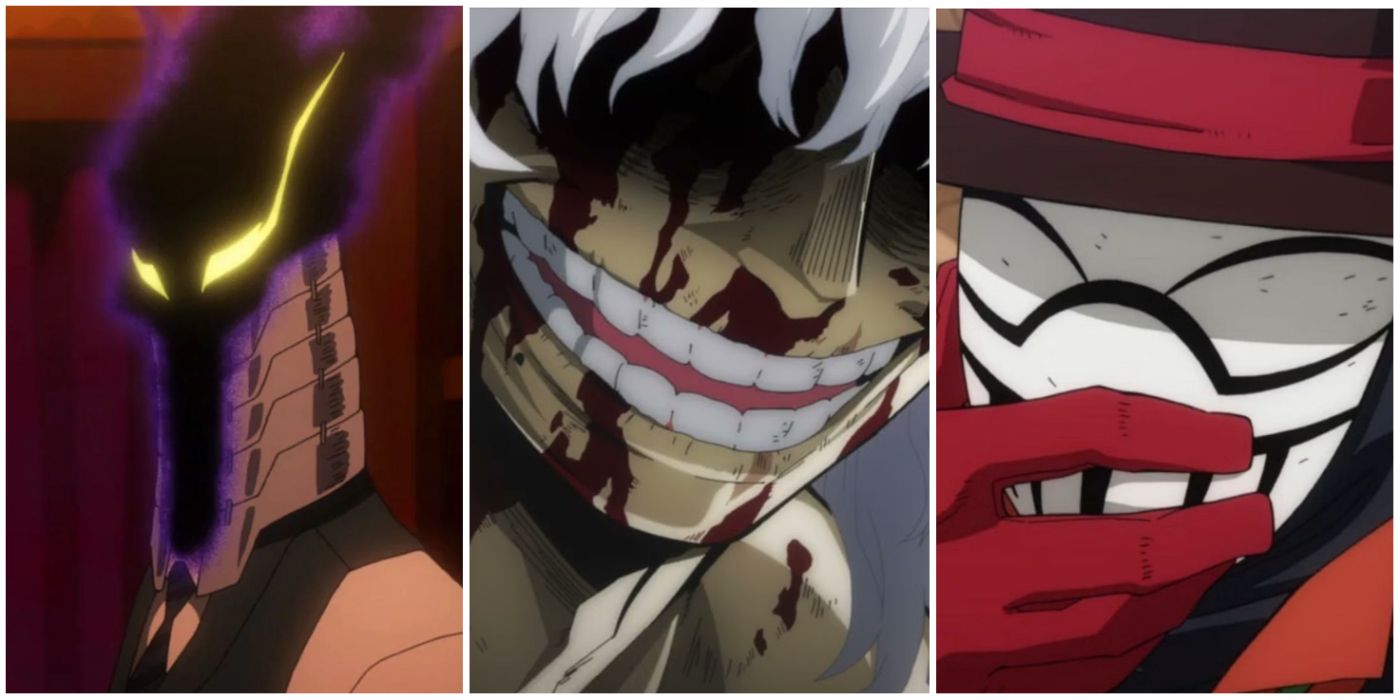 The League Of Villains are the main antagonists in My Hero Academia. Cobbled together from the worst aspects of society, their single goal is to destroy the existing order and to serve Tomura Shigaraki. Despite having little in common aside from hatred, the League’s members care deeply for one another.

In many instances, they risk their lives for their comrades’ safety just like their heroic counterparts. The League’s sense of community help to humanize them and make them more believable as an organization. Moreover, it ultimately suits All For One’s best interest since his henchmen have greater longevity.

10 Shigaraki Saved The League From Overhaul

After All For One’s imprisonment, there was a glaring power vacuum within Japan’s criminal underworld. Overhaul hoped to seize this opportunity by assimilating the League Of Villains. When Shigaraki refused, the two parties came to blows, with Magne dying in the process.

Understanding that the League lacked resources, Shigaraki negotiated with Overhaul and agreed to lend him Twice and Toga. By doing so, he bought his comrades time until the professional heroes arrived and took Overhaul down for him. Once Overhaul was defeated, Shigaraki emerged to take his revenge.

When the pro heroes made their move, the League was completely unprepared. Toga and Compress were caught off-guard by an encroaching hero and immediately restrained. It seemed as though they’d never make it to Gigantomachia and that their freedom was about to come to an end.

However, one of Twice’s clones stabbed the hero, forcing him to release his new prisoners. Toga was overjoyed at Twice’s assistance, only to realize that his actual body was dying. Twice’s final clone collapsed before Toga’s eyes, with the last of his strength used to save her.

8 Spinner Saved Shigaraki By Waking Him Up

Shigaraki’s confrontation with the heroes left him worse for wear. Between having his power constantly neutralized and his body significantly burned, the villain’s unconsciousness enabled his foes to advance. Desperate to avoid capture, Spinner did whatever it took to wake Shigaraki up.

Eventually, he got so desperate that he even bit him to get things going. Although Shigaraki’s body began to move once again, it was clear that its former host was not entirely there. The League may have escaped, but All For One’s influence became even more overbearing.

Twice’s fractured psyche made him most comfortable wearing his mask. When it was torn during the attack on Overhaul’s hideout, he panicked and lost control of himself. Respecting Twice’s condition and hoping to address it, Toga bandaged his damaged mask.

RELATED: 10 Harsh Realities Of Being Hawks In My Hero Academia

This calmed him down and made him realize how amazing his friends were within the League itself. From that moment forward, Twice and Toga had the most positive relationship out of the entire League. It made the former’s death particularly heartbreaking and compelled Toga to go on a journey of self discovery.

Geten proved a particularly difficult adversary for the villains to defeat given his access to nearby ice. Luckily, Dabi’s fire proved an excellent counter, allowing him to protect his allies while they focused on less consequential opponents.

Dabi’s efforts may have been selfish, but they had an outstandingly positive effect. Since Geten operated at a higher caliber of force than his comrades, he was perhaps the only person who could have stopped Twice’s clones before they multiplied out of control. Holding him off was perhaps the League ‘most underrated victory of the entire arc.

5 Kurogiri Saved Shigaraki From Being Captured At U.A

When Shigaraki first arrived at U.A, he was unprepared and inexperienced. Although the prime nomu proved a worthy obstacle for All Might, his defeat was sorely felt. Shigaraki’s petty criminals also didn’t last long, meaning that he was rapidly running out of allies.

When Snipe arrived, he shot Shigaraki multiple times in his arms and legs. Should Kurogiri not have promptly warped him to safety, he would have been captured immediately. In this regard, Kurogiri single-handedly saved the League in its infancy.

When Best Jeanist captured the League in iron threads, their total defeat was inevitable. With Gigantomachia sedated, a once promising escape now almost seemed hopeless. By compressing part of his own body, Compress created enough wiggle room to escape from his bonds.

He then compressed and released his colleagues, allowing them to move freely about the battlefield. It gave Spinner the chance to wake Shigaraki up, who then procured their narrow escape. However, Compress was arrested in the process, meaning that the League lost one of its most indispensable members.

3 Kurogiri Prevented The League From Killing Each Other

When Shigaraki first met Toga and Dabi, their reactions were less than positive. As former adherents of Stain’s ideology, they promptly attacked one another with full force. Since Kurogiri was nearby, he had the foresight to use his Warp Gate in order to negate attacks from all fronts.

With none of the villains capable of killing each other, they were forced to resolve their differences with words and actually found a common cause. Kurogiri’s actions helped expand the League into the powerhouse it currently is.

Having exhausted herself against Chitose, Toga was unprepared for Skeptic’s coup de grâce. Twice could only watch in horror as he was being tortured, only to realize that his pain meant that he wasn’t a clone. Exhilarated from this revelation, Twice duplicated himself so many times that his bodies literally flooded the streets.

He had more than enough copies to save Toga from certain death and repay her for the kindness she had shown to him. Twice’s uncanny act of bravery made him one of the few people Toga actually cared about.

During the heroes’ unexpected ambush, Shigaraki was the League’s last line of defense. He single-handedly turned the tide back in the villains’ favor, with heavy hitting pros like Aizawa and Endeavor being dedicated solely to his capture.

Without Shigaraki’s presence, the heroes would have been able to defeat Garaki’s nomu and move onto the weaker villains without incident. His importance was especially clear through the fact that once he fell unconscious, the battle was over and the villains dispersed almost immediately. Shigaraki may still want to destroy the world, though comrades are an important priority to him.

NEXT: The 10 Grossest Anime Cannibals