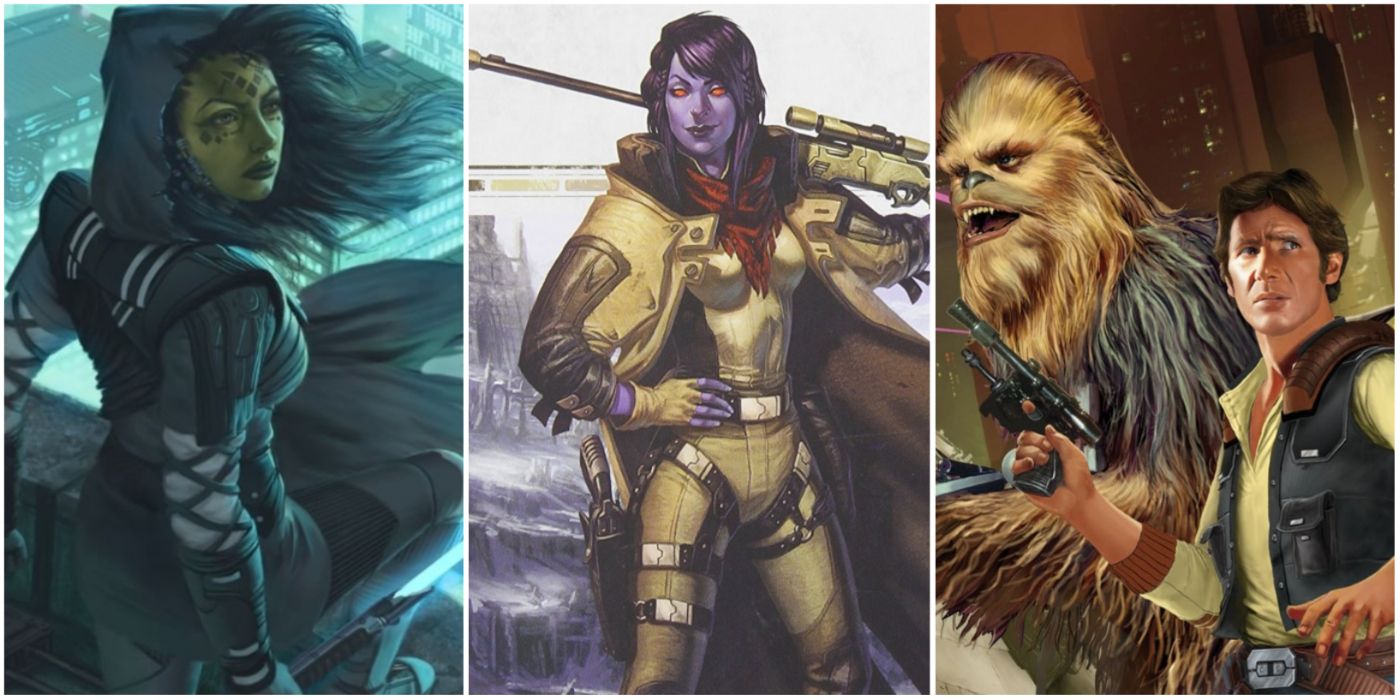 Character creation can be one of the most fun parts of any TTRPG. It’s like a game in its own right and blends both storytelling and mechanics. Players carve out a small part of the game’s world as their own. They create something, in partnership with the GM, that belongs to them.

Fantasy Flight Games’ Star Wars Roleplaying Game has an excellent character creation system. Nonetheless, it’s very unique and can be daunting for new players, even if they have experience with class-based systems like Dungeons & Dragons. With a few tips, however, Star Wars fans can start creating effective characters in the beloved galaxy far, far away.

10 Be Mindful Of The Gameline

The Star Wars Roleplaying Game is notably split into three gamelines, each of which covers a different part of the galaxy. Edge of the Empire follows bounty hunters, explorers, smugglers, and other underworld types. Age of Rebellion focuses on the struggle between the Rebellion and the Empire. Force and Destiny deals with fugitive Jedi.

It’s important to be mindful of the gameline when creating a character, though it’s not an absolute restriction. The gamelines are completely compatible with one another. As long as the GM agrees, players should use every resource they want. The Star Wars films themselves mix them. Leia is like an Age of Rebellion character, Han Solo is straight out of Edge of the Empire, and Obi-Wan Kenobi is a Jedi from Force of Destiny.

9 Use Starting Experience To Increase Characteristics

Characteristics in Star Wars Roleplaying Game are equivalent to D&D‘s ability scores. They define a character’s basic abilities. Alongside skills, they decide how many dice a player rolls for an action and what type. When first making a character, a player can use their experience points to increase Characteristics.

8 Don’t Be Intimidated By Talent Trees

The Star Wars RPG can look daunting to learn. Each Specialization comes with a tree of 20 talents. Only four of these are available at the start. The player accesses the rest of them by buying Talents. Most of these unlock other Talents, as indicated by the lines connecting them on the Specialization.

This can be intimidating to new players. However, it’s more intuitive than it looks. A player doesn’t need to try and get every Talent in their Specialization or make a detailed plan before the game begins. A player can start with one of their initial four, and just follow the lines from there to make an effective character.

7 A Character’s Career Is Important

It can be easy to overlook Career in the Star Wars RPG. Aside from some starting skills, it also determines a player’s choices for starting Specialization. As Career doesn’t give any Talents in its own right, players can think it’s less important than their choice of Specialization. However, a character’s Career is an important choice.

Career affects a lot of a character’s starting skills. Additional specializations within a character’s career are much cheaper to purchase than those from other Careers. On top of this, they limit what Signature Abilities player characters can get later in the game. They also affect a character’s place in the story. No matter how they evolve, a Smuggler will always be known as a Smuggler.

6 Combat Skills Are Useful, But Not Vital

However, not every character needs to be able to fight. It’s rare to get through a game without any violence. However, characters might prefer to specialize in other roles. A party needs hackers, pilots, and negotiators every bit as much as fighters. If a character can get a couple of points in Ranged (Light), it’s helpful. However, in most campaigns, it isn’t a requirement.

The Jedi are the most iconic part of Star Wars. They’re undeniably cool, and many players may want to try Jedi characters. Nonetheless, Fantasy Flight Games’ Star Wars RPG tries to balance them with non-Jedi characters.

Force powers all cost experience points to learn and improve. This delays a character’s progression in other areas. In addition, a character has to go through at least one Specialization before their Force powers are reliable. Jedi are fun and viable characters. Force and Destiny makes playing them thrilling. However, characters in other gamelines can stand alongside them perfectly fine.

The Star Wars RPG starts players off with a load of experience, determined by their Species. They can spend this to increase their Characteristics, or like normal experience points. They can purchase Skills, Talents, new Specializations, and more. However, players don’t have to spend all of this straight away.

Any experience points not spent in character creation will just be added to the experience a player earns in the game. If they want to purchase a Talent or Skill that they can’t afford with their starting experience, players should hold onto it.

3 Even Weak Armor Is Better Than Nothing

Star Wars RPG combat isn’t too lethal, but it is fast-paced. Characters can be knocked down in a couple of shots. Even the weakest armor can provide a bit of soak. This can mean the difference between a character going down straight away in combat and lasting long enough to patch themselves up.

A party in most RPGs needs to be able to tackle anything that comes its way. Many D&D parties will try to have a face, a healer, a frontline warrior, an arcane caster, and other roles. The same principle holds true in the Star Wars Roleplaying Game. In particular, players want to coordinate on the game’s many skills.

The Star Wars galaxy is full of all kinds of obstacles. Players might need to talk their way past guards, pick a lock, track down a criminal in the underworld, and shoot a target from a distance. Some overlap is perfectly fine between characters, but it helps to make sure that each character can solve some problems that others can’t.

The characters in Star Wars are capable and talented individuals. Many of them are trained and experienced Jedi Knights or career criminals. Even inexperienced characters like Luke Skywalker, Ahsoka Tano, or Rey start out able to fight, pilot, talk, and many more. Players shouldn’t expect this in the Star Wars RPG.

Player characters will start out with a number of skills, but they won’t be an expert in any of them. Players might have a fully-formed character concept in mind that they can’t reach with their starting equipment or experience points. However, this just gives them a goal to work towards. Player characters start out inexperienced, and the Star Wars Roleplaying Game lets them grow throughout the game.