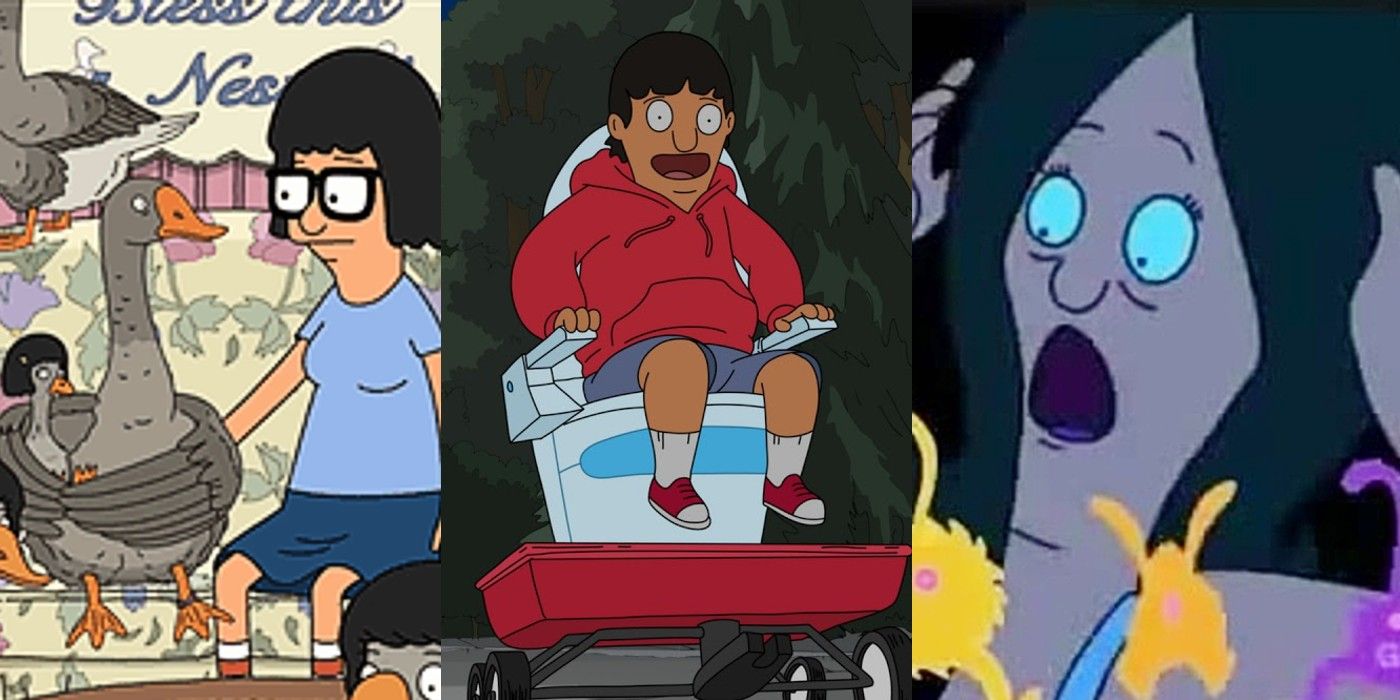 Sitcoms tend to be formulaic while following the occasional tone set by the characters. Bob’s Burgers tend to avert this by having extremely outlandish plots and schemes. This is what makes it such a lovable show, as audiences can always expect something different.

RELATED: 13 Animated Series That Are Clearly Inspired By The SimpsonsHowever, this does not work for everybody. A good majority of the characters in Bob’s Burgers are all silly oddballs to an extent. Which also means that they do some very weird things that can be very hard to watch or just be plain uncomfortable.

10 OT The Outside Toilet Is Gene’s Wildest Adventure

The episode title itself is a play-on ET, but the plot is even wackier than a boy and his alien. Instead, it’s about a boy and his talking toilet. Gene is considered the most immature of the Belchers due to his love of toilet humor and lack of common sense. So it makes some sense that he would happen to find a high-advanced toilet that can talk.

Gene takes it upon himself to look after the toilet and even rescues it from the thief who stole it from its rightful owners. It’s not everyday television shows feature a talking toilet, let alone have it parody a classic sci-fi movie.

Bob’s Burgers tends to include all kinds of wild schemes, especially if they are Louise’s. In Aquaticism, Louise decides to help Tina save an aquarium under the claim that it is a church. Of course the fake religion they come up with makes no sense, but that’s part of the episode’s hilarity.

With a little of quick thinking and a very gullible IRS agent, the Belchers almost get away with it. In real life, there is no way this would fly, hence why this episode is pretty bizarre even for Bob’s Burgers.

This episode is the 11th season premiere of Bob’s Burgers. After Bob falls asleep in his car trying to find Tina’s birth certificate, he somehow shrinks down to an ant-size. Humorously, his goal is to wander about the terrains of his dirty car to find the key to his lockbox.

RELATED: The 10 Longest Sitcoms, Ranked By SeasonsTo make things even stranger, his traveling companions are an old stress ball and cassette tape that talk. Bob’s quest is pretty cool to see, but it’s definitely one of the weirder episodes of Bob’s Burgers.

7 Hamburger Dinner Theater Takes Theater To The Most Bizarre Level

Bob’s Burgers’ first season is famously known for being its weirdest season. As the show was trying to find it’s footing, the humor was raunchier, and the characters were much more dysfunctional. And it’s shown in “Hamburger Dinner Theater” when Linda prioritizes her makeshift dinner theater over her own safety.

When a murder mystery play turns into an armed robbery, a bigger twist comes when the robber insists on being part of the play. A desperate Linda accepts his offer despite the risk of getting robbed yet again. Although Linda’s skewed priorities can be funny, it was more than a little bizarre for her to be so permissive with a robber.

The Belcher kids’ Aunt Gayle is almost infamously kooky but nonetheless lovable. She makes her debut in Season 1’s Art Crawl as their emotionally fragile and wacky aunt who loves art more than she is talented at it. With her paintings being rather gross images of animal orifices, it’s clear that she’s not all there.

RELATED: 10 Dumbest Bob’s Burgers CharactersIt doesn’t help that Bob decides to keep her paintings on his wall in a bizarre attempt to spite Edith Cranwinkle, the grouchy art store owner. It’s not Bob’s finest moment, especially since he spirals further out of control at the risk of his business.

5 Mutiny on the Windbreaker Is An Unusual Kidnapping Plot

“Mutiny On The Windbreaker” (Season 3, Episode 4)

Season 3 is where Bob’s Burgers really began to stand on its feet and brace its absurdity. Mutiny on the windbreaker stands out as the most absurd episode of the season. What begins as a cooking gig on a cruise ship ends up with Bob and his family being kidnapped.

Captain Flarty is almost cartoonishly mad as he puts Bob through hell when preventing his chance at escape. Cruise ship adventures are always eventful, but it only gets weirder with his family’s wacky antics that include Tina getting endless hair massages and Gene trying to romance a puppet.

4 An Indecent Thanksgiving Proposal Pays A Hallucinated Homage To Totoro

Thanksgiving is a staple holiday for Bob’s Burgers as Bob’s favorite holiday. As passionate as Bob is, he often takes it too far. Season 3’s first Thanksgiving themed episode is certainly one of the strangest holiday episodes, especially about the holiday itself.

Bob’s obsession with the holiday leads to him going on an absinthe bender. The audience get his wonderful Turkeytastic hallucinations that serve as a beautiful homage to My Neighbor Totoro. It’s one of the most bizarre moments of animation from the show, but very fondly remembered.

Another season 3 episode full of holiday hijinks. It’s not unusual for Christmas themed episodes to be chaotic, but God Rest Ye Merry Gentle-Mannequins takes it up a notch. Especially when Bob meets Chet, an eccentric man who believes he was once a mannequin who turned human. Despite this, Chet is helpful with mannequin displays even if his delusions are unsettling.

Humorously enough, this episode parodies the film Mannequin through Chet’s delusions, by also making it sound as bizarre as the movie does. Even the Belchers found themselves put off by his fantasies, but pitied him enough to give him their Christmas present money to him, which for all its quirks, was heartwarming.

Tina Belcher is a very relatable character that many feel they can identify with. From her love of fanfiction to numerous crushes, Tina’s a pretty great character. But she’s not immune to taking her quirks too far. Fans love her endearing awkwardness and imagination, but sometimes her fantasies can get too weird.

The most infamous example is perhaps her fantasized romance with Bruce, a goose from the park she befriended. After feeling spurned by Jimmy Jr, Tina spends time with an animal companion, to the point of writing fanfiction about herself and the goose in a romantic relationship. Needless to say, her siblings, parents and even some of her fans were disturbed.

Oddly enough, the weirdest episode of Bob’s Burgers as a whole just might be the pilot episode “Human Flesh”. Bob’s Burgers is a great show, but it had a pretty weird start. The first episode is all about a rumor that the restaurant uses human flesh in their food, which is quite a unique, if taboo, topic.

Although it wasn’t the strongest opening, it left a decent first impression on the audience as a unique if outlandish television show about a kooky family. Audiences can look back on it fondly as Bob’s Burgers awkward start to its current greatness. It’s certainly the weirdest pilot, but it’s looked at nostalgically by Bob’s Burgers fans as the show’s beginning.

NEXT: 10 Best Burger Of The Day Names In Bob’s Burgers