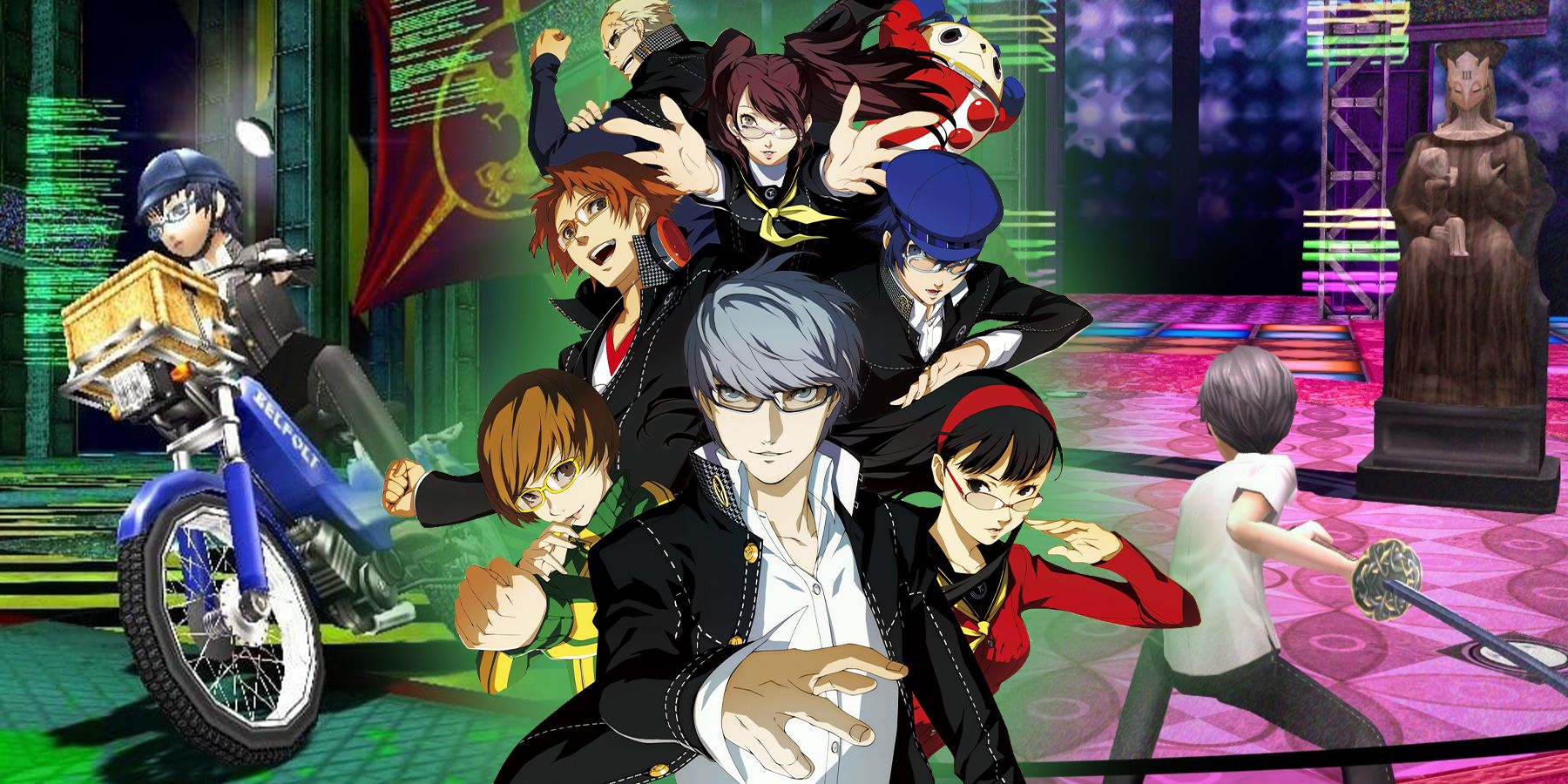 Persona 3 took the Persona series in a bold direction in its 2006 release by banking on players becoming engrossed in the day-to-day social micromanagement of its lead protagonist. This bet paid off, and P3 was met with a positive reception from players and critics alike. This success carried over into Persona 4 in 2008, which became a massive hit, spawning many spinoffs, including a fighting game and a rhythm dance game. Like P3, P4 would later receive an updated version in Persona 4 Golden.

Initially released for the PlayStation Vita in 2012, P4G escaped from Vita purgatory in 2020 with a PC release. Two years later, Atlus announced P4G will make its way to the Xbox Series X|S and the PlayStation 5, along with Persona 3 Portable and Persona 5 Royal. P4G makes a laundry list of changes and additions to the original P4. Some of them were so significant that it’s tough to imagine playing P4 without them.

Updated on January 22, 2023, by Michael Colwander:Persona 4 Goldenis now out on modern consoles. This version ofP4Gis nearly identical to the 2020 PC release, with a few minor quality-of-life improvements.

Language and localization options are important to any JRPG fan. On top of dual audio features, the latest ports of P4G include language options for French, Italian, German, Spanish, and Simplified Chinese. One caveat to this is that the protagonist’s name will default to “Yu Narukami” when switching languages.

The player-created name will be retained when the language changes are reversed. From the Steam version onward, players will also have subtitles during cutscenes, something that was missing from the Vita version and was made available in Persona 4: Dancing All Night.

Social Links and Confidants are the backbones of modern Persona games. Players can spend time with a wide range of characters both in their party and out of it. Each character has a deep and engaging story as they confront the problems in their lives. In some cases, this can lead to a romance between the protagonist and that character.

Normally, when a player sees a Social Link scene, they can’t view it again without starting a new playthrough. This was changed in the latest ports of P4G as the player can access an Album in the protagonist’s room where they can view Social Link scenes and select alternative options to see the various paths within a Social Link.

Additionally, P4G allows players to customize difficulty by adjusting specific areas, like how much money and experience is earned or how much damage an enemy inflicts. This was originally only available on New Game+ in the Vita version, but the PC version allows players to make these adjustments in their first playthrough. To make things more accessible to players, a quick save feature was also added to the 2023 ports.

P4’s battle system changed P4G. Most of the changes are through team-up attacks. For example, players can execute a Tag Team attack with two members and a Cavalry Attack, which involves a scooter-riding member of the Investigation Team that’s not in the current party.

RELATED: Which Persona 4 Golden Character Are You Based On Your MBTI®?

As for All-Out Attacks, Rise can now join in the fray, taking a break from her typical role as tactical support. Other changes include buffs and debuffs being able to stack for prolonged effects, and an expanded version of the Shuffle Time system, giving players more varied rewards after winning in battle.

8 Vox Populi And SOS Can Help In Times Of Need

Even though P4G does not have any multiplayer modes, that doesn’t mean it’s without online functionality. P4G includes two new online features on Vox Populi and SOS. Vox Populi serves as a way for players to know what other players did on that given day.

This makes managing schedules much easier by maintaining a similar pace of progress as other players. Finally, the SOS feature serves as a call for help in dungeons. Players can have the ability to send aid to other players in need, and receive it as well, in the form of restoration.

7 P4G Has Achievements For Players To Earn

P4G’s release on the PlayStation Vita marked the first time P4 received any form of trophies or achievements, which carried over into the PC release. The P4G achievement list is loaded with tasks that require players to cover every inch of P4G. For example, players must max every character’s Social Links in a single playthrough, max out each social trait, create every Persona, and reach the true ending.

Players will also need to hear 250 unique lines from Rise in battle. However, the only way to track Rise’s lines is by downloading a separate checklist and marking them throughout the playthrough, making the achievement extremely frustrating to earn. Sadly, this wasn’t changed for the latest ports of P4G.

Marie is a new character exclusive to P4G. An attendant to Igor and Margaret in the Velvet Room, Marie is a very reserved yet short-tempered girl who loves writing poetry. Marie knows little of who she is or why she’s in the Velvet Room in the first place.

Players can spend time with Marie to build her Social Link as she tries to learn more about who she is. By maxing out Marie’s Social Link, players will get to experience P4G’s true epilogue ending. To reach this, players must combat a special dungeon dubbed the Hollow Forest, and it’s not for the faint of heart.

4 Tohru Adachi Has A Social Link, Too

Marie isn’t the only new Social Link in P4G. Players can now build a Social Link with Tohru Adachi, who previously didn’t have a Social Link in P4. Adachi is a police detective who aids Ryotaro Dojima in investigating the mysterious and gruesome murders at the center of P4G’s story.

Adachi can be found at the Junes Department Store and the Central Shopping District at night. Players will only have a limited number of opportunities to build their Social Link with Adachi, so spending time with him should always be a priority.

3 The Additional Winter Months Allow For More Time In Inaba

Typically, the story of P4 ends in December. Afterward, time skips to the end of the school year for the ending. In P4G, the available time expands to February 14th. Players will first need to achieve at least a good ending. This winter section also includes arguably the best new music track, “Snowflakes,” which is sure to fill players with emotions as they approach the end of their time with P4G.

With the extra available time, players can further build their Social Links and be able to tackle Marie’s dungeon if those prerequisites are fulfilled. The winter months also include exclusive slice-of-life moments such as a hilarious skiing trip.

Not all new content in P4G is featured within the game’s story. In P4G, there’s a secondary mode called TV Listings. This is an additional gallery mode where players can access bonus content, including concert clips, story cutscenes, concept art, a music player, and more. Players can unlock TV Listings content as they play through P4G.

TV Listings also includes a minigame mode in the Midnight Channel Miracle Quiz, which serves as a P4 gameshow hosted by Teddie. Players must answer tough questions that test their knowledge of P4 against A.I. opponents.

1 P4G Features A Bad Ending And A New Epilogue

With new characters and story content, it would certainly be fitting for P4G to make additional changes to P4’s ending. As a result, P4G features a new bad ending and a new epilogue cutscene set months after the main story’s conclusion.

The bad ending requires players to discover the culprit behind the Inaba murders, but choose not to tell anyone. The player will then help the killer destroy evidence, ensuring the case is never solved. For the new epilogue, the player must reach the true ending and complete Marie’s dungeon. Once those requirements are fulfilled, players are treated to a fun epilogue allowing them to catch up with the Investigation Team.

NEXT: 10 Video Game Series Where The Most Popular Entry Isn’t The Original