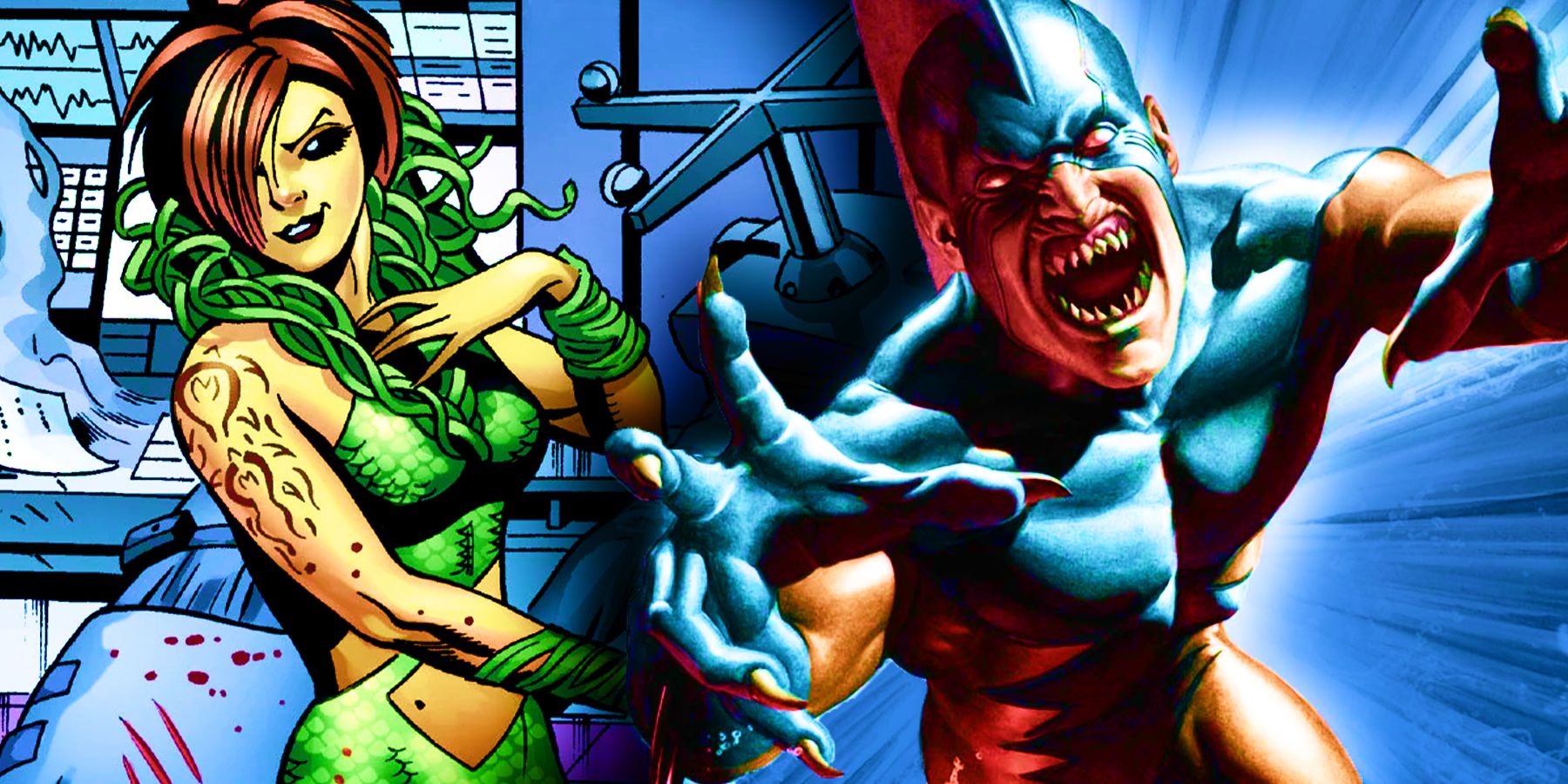 The Marvel Cinematic Universe continues to expand into new territories as the films and Disney+ series increase its roster of characters and visit new places within this world of magic, aliens, and mythical beings. One location fans had eagerly anticipated was the appearance of Atlantis.

The debut of Talokan, the MCU Marvel’s version of the underwater city, brought some long-awaited characters to the MCU and some comic book faces that fans weren’t necessarily expecting. With so many more aquatic characters waiting for their chance to seize the spotlight, Marvel Studios should hurry up and bring them to the MCU.

Updated on January 18th, 2022 by Mayra García: Phase Four’s last movie, Black Panther: Wakanda Forever, expanded on the MCU and introduced Talokan, a revamped version of Atlantis. This new realm opens the door for aquatic characters such as Namor, Namora, and Attuma. Fans don’t know yet if these characters will return to the MCU, but if Talokan becomes a staple in the Marvel films, other characters could debut too. This list has been updated with some options of water-based powered heroes and villains who could join the MCU.

15 Sedna Is A Deity Like Namor In The MCU

The daughter of Hodiak, the Inua Sky Father, and Earth Mother Gaea, Sedna is one of the Gods of North America. She’s also known as Arnakuagsak and Nerrivik, which are actual Inuit deities. Sedna possesses hydrokinesis and a siren call that allows her to lure people like a sire would. Besides, Sedna has prehensile hair that serves her in battle.

Namor’s backstory in the MCU involves the mutant being a deity for his people, K’uk’ulkan, with Talokan based on the Aztec Paradise. Given his similarity with Sedna, it wouldn’t be so strange for both deities to meet. Sedna could be yet another god from the Pantheons in the MCU missing from this universe so far.

14 Namora Was Namor’s Second-On-Command In The MCU

Black Panther: Wakanda Forever introduced Namora, portrayed by Mexican actor Mabel Cadena. In the movie, she’s one of Namor’s strongest warriors from Talokan and obviously someone he could trust. However, the film didn’t delve into their relationship like the comics do.

If Talokan were to appear again in the MCU, Cadena should definitely reprise her role. On one hand, there’s still plenty to say about Namora that Disney has neglected. Additionally, by the end of the film, it became obvious Namora had certain doubts about Namor’s strategy. They could have a fallout that could alter Talokan’s course.

Sometimes known as Leviathan, Marrina is a Plodex, an alien race that attempted to nest on Earth. After their ship exploded, only Marrina’s egg survived and it was found by Thomas Smallwood, a ship captain. The man took the egg home, where he and his wife raised Marrina as their own.

Marrina grew up like a normal human, but kept her amphibian nature. When she grew up, she later joined Alpha Flight. At some point, Marrina also dated and married Namor. Similarly, she could be Namor’s love interest in the MCU.

12 Stingray Could Be An Earth Ally For Namor

A former oceanographer, Stingray is one of the many C-list heroes in the Marvel Universe. With a memorable red and white suit, the character’s name comes from his powers. He can glide underwater using the wings on his suit and can even shoot bolts of electricity.

If the MCU is looking to round out its character roster with lesser-known heroes, making them friends or foes of Talokan would be a great way to do it. Stingray is a relatable surface hero who could become one of Namor’s most important allies on the silver screen.

11 Albakor & Cteno May Hint At The Inhumans

Albakor and Cteno are two members of the New Inhuman Elite who have water-based abilities. Both characters, whose names actually refer to fish, have a fishlike physiology that allows them to move and breathe underwater. They’re also close allies of Triton.

RELATED: 10 C-List Marvel Heroes Who Need To Be In The MCU

Albakor and Cteno are Marvel C-Listers at best, so it’s unlikely they will have a relevant role in the MCU. Regardless of this, since they are Inhumans, their appearance could make a stronger nod towards the Inhumans’ presence and role in the MCU. If they were to appear next in Talokan at some point, hardcore Marvel fans would love it.

10 The Sea Isn’t Complete Without Poseidon

The MCU already has renowned gods like Zeus and Hercules in its ranks, which can only mean that the other Olympians are close behind. Since Thor and the Norse gods have already made such an enormous impact on the universe, this simply makes sense. Adding other Greek demigods, heroes and deities could completely shift this universe further.

When it comes to the ocean, Poseidon is an obvious choice to bring in. Atlantis won’t ever appear in the MCU, but Poseidon could easily be a member of Talokan or even from a different underwater civilization. Only time will tell if they would go to war against the Talokanil or ally with them.

The daughter of Namora, Namorita is a mutant with a very similar power set to Namor, like amphibious physiology, superhuman abilities, and flight. Like her mother, she is one of Namor’s closest allies in the comics, but she has also played several important roles in other events.

Since Namora is already in the MCU, it wouldn’t be difficult to introduce Namorita. She could be a teenager or a child, but her existence would set precedent for future events, much like America Chavez and Toussaint already have.

8 Lady Dorma Could Add Depth To Any Namor’s Story

Sometimes referred to as Lady Dorma, the cousin to Namor himself has actually had several roles thanks to constant rewrites, such as Namor’s childhood friend and confidant. The character has also been Namor’s wife and lover, considered his equal in every aspect.

So far, the MCU has delved very little into Namor’s present life. However, if Talokan were to re-appear in this universe, Namor would surely need a family. Lady Dorma is the perfect character to expand on Talokan’s history. Even her dramatic end — sadly killed by one of Namor’s foes while trying to save him once last time — would bring a tragic stoicism to the Prince.

7 Dancing Water Could Be A Minion

Created by Rick Remender and John Cassaday for Uncanny Avengers, Dancing Water is made of pure water, which she can reshape however she wants, even modifying her density. This villain, who worked as one of Red Skull’s minions, can also control bodies of water close to her.

Dancing Water died in Magneto’s hands in the comics. Given this, she doesn’t have enough backstory to be the main villain in a future MCU project. However, she could definitely act as a second-in-command for any other villain who tries to destroy Talokan.

The Defenders of the Deep are a team of creatures put together by Namor to protect the underwater realms. They’re basically the Avengers of the sea. Given this, it could be a fun and quirky group for the MCU to feature, even if it’s in a small capacity.

Members include the memorable Tiger Shark, King Crab, Bloodtide, Echnida, Andromeda, and the group of deadly creatures known as the Piranhas. This ragtag group of strange, water-based creatures could look incredible on screen with the proper CGI work. Their presence in a film would make for some epic stuff.

Njord is a powerful member of the Asgardian realm, specifically, one of the deities that rules and watches over the seas. Contrary to other Asgardians, like Thor, Odin, or Hela, this water lord hasn’t appeared in the MCU but could be key to connecting Asgard and Talokan.

As the homes of two important heroes and gods, Namor and Thor, Talokan and Asgard indeed will have a lot in common. This could either pit them against each other or turn them into allies. Regardless, Njord, the son of a frost giant, could help mediate between both realms.

4 Hydro-Man Could Be A Namor Foe

Morris “Morrie” Bench is one of the most dangerous members of Spider-Man’s rogues’ gallery. He’s a former ship crewman who gained the ability to transform into pure water. Thanks to this ability, he can enter any location he wishes. Additionally, Morris can manipulate bigger bodies of water by merging with them, even transforming them into tsunamis.

During Spider-Man: Far From Home, Mysterio created a Hydro-Man-like figure in the battle against Spider-Man, but the real one is yet to appear in the MCU. Since Bench gained his abilities after falling into an experimental generator in the sea during a battle between Spider-Man and Namor, it would make sense for him to resent the mutant. He could be a villain in his next film. It would be interesting to see what Namor can do against Hydro-Man tidal waves.

Supposedly destined to invade Atlantis and conquer the kingdom, Attuma is one of the most notable underwater villains that Marvel has produced. With a strong disdain for humanity, Attuma has also caused a lot of trouble above the surface of the seven seas. What makes him worse is that he is actually more enhanced than other Atlanteans before him.

In the MCU, Attuma appeared as Namor’s ally. However, Black Panther: Wakanda Forever strongly hinted at Attuma’s disloyalty. On one hand, this character seems to be even more violent than Namor, but he also doesn’t fully trust Namor’s leadership. Talokan could be in danger if Attuma is still around in future MCU projects.

2 Triton Could Breath On The Surface With The Talokanil Masks

A member of the Inhuman Royal Family, Triton is the brother of Kamak and the cousin of Black Bolt and Medusa. He’s a half-man, half-fish, with a skin full of scales, a dorsal fin, and fins. He can’t breathe air, so he could take advantage of Talokanil technology.

Triton has actually been seen in the MCU before. A member of the Inhumans, the television version of the characters left a lot to be desired and could get a reboot. If the MCU brings the character back, it could be together with Namor, Attuma, and other aquatic characters. After all, his abilities make him perfectly adapted to the ocean.

Portrayed by Tenoch Mejía-Huerta, Namor finally debuted in the MCU as the antagonist in Black Panther: Wakanda Forever. The political and spiritual leader of Talokan, he mutated thanks to a Vibranium root his mother took while pregnant. His people’s genocide in the colonizers’ hands made him resentful of the surface nations, like Wakanda.

Given his backstory, it was tough not to empathize with Namor during the film. Wakanda Forever is a story about mourning and the Sub-Mariner also deals with this. It makes sense that fans fell in love with him immediately. If Talokan reappears in the MCU without Namor leading it, the fandom would be very disappointed.