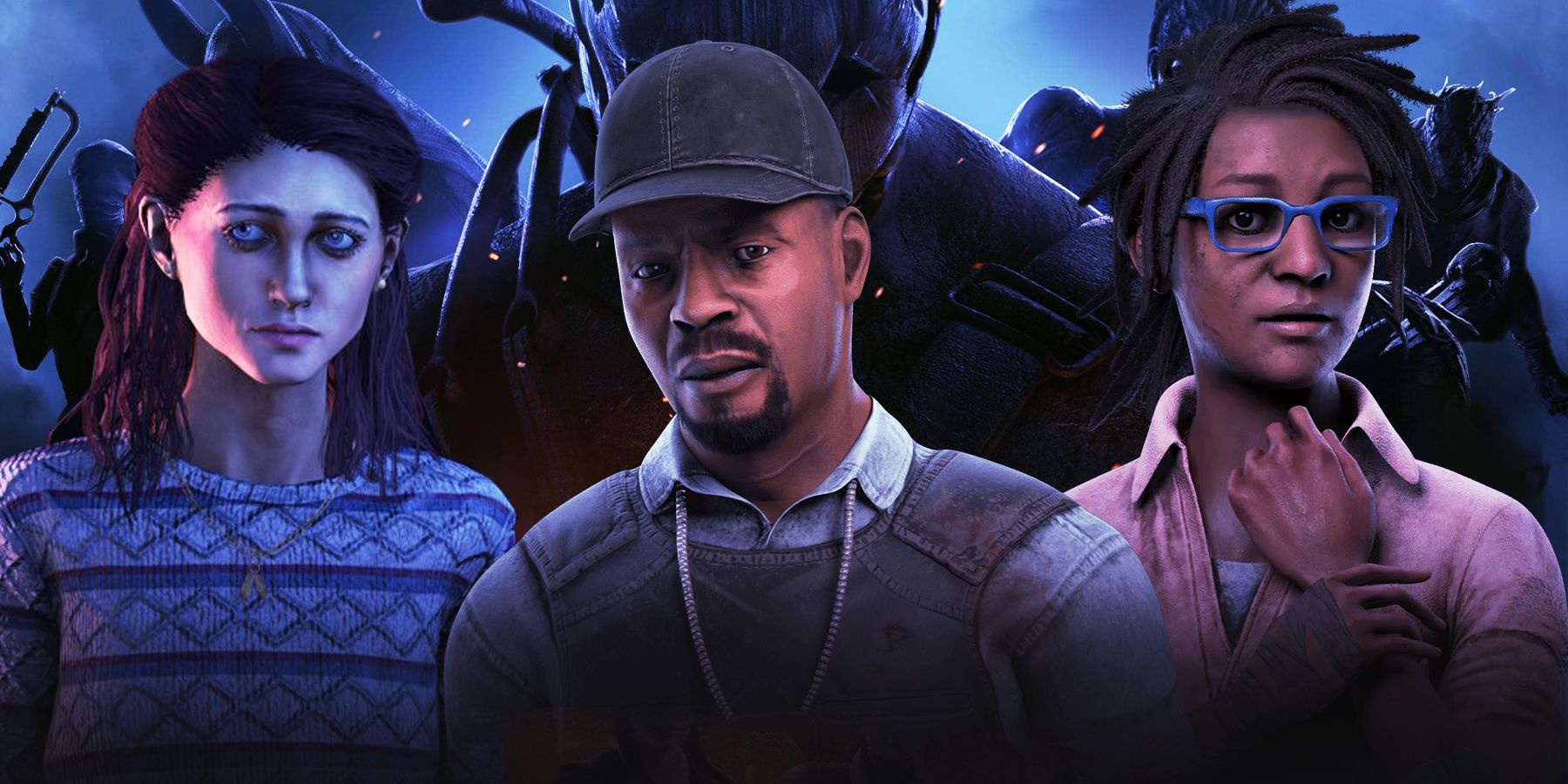 Dead by Daylight is a fun survival-horror game with online multiplayer that allows matches of four Survivors against one Killer. Killers have the upper hand against the relatively defenseless Survivors, so it’s best for Survivors to work together and outsmart the Killer. Each Survivor has a set number of Perks that truly make the characters what they are, especially for those that are homages to other popular media, such as Steve Harrington from Stranger Things.

Updated January 25th, 2023, by Brittanie Maldonado: Time has gone by, and the pool of Dead by Daylight characters has continued to grow. With that comes new Perks and new metas. This list has been updated with a few more Survivors who stand out from the pack. We’ve also added details about each Survivor’s Perks, making it easier for players to make a choice at a glance.

15 Steve Harrington Is Best As A Support Member

Steve shines in his ability to help other Survivors make it through the trial, so it’s probably best to put off leveling him until later. The Babysitter Perk is especially useful, as it allows other Survivors to avoid leaving any traces of themselves after successfully being unhooked. The Camaraderie Perk is good if Steve needs to unhook himself, but other Survivors can handle it for him.

Second Wind speeds up the healing process, but there are Survivors with better healing Perks. With the departure of Stranger Things from DBD, Steve’s original unique perks have been retired and replaced with the General Survivor Perks Guardian for Babysitter, Kinship for Camaraderie, and Renewal for Second Wind. Any Survivor can access these Perks without having Steve.

Hailing from the Saw franchise, Detective David Tapp has some pretty useful Perks for surviving Dead by Daylight. The Tenacity Perk allows him to distract a Killer and also has the added bonus of letting him crawl to safety faster while recovering health at the same time.

The Detective’s Hunch Perk is great for revealing the auras of generators, chests, and totems on the map. If David is holding a map after completing a generator, the generator auras will appear on the map for other Survivors, which makes this a pretty useful Perk.

13 Nancy Wheeler Works As Both A Team & Solo Survivor

Each of Nancy’s Perks works well to help her see what’s happening on the map and allow her to help her teammates. The Inner Strength Perk is probably her best and allows her to heal one health state when hiding inside a locker after cleansing a totem. The Fixated Perk lets Nancy see her own scratch marks on the floor and speeds up her walking speed by 10 to 20%.

Finally, the Better Together Perk reveals the aura of the generator she’s working on to all the nearby Survivors. Since Stranger Things has been removed from DBD, Nancy’s unique Perks have been upgraded to the General Survivor Perks Situational Awareness for Better Together, Self-Aware for Fixated, and Inner Healing for Inner Strength.

Jake Park is an excellent character to play for stealth since his Perks are geared toward keeping quiet. The Iron Will Perk reduces Jake’s grunts of pain by up to 75%. The Calm Spirit Perk reduces the chances of alerting crows, screaming for any reason, or making noise when interacting with Chests or Totems, which can all alert Killers to a Survivor’s position.

The Saboteur Perk allows Jake to sabotage hooks without the need for a toolbox. Additionally, he can see the aura of the hook when in a certain radius. If timed correctly, Jake can destroy a hook before the Killer can hook a Survivor.

11 Nea Karlsson Is About Stealth & Conservation

Nea is a perfect stealthy Survivor. With the Urban Evasion Perk, she has increased movement speed whenever she is in the crouching position. She also has Balanced Landing, which may be one of her best Perks when combined with another, such as Urban Evasion.

Urban Evasion almost acts like a sprint burst if the player jumps out a window or falls down a hole. It reduces the noises Nea makes when landing and significantly drops the staggering time. She also runs at 150% speed upon landing for three seconds but becomes Exhausted right after.

10 Dwight Fairfield Is A Great Survivor For Team Players

Dwight Fairfield has some great perks that allow him to help his teammates in several ways. With the Leader Perk, he increases the speed of nearly every action his fellow Survivors take as long as they’re within close range.

With the Prove Thyself Perk, Dwight can increase his teammates’ repair speed so that they can complete generators quicker. With the Bond Perk, Dwight can see the auras of his allies when they are within a specified range. His abilities allow him to monitor what others are doing so he can help them if needed.

9 David King’s Perks Allow Him To Support His Teammates

David King’s We’re Gonna Live Forever is a great Perk to have for supportive players. This Perk makes healing a Survivor out of the Dying State 100% faster. The Perk also allows players to stack up Tokens by performing various actions, which can be used to give Survivors the Endurance effect after being healed from the Dying State.

David King also has the Perk Dead Hard, which was once considered his best Perk and the best Exhaustion Perk in the game but has since been reworked. Now, Dead Hard activates the Endurance status effect, allowing players to avoid Killer damage for a brief moment if timed correctly.

Felix Richter’s Visionary Perk will allow him to locate generators within a certain radius, making it easier to repair them. The Desperate Measures Perk is most useful for other Survivors because it increases the speed of their healing and unhooking while Felix is close by.

Finally, Felix Richter’s Built To Last Perk will refill a depleted item gauge up to 50%. Overall, Felix’s Perks are great for utility purposes, and each of them helps ensure that the other Survivors can complete their tasks more efficiently.

War veteran, William “Bill” Overbeck, is known for his role in Left 4 Dead, and he’s got some pretty impressive Perks. The Perk Left Behind is particularly amazing since it allows Bill to see the aura of a hatch when he is the last Survivor in a game. Bill also has the Borrowed Time Perk, which benefits the Survivors Bill saves from hooks.

Survivors unhooked by players running Borrowed Time will receive additional time to their Endurance and Haste status effects. Finally, the Unbreakable Perk allows Bill to fully recover from his Dying state, increasing the speed at which he recovers and allowing him to stand up completely without help.

Laurie Strode is from the Halloween franchise and comes with some amazing Perks that perfectly fit her character in the Halloween films. Her best Perk is Decisive Strike, which allows her to avoid Killers tunneling or camping her. If Laurie is captured within 40/50/60 seconds after being unhooked, the player gets a difficult skill check.

If successful, the Killer will be stunned and drop Laurie, allowing her to escape. She also has the Object of Obsession and Sole Survivor Perks, which increase her chance of becoming the Killer’s obsession, allowing her to be the bait while her teammates finish up the generators.

One of several Survivors now available from the Resident Evil series, Leon Kennedy can be highly disruptive to a Killer’s plans. His perk Rookie Spirit allows him to track any regressing generators, while Bite the Bullet will make himself and anyone healing utterly silent, even if they fail a check.

Leon’s most useful perk is the aptly named Flashbang, allowing him the unique ability to craft flash grenades by hiding in a locker. Once made, they can be thrown to blind and deafen a nearby Killer, or to create an alert on their screen, mimicking a generator explosion or similar.

The Alert Perk allows Feng Min to see the Killer’s aura whenever they break a pallet or damage a generator for three to five seconds. This gives Feng Min an upper hand on the Killer’s location for the entire game. She also has the Technician Perk, which reduces the sounds made when repairing a generator, making it harder for the Killer to locate her.

It also helps to reduce the likelihood that the generator will explode if Feng Min fails a skill check. Finally, she has the Lithe Perk, which allows Feng Min to gain a 150% sprint burst for three seconds after performing a rushed vault.

Meg is the stealthiest of Survivors, making her Perks a priority for newcomers. With the Quick & Quiet Perk, she doesn’t make as much noise when jumping into lockers or vaulting over windows and pallets, making it easier for her to run away and hide in a timely manner.

The Adrenaline Perk is also immensely powerful, as it allows Meg to heal an entire health state and runs faster once the Exit Gates have been activated, ignoring the Exhausted status. She also comes with the Perk Sprint Burst, which allows Meg to quickly run away from the Killer when activated.

Claudette is a great solo Survivor with the utility to support her team. She is a healer and has the Perk Self-Care, which allows her to heal herself without the need for a Med-Kit. The Perk Botany Knowledge allows Claudette to have increased healing speed when healing her teammates at the cost of Med-Kit efficiency.

Empathy is Claudette’s best Perk, and it works wonderfully when combined with a healing Perk. This Perk allows Claudette to see the aura of her injured or dying teammates so she may run to heal them before the Killer can get them.

1 Mikaela Reid Can Support Her Team & Scout The Map

A storyteller with a mystic inclination, Mikaela’s perks allow her to support a team in ways no other Survivor can. Upon cleansing a Totem, she can activate Clairvoyance, seeing all features of the map within a large distance, including the often elusive Hatch should she be the last one standing.

Mikaela’s other two perks are likewise potent, taking Totems found throughout the map and using them to aid nearby Survivors. Circle of Healing allows anyone to heal themselves and speeds up the process, while Shadow Step hides all scratch marks and auras within its range from the Killer’s view.

NEXT: What Video Game You Should Play Based On Your Halloween Costume