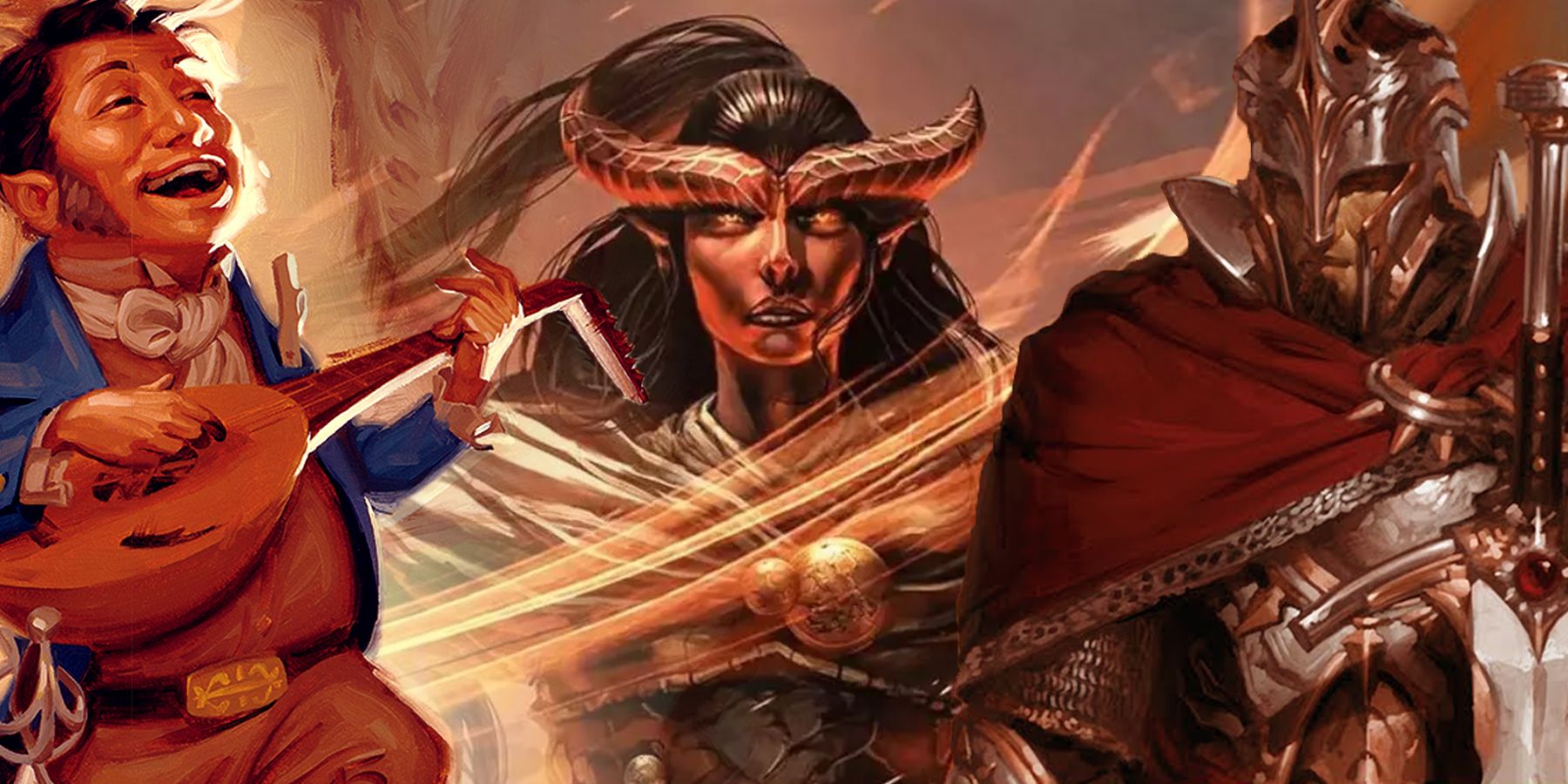 Dungeons & Dragons has been a large part of nerd culture for decades. It has had many editions, iterations, and evolutions. Throughout these evolutions, D&D has come to develop its own tropes and archetypes. Players have gravitated to certain character types and stories and have inspired other groups to do the same.

As D&D aged, its tropes remained constant. From common character archetypes to cliché plot points, many aspects crop up again and again in D&D campaigns across the years. Yet, some tropes are beloved, and many character archetypes are tried and true. From the brooding warlocks to the sneaky rogue, there are many iconic D&D archetypes.

Updated 16th of January by Isaac Williams: Originality isn’t a requirement in D&D. Some players might want to make unique characters, whereas others might prefer well-trod ground. This list has been updated with even more classic and archetypal D&D characters, with entries that cover mechanics, roleplaying, and more.

15 The Chaotic Neutral Rogue Who Steals From Everyone

Chaotic neutral is one of the nine D&D alignments and is a fan favorite. It allows players to make bad choices for fun but without making them seem evil or antagonistic to the party. Furthermore, chaotic modalities are a perfect option for campaigns with more comedy, goofiness, or loose rules. Thus, it can be one of the most fun alignments, especially for the thieving rogue.

One of the most cliche ways to play a rogue is as a Chaotic Neutral character with no real morals. It lets a player use Expertise in skills like Stealth and Sleight of Hand to rob people of everything they’ve got. Most groups will draw a line at robbing other player characters. However, most NPCs are fair game to such a rogue.

14 The Everyman Human Fighter Is A Staple

Humans have developed a reputation as the straightforward species in Dungeons & Dragons. In Fifth Edition, they have practical bonuses to their ability scores and none of the more flavorful abilities of other species. Some players go further and combine them with the most straightforward class, the fighter.

The human fighter is seen as the baseline character for Dungeons & Dragons. The archetype persists for several reasons. A human fighter is an easy way for a new player to get to grips with the game. Some players also prefer to play a mechanically simpler character. Others even enjoy its milquetoast reputation. They can play their own character without any premade species cliches in mind.

D&D has no shortage of stereotypically “edgy” classes and character archetypes. The game has a lot of darker and more gothic character options. Chief among these is the warlock. In D&D Fifth Edition, all but one type of warlock gets their abilities from a pact with some dark otherworldly creature.

Warlocks are tortured souls whose pacts are often tied to traumatic or dark histories. Furthermore, warlocks taking these pacts might want to conceal their otherworldly connections due to their dark nature. Regardless of the reason, the brooding warlock is a D&D staple.

12 The Wizard Who Doesn’t Care About Good And Evil

D&D parties tend to be heroic, but that doesn’t mean every member needs to be. As long as a player has a reason for their character to stay with the group, they can play any sort of morality. This lets players portray evil characters. However, some take a different tack and go for an amoral or extremely neutral character.

In particular, wizards are a popular choice. A wizard is the perfect choice to arrogantly care about things other than good and evil. Wizards might instead adventure to find knowledge, master different types of magic, or further a higher cause. This archetype goes back to D&D‘s earliest days. The D&D wizard Mordenkainen is an early Gary Gygax wizard who cares only about maintaining balance in the multiverse.

Monks are D&D 5e‘s unarmed combat and martial arts class. They’re heavily inspired by wuxia archetypes and storytelling. Monk subclasses allow for a range of character builds and fictional storytelling. However, by far one of the most popular is the Way of the Drunken Master.

RELATED: How To Build An OP Barbarian/Monk In D&D

This archetype has become iconic thanks to the many fun situations it can facilitate. For example, players can get a lot of joy from revealing their stumbling, unassuming character to be a powerful fighter. As long as it’s handled well, it can open up a lot of storytelling options.

Paladins were originally required to be lawful good. Their earliest incarnations followed good gods and received their powers from them. Paladins have become more flexible in recent editions. In 5e, paladins get their power from an Oath. Some of these are still moral, such as the Oath of Devotion or the Oath of Ancients. Others, like the Oath of Conquest, are darker.

Despite these new developments in the paladin rules, players still can’t get enough of the lawful good paladin. For the most part, this sort of character can help the party stay out of trouble and on the right side of the law. However, if they’re a stubbornly lawful character in a more flexible party, they may end up being disruptive in their own right.

Unlike paladins, clerics get their powers from their deity rather than from a vow in 5e. Clerics’ abilities rely on the character’s faith rather than their deeds. Clerics have always been less at risk from the lawful good cliche. Nonetheless, almost all of them are religious in some sort of way. It’s very easy to play a zealot, whether deliberately or accidentally.

One iconic but infamous archetype is the cleric who wants to convert NPCs or even other PCs. They might push their agendas through kind and generous means or take a more violent approach. Regardless, this character archetype is notorious for a reason, but it makes for a thematic villain.

Gnomes are well-suited to playing wizards. They get bonuses to Intelligence and Constitution by default, both of which are vital for wizards. Gnomes are also unconventional warriors and gravitate towards spellcasting. However, the gnome is best associated with one specific type of wizard: the School of Illusion.

This association goes back to early D&D editions. Gnomes got unique access to the illusionist, a variant of the wizard. It’s stuck even with gnomes losing exclusive bonuses to illusion magic. Illusion magic suits gnomes’ prankster-esque personalities while still being able to help in combat.

Aragorn, or Strider, is one of the most popular Lord of the Rings characters. He’s instrumental in Frodo Baggins’ story and also leads a story of his own. Aragorn also codifies a lot of early ranger tropes. He’s a wilderness man with the ability to fight and to heal others. These all contribute hugely to the ranger class fantasy.

Due to Lord of the Rings‘ popularity, and its influence on D&D, Aragorn is a common drawing point. Many players focus less on his status as heir to the throne and leader of the West’s armies, and more on his portrayal in Fellowship of the Ring and The Two Towers. It’s an easy way to make a successful ranger.

Lord of the Rings was one of the biggest inspirations for D&D and the modern fantasy genre. As a result, there are many character archetypes to draw from the series. Besides the Aragorn-style ranger, there is also the Legolas-modeled archer. This could be a fighter with an Archery fighting style or another ranger.

Elves are one of D&D‘s most straightforward and common species. They combine useful abilities and stats with an excellent aesthetic. Legolas is the single most iconic elf in fantasy fiction. Even if players don’t set out to recreate him exactly, it’s easy to use some of his tropes in roleplaying.

It makes sense to dump Intelligence when building a barbarian. Strength and Constitution are the most important stats for the class, and Dexterity and Wisdom are important to all. However, some players take a problematic and sometimes ableist approach to role-playing these characters.

The witless barbarian has become an iconic character archetype. However, it can feel like punching down. There are plenty of ways to play characters who don’t have a high Intelligence modifier without making it an inappropriate joke. Furthermore, this phenomenon seems almost exclusive to barbarians. When PCs of other classes have a low Intelligence score, they’re just played as not “book smart” or educated in academic topics.

D&D is full of warlocks who embrace their powers and the patrons that give them. However, there’s another equally common type. There are plenty of warlocks who want to betray their patron and leave their pact. Their patron can be particularly vicious, or the pact can compromise them in a moral sense.

A warlock attempting to trick, overcome, or even kill their patron is a common D&D storyline. It lets a warlock make a pact with a very dark master without having to be evil. It also lends itself naturally to high-level play. Most patrons are very powerful creatures, well above the average party.

The artificer is one of D&D‘s more unusual classes In 5e, it’s the only whole class that has been added since the game’s very beginning. Unlike most other characters, artificers focus on using technology alongside magic. They build devices, upgrade allies’ equipment, and even cast their spells using tools.

There’s less inspiration for artificers in fiction than most other classes. One of the more common sources is Tony Stark, Iron Man himself. This is especially true for the Armorer Artificer Specialist, which is clearly themed after him. Even without using a magical suit of armor, artificers can draw on Stark’s attitude or genius as roleplaying points.

The flirtatious bard who wants to seduce everything has become such an iconic character trope that it still produces memes. These characters are infamous for trying to charm dragons with their eloquence or hitting on every NPC that enters a five-foot radius. Since the bard is one of D&D’s most difficult classes, it’s best not to choose this class solely based on gimmicks.

While these bards are common, they aren’t always a bad thing. They bring levity to otherwise heavy games. However, they do require sensitivity from the player making them. They have to be aware of the group’s boundaries and avoid crossing any lines. Done right, however, and it can be one of the game’s more amusing archetypes.

“Murderhobo” is a pejorative way to refer to an infamous D&D player archetype. These characters kill indiscriminately and try to fight everything rather than find a creative solution. They focus on getting their way and killing anything that annoys them. This is often at odds with other player characters and the story at hand.

Pure murderhobo behavior is likely to get a player removed from a table. However, some players keep trying it. Sometimes it can be toned down. Characters can be antisocial or violent without being completely incapable of focusing on the story the table wants to tell.

NEXT: Every D&D Class, Ranked By Combat Ability