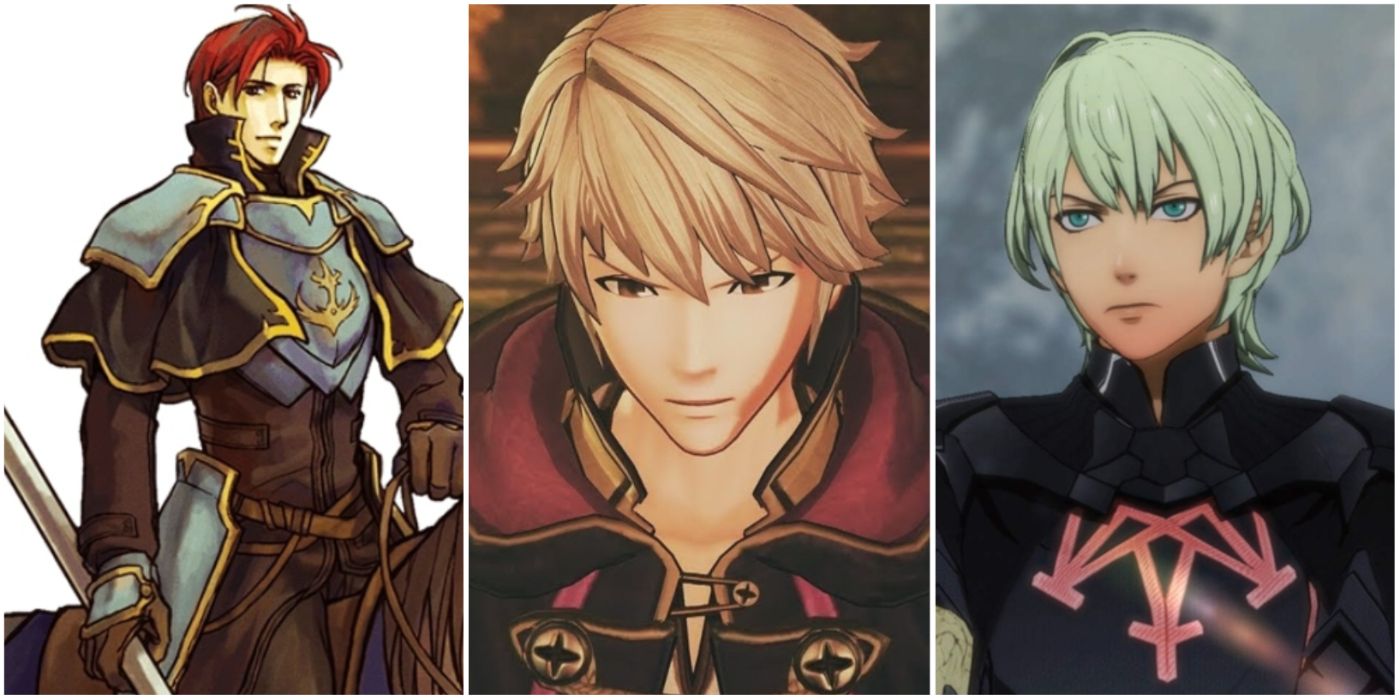 Fire Emblem has had hundreds of units across its sixteen games, with all manner of weapons, abilities, uses, and statistics. The games don’t approach anything like a flat power level, as individual games feature characters who are far more powerful or far less useful than their fellows.

Comparing units across the entire franchise can be a challenge because the characters and games have changed a great deal. Nonetheless, there are characters who are considered to be so overwhelmingly powerful in their games that, when compared to other units in the Fire Emblem franchise, they clearly stand out as the most powerful and useful.

Lords are often Fire Emblem‘s best characters. They’re present in every chapter, have plenty of opportunities to level up, and usually get powerful unique weapons. Marth shows the power of Lords early on in Fire Emblem: Shadow Dragon and the Blade of Light.

Swords are very powerful in Shadow Dragon and Marth will be one of their best wielders. His offensive stats can be slightly low, but that is offset by his great defenses and unique weapons. He also has a unique tactical niche because enemies will go out of their way to attack Marth. When he’s strong, a player can use him as bait to enable a number of strategies.

14 Louis Is Far And Away The Best Armor Knight

Armor Knights are often an underwhelming Fire Emblem class. They suffer from low speed, which can hamper them on both offense and defense. In addition, their low movement slows down the entire game. Louis in Fire Emblem Engage is notable for being an overwhelmingly powerful Armor Knight.

Movement speeds on the whole are lower in Engage, so Armor Knights seem faster by comparison. In addition, Louis goes above and beyond Armor Knights’ regular stats. He’s almost invulnerable to all damage. When built with the right Emblem Rings, Louis can also devastate his foes when counter-attacking.

13 Athos Is A Deliberate Hail Mary

A semi-frequent trope used in Fire Emblem is the ‘Gotoh’ character archetype. This a very powerful unit given for free at the end of the game that the player can use to patch any holes that may have formed in their roster. Fire Emblem: The Blazing Blade boasts one of the best-known Gotohs in the franchise, Athos.

Athos is one of the Eight Legends who first drove the dragons from Elibe. He returns centuries later to fight the dragon who serves as the game’s final boss. Although some of his stats are shaky, Athos has full mastery of all magic in Fire Emblem:The Blazing Blade. This gives him unparalleled versatility. With a simple buff to his speed, he can kill the game’s final boss in a single round.

Caeda appears in the very first Fire Emblem game, Shadow Dragon and the Blade of Light. She’s one of the first truly powerful units in the franchise. Caeda holds a special place in the hearts of fans for her functionality in the game. Caeda’s main function is to kill bosses, and it is something she does perfectly.

Shadow Dragon‘s map design lets Caeda reach many bosses immediately. She’s able to either warpskip or simply fly over. When she reaches them, she makes short work of it. She boasts high stats, especially speed. Furthermore, her unique weapon, the Wing Spear, destroys mounted and armored foes. Most of the game’s bosses fall into these categories. None of them can challenge Caeda.

Thieves aren’t often powerful in Fire Emblem. They boast mediocre offensive stats and low health. However, they are very good at dodging attacks. Yunaka in Fire Emblem: Engage takes this to another level. She has incredibly high Speed and good dodge chance. This can be combined with an Emblem Ring like Marth’s to ensure almost no attacks can hit her.

Yunaka can face off against an entire army and survive just by dodging. In addition, daggers are very good weapons in Fire Emblem Engage. Yunaka can deal a huge amount of damage to enemies while tanking everything the enemy throws at her. Yunaka is possibly Fire Emblem Engage‘s least balanced unit.

10 Azura Shows The Power Of Support

A subtly powerful class in the Fire Emblem series is the Dancer. Dancers are less combat-capable than many. However, they can use their abilities to give units another turn. This is immensely powerful, effectively doubling the usefulness of a player’s best unit. Dancers often come with heavy limitations. They’re often fragile, weak in combat, or have limited availability.

Azura lacks these weaknesses in Fire Emblem Fates. She is frailer than many characters in the game. However, it’s easy to make her tougher through the game’s character-building. She can become reasonably good at combat, particularly with her Sky Knight class. On top of that, she is available from near the start of the game in every route.

9 Marcus Is One Of Fire Emblem’s Best Jagens

The ‘Jagen’ archetype is one of Fire Emblem‘s best-known. Jagens begin the game far more powerful than other units. They’re designed to protect weaker characters until they can become more powerful. A Jagen typically drops off later in the game. Marcus from Blazing Blade, however, doesn’t really do the second part.

Marcus’s base states are high enough that his growths don’t even need to be the best in the series. With only a few average level-ups, he can remain one of Blazing Blade‘s most powerful units throughout. He needs much less training than any of the game’s other powerful units.

8 Haar Has Everything Going For Him

Fire Emblem: Radiant Dawn is noted for having some of the least balanced units in the franchise. Due to the game’s unconventional design, Radiant Dawn has many units that are flat-out better than their counterparts. It also boasts some characters who are overpowered by design.

Haar stands out even in Radiant Dawn‘s powerful roster. He has excellent bases, impressive growths, the game’s best weapons, and flight. He has a weakness to Thunder magic, but almost no enemies use it. Haar is considered one of Radiant Dawn‘s top-tier units. On top of that, he’s one of its few powerful units available for most of the game.

In most of these games, Palla is considered ludicrously powerful. She joins very early on with very high base stats and can often be promoted immediately. She is considered to break the power level of most of those games, particularly both versions of Mystery of the Emblem. Few characters can break as many Fire Emblem games as Palla.

The Laguz Monarchs are late-game allies in Fire Emblem: Radiant Dawn. They’re incredibly powerful, both in the lore and in gameplay. They boast high mobility, incredible stats, and the ability to remain in their powerful Laguz forms for an entire battle. Tibarn, on balance, stands above the other Monarchs.

Tibarn is the most mobile character in the game, bar none. There is not a single enemy in Radiant Dawn that he can’t attack twice in combat. He has incredible defensive stats and a considerable chance of ignoring any damage he takes. He also does impressive damage. If an enemy’s in range of Tibarn, they’re dead.

5 Byleth Is Even More Powerful Than Her Three Lords

‘Avatar’ units in recent Fire Emblem games are notorious for their power level. They boast high growths and unparalleled versatility. Byleth from Three Houses isn’t Fire Emblem‘s most infamous Avatar. Nonetheless, they are noted for being that game’s most powerful unit. This is despite being in a game full of other very strong characters.

RELATED: 10 RPGs Everyone Should Play At Least Once

In particular, Byleth is more powerful than the three main Lords of their game: Dimitri, Edelgard, and Claude. All three are already considered some of the most powerful Lords in the entire franchise. Byleth still eclipses all three with their versatility and their potential.

4 Seth Can Solo His Entire Game

Pre-promoted Paladin units have a habit of falling into the ‘Jagen’ archetype. As such, many lose relevance in the later game. However, there is a secondary archetype called the ‘Oifey’. These are pre-promoted Paladins who lack the low growths of the Jagens. They’re able to develop more along the lines of regular characters.

The most notorious Oifey in the franchise is Seth, the second character the player gets in The Sacred Stones. Seth is available from the beginning of the game. He starts as his game’s most powerful unit and can remain that way. His power is so high that clearing the game with only him isn’t considered much of a challenge.

3 Sigurd Is The Franchise’s Most Powerful Lord

Sigurd, the main character of the first half of Genealogy of the Holy War, is one of Fire Emblem‘s most infamously powerful units. Between his starting bases, skills, equipment, and growths, Sigurd is capable of defeating every enemy he might come across. He never loses the slightest jot of relevance.

Sigurd is another character who can quite comfortably solo his entire section of the game. Doing so is considered only slightly harder than using the army that the player has access to. His impact is limited by his story-mandated death. Nonetheless, in the chapters where he serves as the protagonist, nothing can stand in his way.

2 Morgan Can Do More Than Almost Any Character

Fire Emblem: Awakening combines two powerful mechanics. It has an Avatar, often considered the most powerful unit in the series. In addition, it has a second generation of units. This second generation is almost always more powerful than their parents. These mechanics combine in Morgan, the Avatar’s child.

Morgan gets unparalleled versatility from one parent, and any number of powerful skills from the other. They’re different in every game, but always incredibly powerful. A boy Morgan is also the only male character in Fire Emblem: Awakening who can get the Galeforce skill. On top of that, giving Morgan Manakete powers is considered one of the most broken things in the game.

1 Robin Is The Most Broken Unit In An Unbalanced Game

Avatar units are considered on the upper scale of power. Robin from Fire Emblem: Awakening skews that average considerably. Awakening is a game noted for numerous problems with its balancing and power level. Few of these are as pervasive throughout the game as Robin’s power.

Having Robin solo Awakening is considered easier than a number of other ways to play the game. Awakening has incredibly flexible character-building, the ability to XP grind, and a pair-up system to further boost characters. Robin can use these along with their high stats and unparalleled versatility to dominate the entire game.