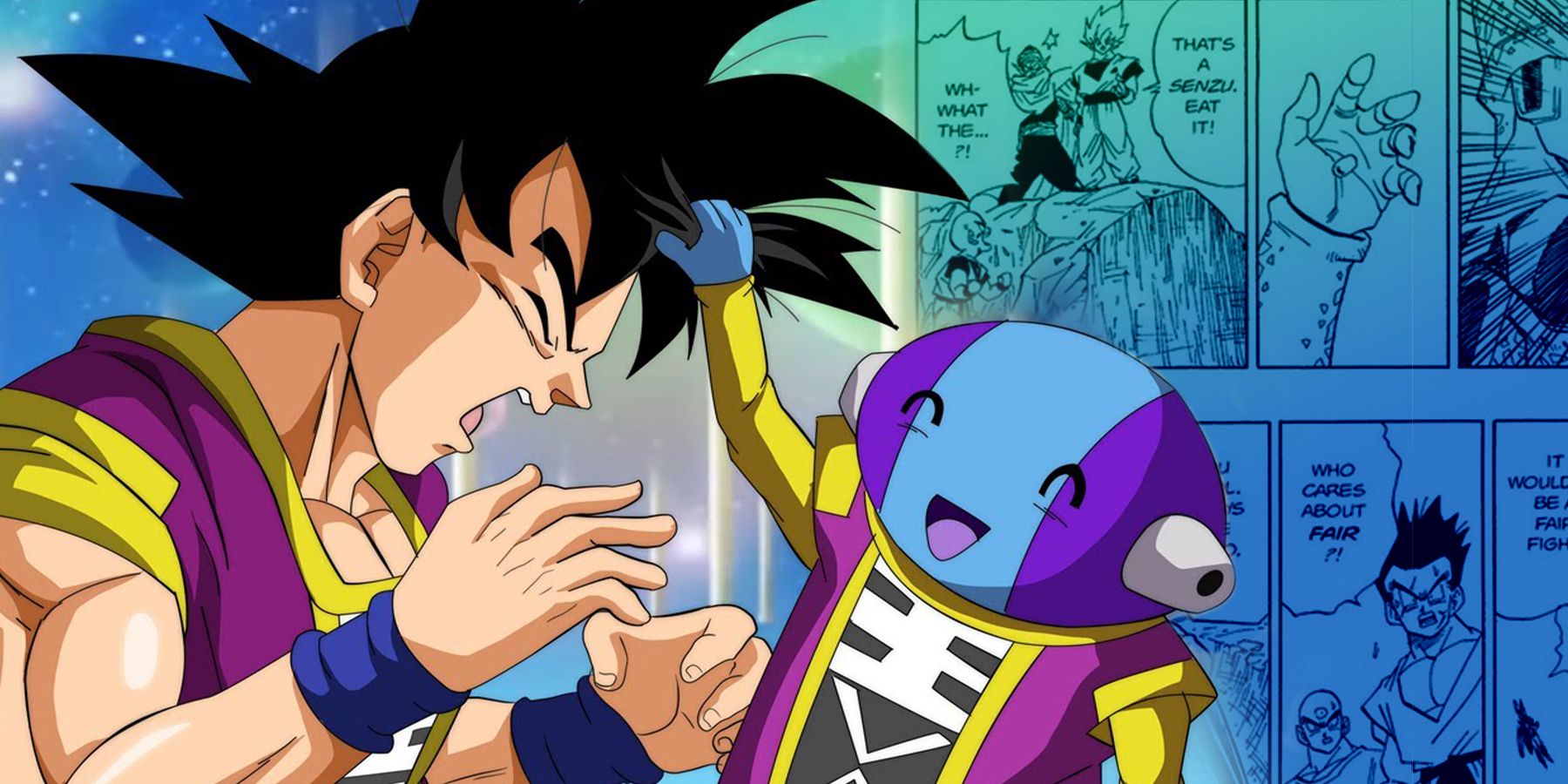 Akira Toriyama’s Dragon Ball is one of the most iconic anime series of all time and it’s helped establish the template for many popular shonen series that have followed in its wake. There’s a substantial amount of growth throughout Dragon Ball since its inception and the series chronicles young Goku’s growth into an adult who begins a family that also fights to protect their planet.

Dragon Ball hasn’t been afraid to experiment with change and push the series to bold new places, yet Goku is a constant throughout the franchise. Goku continues to grow stronger and accomplish greater feats, but he’s not always the most helpful person. Goku’s emotions and instincts sometimes get the better of him and it’s led to some pacifistic gestures that have spawned major consequences.

Updated January 18, 2023 by Daniel Kurland: One of the biggest reasons that Akira Toriyama’s Dragon Ball has managed to endure for as long as it has is because Goku is such a lovable protagonist and moral center for audiences. Goku’s strength is in the upper echelon of shonen heroes, but Dragon Ball makes sure that the character contains multitudes and that he’s not just a burly set of muscles and colorful transformations. A major component of Goku’s personality is that he’s humble, innocent, and selfless–sometimes even to a fault. Goku does his best to be fair and rational in any situation, but there are certain scenarios where his passivity and kindness go too far.

15 He Accepts His Lot In His Childhood Body

Dragon Ball GT remains a controversial sequel series in the franchise, but it deserves credit for some of the more ambitious risks that it takes. One of the most jarring changes that occur early on in Dragon Ball GT is that a misguided wish from Pilaf accidentally transforms Goku back into his childhood body.

Goku’s strength is slightly encumbered, but he never seems too frustrated over this development. Most characters would make it their priority to rectify this problem or at the least properly punish Pilaf. Goku is rather nonplused over this dramatic turn of events and stays like this for the entirety of Dragon Ball GT.

Fusion has become a double-edged sword for Dragon Ball and the anime occasionally abuses this concept to get out of particularly dangerous scenarios. The Potara Earring fusion is introduced as a permanent process and so it’s no light gesture when Goku offers to undergo this process first with Gohan, but ultimately with Vegeta.

Fortunately for the Saiyans, Vegito’s fusion does conveniently separate. Goku is too much of a pushover to agree to permanently lose his individuality and put his family’s happiness at risk for the sake of a battle advantage.

The battle against Kid Buu is the final challenge for Goku and the rest of Earth to overcome in Dragon Ball Z. Kid Buu is an ancient evil who has taken countless lives throughout his existence. Endless evil surrounds this entity, and yet Goku still passively wishes that he’d return as a good person that he can fight against.

King Yemma hears Goku’s selfless request and reincarnates Kid Buu into the pure-hearted Uub. Uub turns into an ally, but it’s still quite risky to have someone with this level of strength on the planet.

12 Gohan Takes The Lead During The Tournament Of Power

The Tournament of Power is a multiversal competition where universal erasure is at stake. Goku and the rest of Universe 7 have never been under greater stress to do their best on the battlefield and to assemble the perfect team. Goku recruits Universe 7’s teammates, but he chooses to appoint his son Gohan as team leader.

Gohan’s team leader status is meant to be a healthy confidence boost that helps the lapsed martial artist get back in the groove. It’s sweet, but now is not the right time for Goku to play favorites or let his emotions get the better of him. There are better leaders in Universe 7.

The titular Dragon Balls are supposed to be sacred treasures and an individual would be extremely lucky to just get one wish from Shenron within their lifetime. Goku understands the scarcity of this privilege and he still chooses to selflessly give away wishes to others, whether it’s for simple needs or the resurrection of loved ones.

Goku could arguably use these wishes to grow stronger or better protect the planet. However, he’d rather give them to others and do good with them while he works towards his own achievements.

It becomes common practice for Goku to offer his enemies a chance at redemption, but one of the most critical examples of this is during his first grueling battle against Vegeta. This fight is an excellent example of teamwork where Goku, Gohan, Krillin, and even Yajirobe all work together to take down Vegeta.

Krillin is about to finish the job before Goku commands him to show mercy and let Vegeta escape. Granted, this is one of the rare occasions where Goku’s empathy does pay off in the long run and Vegeta turns into an ally.

Goku’s family with Chi-Chi in Dragon Ball Z is one of his most interesting aspects. He and his wife turn into such different people with contrasting opinions on what to do with their children. Goku wants Gohan to pursue fighting, while Chi-Chi wants him to become a scholar.

Gohan does fight, but Chi-Chi also gets her way and Gohan’s training suffers as a result. Chi-Chi’s instincts aren’t wrong, but Goku could be more adamant about what he wants for his son. He should be firmer on the issue rather than avoiding it because he’s afraid of conflict with his wife.

8 Raditz’s Pleas For Mercy Get The Best Of Goku

Dragon Ball establishes that Goku looks for the best in his opponents. Often, this kindness feels out of place, but if there ever was a person for whom mercy is appropriate then it’d be Goku’s evil brother, Raditz. Dragon Ball Z kicks off with Raditz’s arrival and Goku briefly gains the upper hand on his brother when he grabs a hold of his tail.

However, Raditz’s pleas for forgiveness get through to Goku. Of course, it’s all a ruse and he uses this opportunity to turn the tables. This mistake costs Goku his life.

7 Dr. Gero Has The Time To Build His Androids Thanks To Goku’s Inaction

The Cell Saga features Future Trunks’ arrival in Goku’s timeline with the power of hindsight. He tips the heroes off about Dr. Gero’s plans with the Androids and the inevitable invasion of Cell. After the group receives this information, Bulma makes the reasonable suggestion to take care of the problem before it has a chance to blossom and preemptively destroy Gero’s lab.

Goku disagrees and says that he’d rather train and get the chance to fight this mysterious threat and experience it. His excitement clouds his judgment and stops him from being proactive and responsible.

It’s remarkable how much the desire for competition legitimately blinds Goku from sound judgment. One of Goku’s most questionable acts involves the advantage that he offers Cell during the Cell Games. Goku is eager to see Gohan take Cell down at full strength and so he gives him a Senzu Bean to completely heal.

It’s not just a reckless and merciful act, but it’s one that costs Goku and other individuals their lives. Gohan grows stronger as a result, but it’s in very poor taste to allow Cell another chance when it’s unclear if he can even honor the gesture in kind.

5 Goku Decides To Not Be Revived & Stays Away From Earth

It’s not easy to be the planet’s strongest person, and Goku begins to understand that this privilege is also a burden that puts a giant target on not just his back, but all of Earth. Goku makes a shocking decision following the events of the Cell Saga when he tells his friends and family to not use a Dragon Ball wish on his revival.

Goku had pure intentions, but it later gets invalidated when he does return to Earth. It’s a weak decision that even feels slightly out of character considering how much Goku relishes a challenge.

4 Goku Holds Back His True Strength To Investigate Buu

Dragon Ball Z’s Buu Saga initially attempts to do something different and sidelines Goku until he inevitably returns, takes over the show, and saves the day. Goku observes a lot of Buu’s damage and it’s a major surprise when he casually unveils his Super Saiyan 3 transformation as a new and risky strategy to defeat Buu.

RELATED: 9 Ways Dragon Ball Got Worse Since The First Episode

Goku could have utilized Super Saiyan 3 much earlier, but he bides his time here to watch and learn, which leads to Majin Vegeta’s self-destruction. If Goku were more aggressive during his return then he could have saved lives.

Goku has faced a lot of determined villains, but few are as stubborn as Frieza. Goku’s initial battle against Frieza triggers his iconic Super Saiyan transformation, but the villain returns to threaten his life. It takes a noble fighter to give his opponent a second chance, especially when the planet that they’re fighting on is minutes from destruction.

Goku exhibits a softness for Frieza, even during these dire times, but Frieza uses this second chance to launch a failed attack at Goku. Goku manages to escape, but his empathy here feels like it creates an even greater resentment within Frieza.

2 Zeno Faces No Pushback From Goku

Granted, opposing Zeno is something that most people wouldn’t dream of and individuals have been erased for less. However, Goku finds a strange friendship with Zeno.

Goku is arguably the only individual that could safely talk Zeno out of holding the Tournament of Power, but he intentionally holds back because he’s excited over the prospects that the tournament provides and the new fighters that he’ll get to meet. It’s incredibly irresponsible and it even contributes to why Goku and Universe 7 become early targets in the Tournament of Power.

One of the most frustrating cases of Goku’s empathy getting the better of him in his final showdown against Dragon Ball Super’s latest enemy, Moro. Moro commits extreme acts of destruction and genocide on the scale of Frieza, yet Goku still offers him several chances at redemption.

This culminates in Goku also giving Moro a Senzu Bean and actively healing him in addition to the moral support that he gives him. It’s all for naught, and Goku should understand that certain individuals are beyond redemption.

NEXT: Dragon Ball: All Of Goku’s Transformations (& How He Got Them)