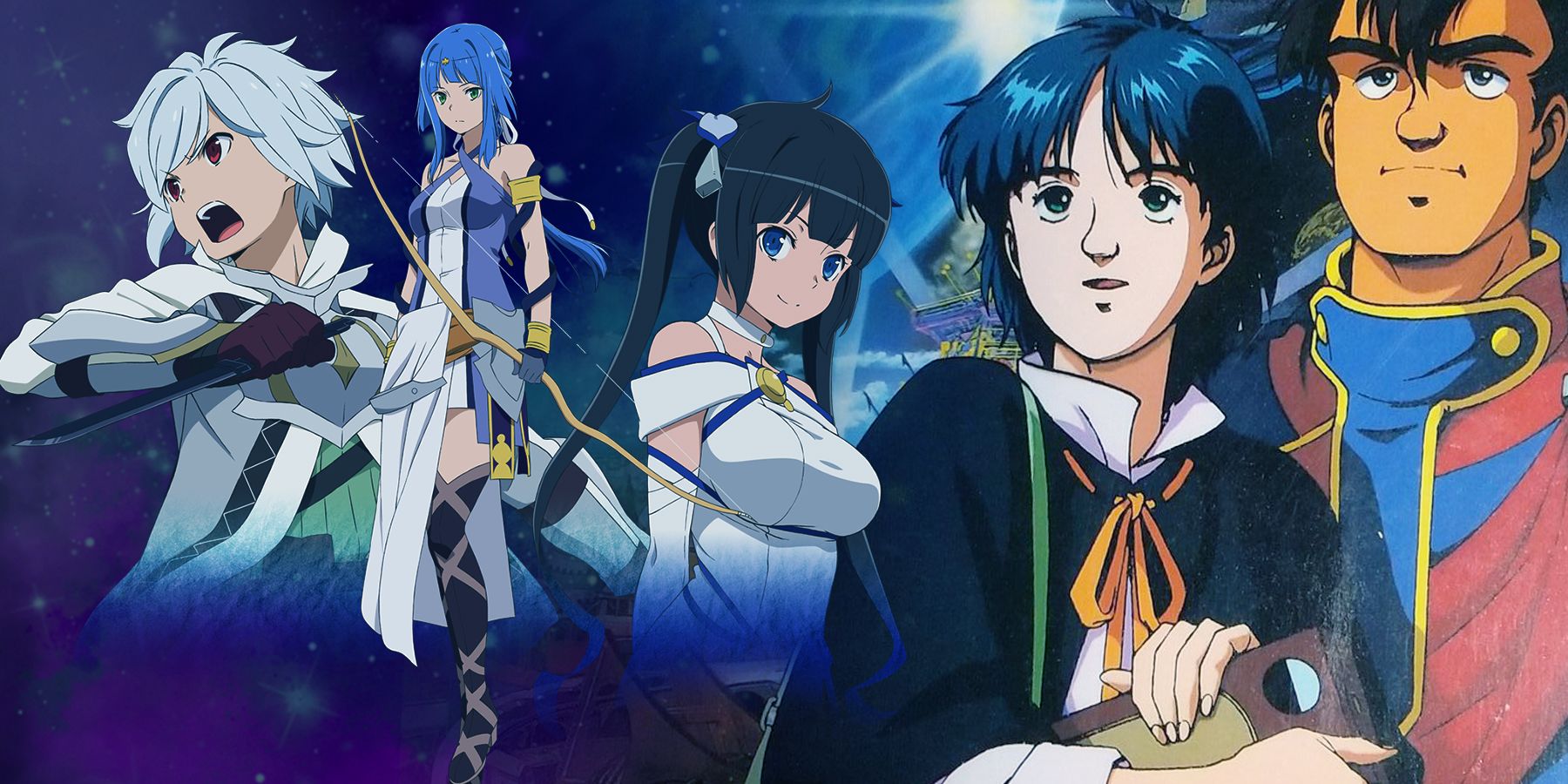 Anime films aren’t discussed nearly as often as anime television series, though they often have even better animation and stories. Part of that comes down to how well-known anime series are, while part of it comes down to television being an ever-present part of everyone’s lives. Some people might not even realize the places they can go to discover some amazing anime films.

While Crunchyroll is normally the place people go for everything anime, HIDIVE is also an incredible place to go. Featuring everything from newer series to anime classics, HIDIVE has a wide selection of films for anime fans to check out.

Updated by Sage Ashford, January 17th 2023: HIDIVE is a smaller company, but they’ve still got a sizable library of anime films to choose from. Though it might grow slowly, it still means there’s a few more new films for fans who are looking for theatrical-style stories. We’ve added some of the more important ones available to watch.

Seitokai Yakuindomo is a comedy about a student named Tsuda Takatoshi who’s been forced to go to an all-girls school that’s recently gone co-ed. Though he just wants to live a normal high school life, Tsuda finds himself joining the all-female student council.

Though Tsuda has ideas of what an all-girls school would be like, none of it matched up with his initial thoughts. Instead, he finds himself subject to misunderstandings the likes of which wouldn’t be out of place in Three’s Company. Though the movie is more of the same but with a larger budget, that shouldn’t stop potential fans.

The Initial D television series ran for several seasons and even a few OVAs, meaning the film adaptation needed more than a few movies to cover everything. Initial D Legend 2: Racer picks up where the previous film left off. After Takumi has proven his skills, new rivals appear. In Racer, Takumi has to deal with Keisuke Takahashi and his high-performance Mazda RX7.

Though Takumi doesn’t seem to care to respond to the challenge, his friend gets him pulled into yet another street race. Legend 2 sees Takumi get pulled deeper into the appeal of street racing, while offering drastically improved race scenes.

13 Majestic Prince: Genetic Awakening Lets Other Characters Take The Forefront For A Time

While it may not have the best reputation, Majestic Prince was one of the last great original mecha series released last decade. The TV series focused on humanity’s desperate battle against the alien Wulgaru. Though humanity was forced to rely on the Evolved Children, they were successfully able to push back the Wulgaru.

However, with Majestic Prince protagonist Izuru Hitachi out of action, the powerful Team Rabbits turn to their neurotic second-in-command to survive the next wave of attacks. Genetic Awakening offers a more intense version of the main series, with a much higher budget thanks to its theatrical release.

The original Tamako Market series was a comedy with slice-of-life elements, focused on a clumsy girl named Tamako Kitashirakawa. The series focused on her daily adventures going to school, helping at her family’s mochi shop, and hanging out with her friends.

Tamako Love Story turns that on its head, opting for a more serious romance story. For much of Tamako Market, Tamako’s best friend Mochizo has a crush on her he can’t bring himself to tell her about. As Mochizo prepares to go to university though, he realizes he’s quickly running out of chances to tell Tamako how he really feels. It’s a beautiful romance film that makes Tamako Market even more important.

Princess Principal was one of the more popular anime when it was released in 2017, thanks to how well-animated it was and how seriously it took its core concept. Several years later, a series of films were released as a sequel, starting with the first one, Princess Principal: Crown Handler.

In this one-hour adventure, the girls have collected together to go on a mission to retrieve an antique bookstore owner. Before the team can finish this easy mission though, they’re also asked to look into a double agent operating in the royal family. Though only an hour long, Princess Principal: Crown Handler sets up plenty of the tension people are looking for from a spy thriller.

Sometimes a franchise has been around long enough to get a remake, but for whatever reason they can’t quite pull one off. Despite Initial D being a legendary seinen anime series, the show has yet to get a sequel or much of a remake. Instead, in 2014, studios Sanzigen and LIDENFILMS introduced the New Initial D series.

9 Is It Wrong To Try To Pick Up Girls In A Dungeon: Arrow of the Orion Introduces A New Lady To Join Bell’s Crew

While DanMachi is a fantasy anime with amazing lore, the storylines are generally not all that surprising. Bell goes on an adventure, meets a new girl, gets stronger, and wins the heart of said girl. The woman in question may or may not join Bell’s group. In this instance, Bell accepts Hermes’ challenge to pull a spear from a crystal boulder and win a trip around the world.

During the story though, as expected, Bell meets a new woman. This lady, Artemis, is a part of Hestia’s past, making the story connect just as much to her as everyone else. Whether people like the story or not is likely going to depend on how much they already enjoy the existing DanMachi series.

Armored Trooper VOTOMS is one of the lesser-known mecha franchises in the West, but it has a thirty-plus-year pedigree. Full of gritty combat and political intrigue, it’s a must-see for mecha fans. Origin of Ambition takes place before the main series begins, giving viewers a chance to experience the world without having to know all the rules.

RELATED: The Best Anime Series To Watch On HIDIVE

Shortly after joining the military, Chirico lands on Planet Odon believing the army plans to test their abilities. Unfortunately, the “test” winds up being a battle to the death, leaving Chirico forced to show how strong his desire to survive can be. Though not strictly necessary, Origin of Ambition is a great film to test drive the VOTOMS universe.

7 Revue Starlight: The Movie Shows The Next Step For The Girls Of The 99th Class

Revue Starlight is a must-see for fans of magical girl series, and the movie isn’t any different. After the girls of the 99th Graduating Class of Seishou Academy manage to stand on the stage together and perform, there’s nothing left for the girls but to move on.

However, moving on isn’t always easy for everyone. Karen Aijou, the star of the original series, had only one goal: to perform with the person she cared most in the world for. Having done that, she lacks a purpose of her own once again. Revue Starlight: The Movie works as a perfect epilogue for both Karen and the rest of the girls from the main series.

The Fate/Kaleid Liner Prisma Illya series is supposed to be the light-hearted spin-off of the Fate franchise. There, Illya was allowed to grow up with love and support, eventually being chosen to become a magical girl. As the series developed though, fans learned this universe could be dark just like the Fate series.

In The Nameless Girl, viewers get more of Miyu’s story. In her parallel timeline, she lives in a world falling apart, where only the power of the Grail can save it. Unfortunately, the Grail’s usage requires Miyu to give up her life. With that in mind, her brother Shirou steps in to protect her. Fans of Miyu’s universe or the character herself can spend a bit more time in that world with this second film.

5 Royal Space Force: The Wings of Honneamise Follows Two Characters In Love With The Idea Of Space Exploration

Amidst all the big Hayao Miyazaki films of the ’80s and ’90s, The Wings of Honneamise is an incredible movie that has largely gone ignored. It was one of Gainax’s earliest projects before it gained fame as a major television company. The protagonists are Shiro Lhadatt and Riquinni Nonderaiko, two people who are passionate about the idea of traveling into space.

Despite Shiro being a member of his country’s “Royal Space Force,” he’s actually never been to space. However, his time with Riquinni convinces him to take an experimental ship out into space. The Wings of Honneamise has a beautiful aesthetic and is a film influential to multiple creators of the era.

4 Fate/Kaleid Liner Prisma Illya: Vow in The Snow Brings Back A Familiar Protagonist

It can be hard for people who’ve adapted to the normal Fate universe to try out something as tonally dissonant as Prisma Illya. However, the series’ first movie, Vow in the Snow, might help with that. In this timeline, Shirou Emiya has decided to do whatever it takes to defend his younger sister, Miyu Satsuki.

If that doesn’t sound familiar, it’s because this is still the world of Prisma Illya, but in the alternate timeline and history of Miyu before she came to Illyasviel’s world. In Miyu’s homeworld, the Fifth Holy Grail War has put Miyu at risk, and it’s only Shirou’s Archer Card that can save either of them. It’s an intense movie that’s worth trying if people want an easier way into this universe.

From Studio GRIZZLY, Twittering Birds Never Fly – The Clouds Gather is the first part of a film adaptation of a popular boys’ love manga. The storyline focuses on Yashiro, who leads a powerful yakuza group. Though Yashiro has kept all of his relationships physical for some time, things start to change when he meets Doumeki.

Doumeki is Yashiro’s latest bodyguard, and though both of them are dealing with their own traumas, they still find themselves drawn to one another. While the film is definitely aimed at a specific audience, it’s still a quality production and people appreciative of yaoi and BL stories will find plenty to love here.

In the old world, the different races abuse their power in pursuit of gaining dominion over one another. Their powers nearly wipe out humanity, though there’s one human leader who aims to put a stop to all the conflict.

Space Brothers #0 is a prequel film to the main anime series that was released a few months after the main television series. Taking place four years ahead of the series, it sees the brothers before they’ve renewed their vow to travel into space. Hibito is still just a rookie astronaut, long before he’s qualified for his trip to the moon.

Meanwhile, Mutta has almost given up on his desire to reach space one day and is still years off from getting his invitation to join JAXA. Still, the journey is about to begin as Hibito gets chosen to go on a NASA mission.