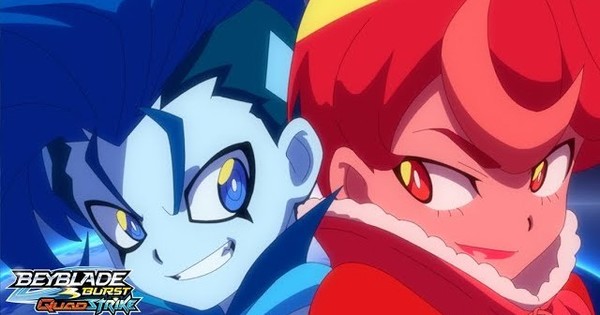 Anime will premiere this spring

The anime will premiere this spring.

The stage is set for a masquerade tournament, but the Dark Prince isn’t the only belle at this ball! Enter: the masked Blader known as ‘Quadra.’ Wielding her elemental Bey, Lightning Pandora, Quadra has defeated every foe to come her way. Meanwhile, Quadra’s brother, Pax, is busy studying the elemental powers radiating from a series of mysterious ruins nearby. Bel might be the Dark Prince, but this adventure is full of even darker secrets!

The Beyblade Burst QuadDrive (Beyblade Burst Dynamite Battle in Japan) anime premiered in Japan in April 2021. The show began airing on DisneyXD and DisneyNOW in December 2021.

The Beyblade Burst Rise (Beyblade Burst GT) anime debuted in Japan in April 2019 with the title Beyblade Burst GT on the Coro Coro Comics YouTube channel and on the Takara Tomy Channel streaming service. The English dub of the anime premiered on Disney XD in the United States in February 2020.

Beyblade Burst Sparking (or Beyblade Burst Super King) premiered on the CoroCoro Channel and the Takara Tomy Channel (both on YouTube) in April 2020. The show began airing on Disney XD on February 2021.