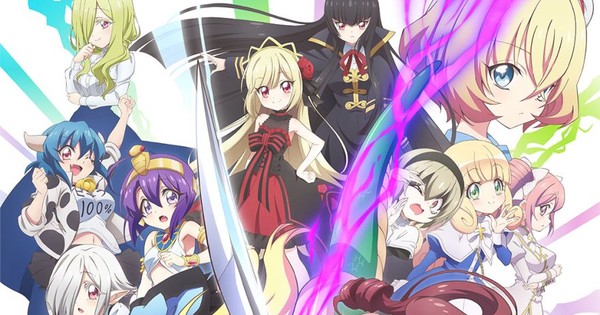 The official Twitter account for the Dropkick on My Devil! (Jashin-chan Dropkick) television anime announced on Friday that the anime’s crowdfunding project has raised over 100 million yen (about US$782,000). The campaign ended on Friday, raising a total of 115,964,266 yen (about US$907,000). The account had previously revealed that if the campaign were to raise over 96,560,858 yen (about US$756,000), then the staff would apply for the Guinness World Record for most money raised by an anime production project. The amount refers to the Dies irae anime, which raised 96,560,858 yen through a crowdfunding campaign in 2015.

Other non-anime animation projects have raised more money through crowdfunding campaigns, including The Legend of Vox Machina by voice actor-led Dungeons and Dragons group Critical Role with about US$11.3 million and The Wingfeather Saga Season 2 with about US$1.7 million,

The project met its initial 30 million yen goal (about US$235,000) within 35 minutes from the crowdfunding campaign’s launch on November 30.

The overall goal of the franchise is to crowdfund enough episodes to make an entire fourth season titled Dropkick on My Devil! NEXT (Jashin-chan Dropkick NEXT). The staff explained that to make a one-cours (quarter of a year) anime, the production cost is about 300 million yen (about US$2.153 million). The staff explained that they do not have “the power to raise that kind of capital,” and so the first goal was to launch a crowdfunding campaign for a new OVA episode. The goal was 30 million yen to produce one episode. The crowdfunding campaign is addding one more episode for every additional 30 million yen raised, with plans on screening the episodes at events and streaming the episodes. A “Jashin-chan Festival” event is planned for May 4, 2023.

If the campaign (or campaigns) manages to raise enough money to produce 12 episodes, the episodes will be compiled and will be broadcast as a fourth season of the overall anime.

Dropkick on My Devil! X, the third season of the anime, premiered on July 5. Crunchyroll streamed the series as it aired.

The third season of the anime also had a successful crowdfunding campaign that launched in September 2020 and ended in December 2020. 2,880 backers raised 36,181,238 yen (about US$351,100) for that campaign. A campaign backer pledged 1.1 million yen (about US$10,000) to coin the title of the season, and explained the title expresses affection for the hope that “Yurine and Jashin-chan will continue to cross each other and fight forever.”

Yukiwo launched the original manga in Flex Comix’s web magazine Comic Meteor in April 2012, and the series is ongoing.

Light previously ran a successful crowdfunding campaign on the UNEEDZONE.jp website from May-July 2015 for the Dies irae anime project, raising 96,560,858 yen from 5,188 backers. The original goal of the campaign was 30 million yen, which was the same as the one for Dropkick on My Devil!.