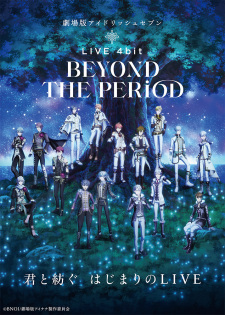 The official Twitter of the IDOLiSH7 multimedia franchise announced an anime movie on Saturday, revealing the main cast, staff, trailer, and a key visual (pictured). The movie is scheduled to open in Japanese theaters on May 20.

Cast members of the franchise’s IDOLiSH7, TRIGGER, Re:vale, and ŹOOĻ idol groups are reprising their roles.

The anime movie is based on Bandai Namco Online’s IDOLiSH7 multimedia franchise. The project originally began as an idol mobile rhythm game, which was released in Japan in August 2015. Lantis produces the music for the franchise, and Arina Tanemura is responsible for original character design. The project also spawned a novel and manga adaptation, a PlayStation Vita game, and multiple singles over the years.

A television anime adaptation by TROYCA aired its first season in Winter 2018, followed by the second season in Spring 2020. A third season is airing in two parts, with the first part in Summer 2021 and the second part in Fall 2022.

A live performance by IDOLiSH7, TRIGGER, Re:vale, and ŹOOĻ, 4 groups with different charms, will meet in one place, and the grand live entertainment will begin! (Source: Translated, edited from official website)

IDOLiSH7 Movie: LIVE 4bit – BEYOND THE PERiOD on MAL