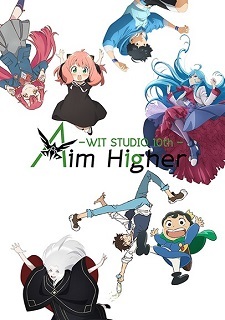 Wit Studio has wowed the world with many popular hits such as Shingeki no Kyojin (Attack on Titan), Vinland Saga, and Ousama Ranking (Ranking of Kings). At Anime NYC 2022, we had the opportunity to sit down with George Wada, the president of Wit Studio and Production I.G, for a special interview. During the interview, we discussed Spy x Family, the studio’s creative process and style, and their growing popularity with international audiences.

What was your experience in producing and coordinating such a prominent work as Spy x Family with CloverWorks? Did you encounter any challenges and how did you overcome them?

We collaborated with CloverWorks in part because Wit Studio believes that, right now, speed and opportunity are the most important factors in delivering anime. There are so many anime being produced on a regular basis that it’s difficult to stand out. So, in order to deliver the anime as fast as possible, we decided to collaborate on the series.

One of the difficulties was that each studio has its own work culture, and that sort of goes for pre-production, production, and the entire workflow. We had to sort of bring two different ways of thinking together when deciding what was important and what to prioritize. So yeah, the hardest thing was sort of meshing together our two different cultures. We got around that by having a very clear vision of what we were trying to get out there.

What has been your favorite scene to work on in Spy x Family?

What really stood out to me was getting across Anya’s cuteness and adorableness in the first episode. Also, in the fifth episode, when Loid is running around, we really felt like we were able to convey Wit Studio’s very unique sense of action.

My favorite face is when she’s trying to act like an adult and hide her emotions, and her eyes get a little thin.

Due to the nature of the show, the point of view switches between the three main characters frequently. Does this pose any difficulties during animation?

It’s very important to balance the three different perspectives. We have to show the good sides of the characters, but we’re also limited in how much we can show for each. So yeah, the hardest part is making sure no one takes up too much time while also showing their best sides.

Who is your favorite character in Spy x Family?

Have you been enjoying seeing all of the Spy x Family cosplayers here at Anime NYC? Have you come across any cosplay that you particularly liked?

Yeah, after the Crunchyroll panel, we were looking at all the cosplayers and taking group photos, which was a lot of fun. There was one that really surprised me: it was a really strong, buff guy dressed up as Anya, and it definitely stuck with me.

Original titles from Wit Studio include Vampire in the Garden, Bubble, Vivy: Fluorite Eye’s Song, and Great Pretender. What is your creative process for developing new ideas and concepts and making them a reality?

There are many anime that are based on manga, and this is usually the case. It is critical for the studio to function as a single entity in order to create an original title. What matters most is that we have a clear vision of what we want and how we want things to unfold. We usually start with images because we’re an animation studio. If we believe we can put together some really interesting ideas, it reinforces our belief that the final concept will be equally strong. So, it’s imperative to be able to take the time at the start to come up with those concepts, ideas, and images.

Are there certain themes or topics you tend to favor when creating those titles?

I began my career at Production I.G because I admired some of their works, including Ghost in the Shell and Patlabor. I enjoy works that are about organizations or other types of groups that exist in the background. So, in Attack on Titan and Ousama Ranking, I really like the idea of a weak and powerless main character fighting larger entities.

Wit’s most recent works encompass a wide range of themes and styles. How do you match the animation style to the story?

As you can imagine, there are so many different worldviews that can fit one piece. Whichever story and setting pair feels the most real to me is the one I choose. I also like to consider the animation and whether or not working on it will be enjoyable. When I’m working on the pieces, I’m constantly thinking about that balance, especially for Ousama Ranking and Great Pretender.

Ousama Ranking in particular has a very distinctive art style, with a storybook aesthetic. Are you ever concerned that anime fans who are more familiar with “traditional” anime art styles would be reluctant to try watching unique shows that don’t fit their image of what anime “should” be?

Yes, I was initially concerned that Ousama Ranking would not appeal to regular anime fans. But I have a great deal of faith in anime fans. I know that anime fans enjoy being challenged and seeing things they’ve never seen before, so I trusted their instincts. So, I would like to continue to challenge anime fans and their ideas about what anime should be.

What factors does Wit consider when deciding on its next project?

When deciding on the next project, we consider two factors: whether it will be challenging and whether it will create anime fans out of people who have never seen or enjoyed anime before.

Do you intend to work on passion projects, like Ousama Ranking and Great Pretender at a slower pace, or do you see yourself working on adapting big popular titles like Spy x Family?

I would like to continue doing both major projects and more passion projects at the same time. That’s because there are many different types of creators in the studio who want to work on a variety of projects.

Following up to the previous question, do you find it more enjoyable to create new IPs or sequel works?

I would say creating sequel works is actually more fun because fans are so enthusiastic.

Is there a story that you personally wish you could bring to life?

Personally, my dream is to move to the United States and work to spread the love of anime. I don’t have a specific story in mind that I would like to bring to life, but I would like to collaborate with a variety of creators.

Between New York and Wit’s recent trip to the Middle East and Paris, the company has been emphasizing global outreach lately, particularly with your recent “WIT STUDIO to the WORLD!!” campaign. What inspired the campaign, and what do you hope to achieve from it?

What really changed the situation for anime studios in Japan was the global fanbase. As a result of our global fanbase, we were approached by various platforms, including Netflix. But, as you know, we’re a studio in Kichijoji, and we never get to see those fans, so it’s difficult to have that perception. That’s why we launched “WIT STUDIO to the WORLD!!” because I wanted to go out there and feel and experience for myself the global fandom that we don’t get to see or experience. I’m overjoyed because we have so many fans.

Are you interested in producing more works such as Great Pretender that take place in international locations?

Yes, I definitely want to create more pieces in the future with locations from all over the world because I want the audience to have a sense of reality in the world that I’m creating.

And last but not least, what message do you want to send to your western audience, from Wit Studio?

The love passion that everyone has for anime has room to grow. We need more and more of it. Try to rope in your friends to watch anime, so that we can expand our fanbase.

Interview was conducted through an interpreter and has been edited for clarity. Special thanks to Wit Studio and Anime NYC.