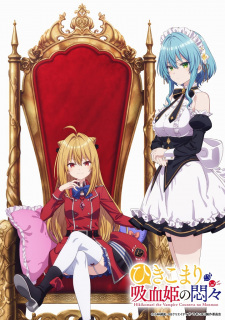 The official Twitter of Kotei Kobayashi’s Hikikomari Kyuuketsuki no Monmon (The Vexations of a Shut-In Vampire Princess) light novel announced a television anime adaptation on Thursday, revealing an official website, the main cast, staff, a teaser promo, and a teaser visual (pictured). The anime is set to premiere in 2023.

Kobayashi began publishing the comedy fantasy light novel in GA Bunko in January 2020, featuring illustrations by Riichu. SB Creative shipped the ninth volume in October 2022, with the tenth volume scheduled to be released on January 14.

Riichu began drawing a manga adaptation in Square Enix’s Big Gangan magazine in December 2021. The first volume shipped in June 2022, with the second volume set to release on January 25.

Yen Press licensed the light novel in English in August 2021 and released the third volume in December 2022.

Three years into her life as a shut-in, vampire Terakomari Gandesblood (Komari for short), awakens to find she’s been appointed as a Commander in the Mulnite Imperial Army! The thing is, her new unit consists solely of belligerent ruffians who revolt against their superiors at the slightest hint of weakness. Although Komari hails from a line of vampires as powerful as they are prestigious, her refusal to drink blood has made her the picture of mediocrity—scrawny, un-coordinated, and inept at magic. With the odds stacked against her, will the help of her trusty (and slightly infatuated) maid Vill be enough for this recluse to blunder her way to success? Or will Komari rue the day she ever left the safety of her room? (Source: Yen Press)

Hikikomari Kyuuketsuki no Monmon on MAL