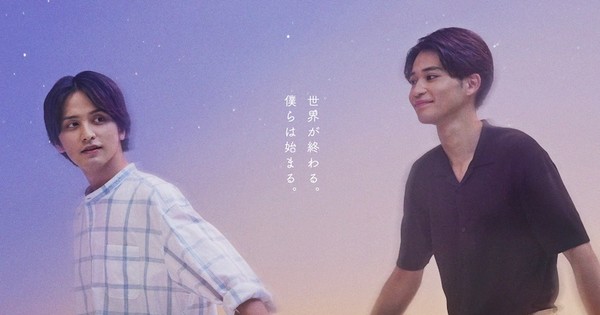 The official website for the live-action television series of Maki Marukido’s The End of the World, With You (Bokura no Micro na Shūmatsu) manga streamed on Tuesday a commercial, which promotes its January 29 premiere date.

The series’ main cast are Toshiki Seto as protagonist and unmotivated salaryman Masumi Nishina, and Keisuke Nakata as Ritsu Kusakabe, a man from Masumi’s past.

Kōichirō Miki and Hiroshi Mori are directing the series, and Miki is also penning the scripts.

The manga’s story begins when Masumi Nishina, an unmotivated salaryman going through the motions, confronts a news report that the world will end from an unavoidable meteor impact in 10 years. He returns to his college’s library determined to read everything he can, but encounters a man from his past that he absolutely did not want to meet: Ritsu Kusakabe.

Marukido published the Pornographer boys’ love manga in on BLUE in 2016, and it has one compiled book volume. Marukido also published a spinoff manga in on BLUE in 2016 titled Indigo no Kibun (Mood Indigo), and a sequel manga titled Zoku Pornographer Playback. The manga also has one compiled book volume. The manga inspired a television series adaptation that premiered on Fuji TV‘s FOD (Fuji TV On Demand) streaming service in July 2018, and a second series adapting the Mood Indigo past arc premiered in March 2019. Zoku Pornographer Playback inspired a live-action film that opened in February 2021.

Digital manga publisher futekiya is publishing all three of those manga in English, along with Marukido’s Me wo Tojite mo Hikari wa Mieru yo manga.

Sources: The End of the World, With You live-action series’ website, Comic Natalie