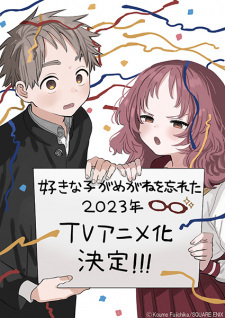 Production company Shochiku opened an official website for a television anime adaptation of Koume Fujichika’s Suki na Ko ga Megane wo Wasureta (The Girl I Like Forgot Her Glasses) manga on Friday. The anime is scheduled to premiere in 2023.

Fujichika began drawing the slice of life romance manga in Monthly Gangan Joker in November 2018. Square Enix published the ninth volume in June 2022, with the tenth volume set to be released on January 20.

Square Enix Manga & Books licensed the manga in English in March 2022 and published the first volume in December 2022. The second volume is set to release on February 21.

As the deskmate of Ai Mie, Kaede Komura always has his attention fixed on her. Attracted by her cute charms, all he wishes for is that she would look at him with those beautiful eyes beneath her glasses. But just a few days after making her acquaintance, Kaede notices something different about Ai: her eyes are squinting and her glasses are missing. Nonetheless, he still finds her adorable!

Unexpectedly, Ai has a tendency to forget her glasses. Having terrible vision, she has difficulty going through her day at school. Thankfully, Kaede is more than willing to help her. As Ai starts relying on him, Kaede’s feelings for her grow even more. Likewise, despite her short-sightedness, Kaede slowly becomes the person Ai always hopes to see. [Written by MAL Rewrite]