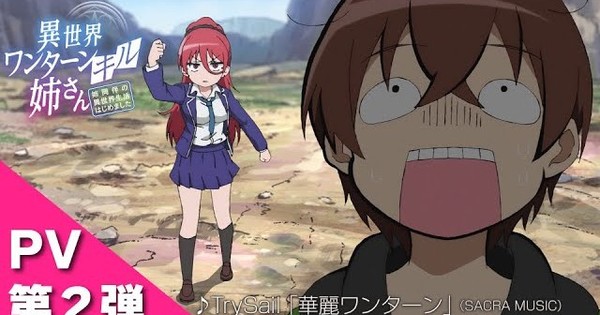 The official website for My One-Hit Kill Sister, the anime of Konoe‘s Isekai One Turn Kill Nee-san: Ane Dо̄han no Isekai Seikatsu Hajimemashita (One Turn Kill Sister in Another World: I Started Living in Another World with My Older Sister) light novels, began streaming a new teaser trailer for the anime on Thursday. The teaser previews the anime’s opening theme song “Karei One Turn” (Splendid One Turn) by TrySail.

The anime will premiere in 2023. Crunchyroll will stream the anime as it airs.

Hiroaki Takagi (The Great Jahy Will Not Be Defeated! episode director) is directing the anime at Gekkō. Yōhei Kashii (Battle Athletes Victory ReSTART!) is in charge of the series scripts. Yūji Hamada is designing the characters, while Maho Tanabe is in charge of sub-character design. Kenichi Kanagawa is credited for monster design. Kenichi Kurata is the art director, while Ryōta Katsuta and Maki Yamamoto are the color key artists. Atsushi Tamura is the compositing director of photography.

Konoe launched the novels on the Shōsetsuka ni Narō (Let’s Be Novelists) website in December 2019. Kenji Taguchi (Ane Log) and Konoe launched a manga adaptation on Shogakukan‘s Sunday Webry website and in the Sunday GX magazine in March 2020.

The story follows Asahi Ikusaba, a high-school student who got lost and ended up in another world. He has knowledge of video games and fantasy worlds, but he is weak and does not have any “cheat abilities.” He finds his older sister Maya in the other world, and she has the strongest cheat ability and also has a brother complex.