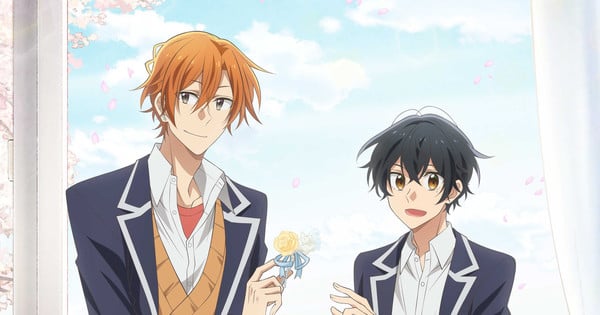 The staff for Sasaki to Miyano: Sotsugyo-hen (Graduation Chapter), the new anime film based on Shō Harusono‘s Sasaki and Miyano manga, revealed a trailer and main visual on Friday.

Theatergoers who watch the film during the first week will receive a manga booklet by original creator Harusono titled “Sasaki to Miyano: Valentine no Chottoshita Hanashi” (A Tiny Valentine Episode).

There will be a commemorative screening with cast members in attendance on February 24 at Grand Cinema Sunshine Ikebukuro.

The film will premiere in Japan on February 17, and will screen alongside an anime short adaptation of Harusono’s Hirano and Kagiura spinoff manga.

Shinji Ishihira is returning to direct the film at Studio DEEN. Other returning staff members include Takahiro Ueno as assistant director, Yoshiko Nakamura as screenwriter, Maki Fujii as character designer, and Kana Shibue as composer.

The band Miracle Chimpanzee is returning from the earlier television anime to perform the theme song “March.” The song and the film’s background music will appear on the original soundtrack which goes on sale on February 15.

The television anime adaptation of Harusono’s Sasaki and Miyano manga premiered in January 2022 and aired for 12 episodes. Funimation streamed the anime as it aired and also streamed an English dub.

An OVA for the franchise shipped on DVD with the ninth volume of the main manga on July 27. Harusono drafted the original anime episode, titled “Koi ni Kizuku Mae no Chotto Shita Hanashi.” The episode is considered the 13th episode of the television anime series. Crunchyroll is streaming the episode.

Yen Press is releasing both Sasaki and Miyano and Hirano and Kagiura in English.