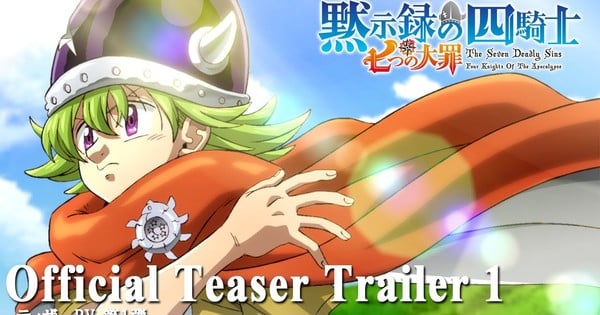 The official Twitter account for The Seven Deadly Sins anime revealed on Wednesday that Telecom Animation Film will produce the television anime adaptation of Nakaba Suzuki‘s The Seven Deadly Sins: Four Knights of the Apocalypse (Mokushiroku no Yon-kishi) sequel manga for a 2023 premiere. Shou Komura will voice the protagonist Percival. UNLIMITED PRODUCE by TMS is in charge of production and planning. TMS unveiled a teaser trailer:

Suzuki launched the manga in Weekly Shōnen Magazine in January 2021. Kodansha Comics is publishing the manga simultaneously in English digitally, and as physical copies. The company describes the first volume:

Percival has always lived with his grandfather on God’s Finger, a remote haven that sits high above the clouds. And though he loves the simple life, he secretly longs for adventure. But Percival’s life is changed forever when an intruder—who shares a shocking connection with him—tears away everything he’s ever known.

With nothing left to do but chase down the one who took everything from him, Percival sets out on his own. During his journey, the sheltered boy discovers that there are a lot of things he doesn’t know about normal life. Luckily, he meets friends along the way who can help him get by—but how will they react when they find out about Percival’s destiny… and how it’s connected to the end of the world?

Suzuki launched the original The Seven Deadly Sins manga in Kodansha‘s Weekly Shōnen Magazine in 2012, and ended it in March 2020. Kodansha published the manga’s 41st and final volume in May 2020. Kodansha Comics is publishing the manga in English digitally and in print. Crunchyroll posted new chapters as they appeared in Japan.

The The Seven Deadly Sins: Imperial Wrath of The Gods (Nanatsu no Taizai: Kamigami no Gekirin) anime, the third television anime series, premiered in October 2019, and ended in March 2020. Netflix began streaming the anime in August 2020.