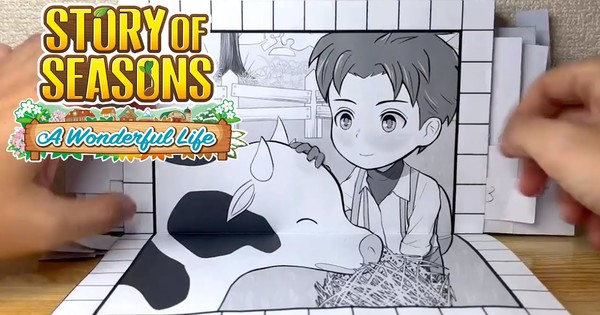 XSEED Games announced on Wednesday that it will release the Story of Seasons: A Wonderful Life farming life sim remake of the original 2003 GameCube game on Nintendo Switch, PlayStation 5, Xbox Series X|S, and PC via Steam on June 27. Marvelous will release the game in Europe and Australia on the same day. The companies streamed a trailer that presents the game’s story in a papercraft manga style:

The game will get a premium bundle in North America that includes a goat pocket plushie and a cloth poster in a box, featuring visuals by series illustrator Igusa Matsuyama. The bundle in Europe and Australia will also include the cloth poster and box, as well as a 40-page A5 notebook and chibi stickers.

Your new life begins in Forgotten Valley, a tranquil community where your father and his friend Takakura once dreamed of running a farm. As you befriend the valley’s residents and fulfill your father’s legacy, you’ll live a carefree life on the farm growing crops and raising animals. As the seasons go by, you’ll find your lifelong partner, raise a child together, and watch them grow up before your very eyes.

After each day’s work on the farm is done, you can go fishing, hunt for ancient treasures at the local dig site, or chat with your friends in town to build precious memories. And when the years have passed, your child will be old enough to choose a career for themselves… Will they inherit the farm? Or will they find their calling somewhere else? Only time will tell.

This remake of a beloved classic features plenty of new events, enhanced festivals, more recipes to cook, and a cornucopia of never-before-seen crops. Looking for more to do around the farm? Take pictures of your family with the new camera feature, dress up in your favorite outfits, or help your fellow residents with their requests. Whether this is your first STORY OF SEASONS adventure or you’re returning to Forgotten Valley, a wonderful life awaits you.

Story of Seasons: A Wonderful Life previously debuted for the Nintendo GameCube in September 2003 in Japan and March 2004 in North America under the title Harvest Moon: A Wonderful Life by publisher Natsume. XSEED Games took over releasing the franchise in 2015, and it cannot use Natsume’s Harvest Moon title.