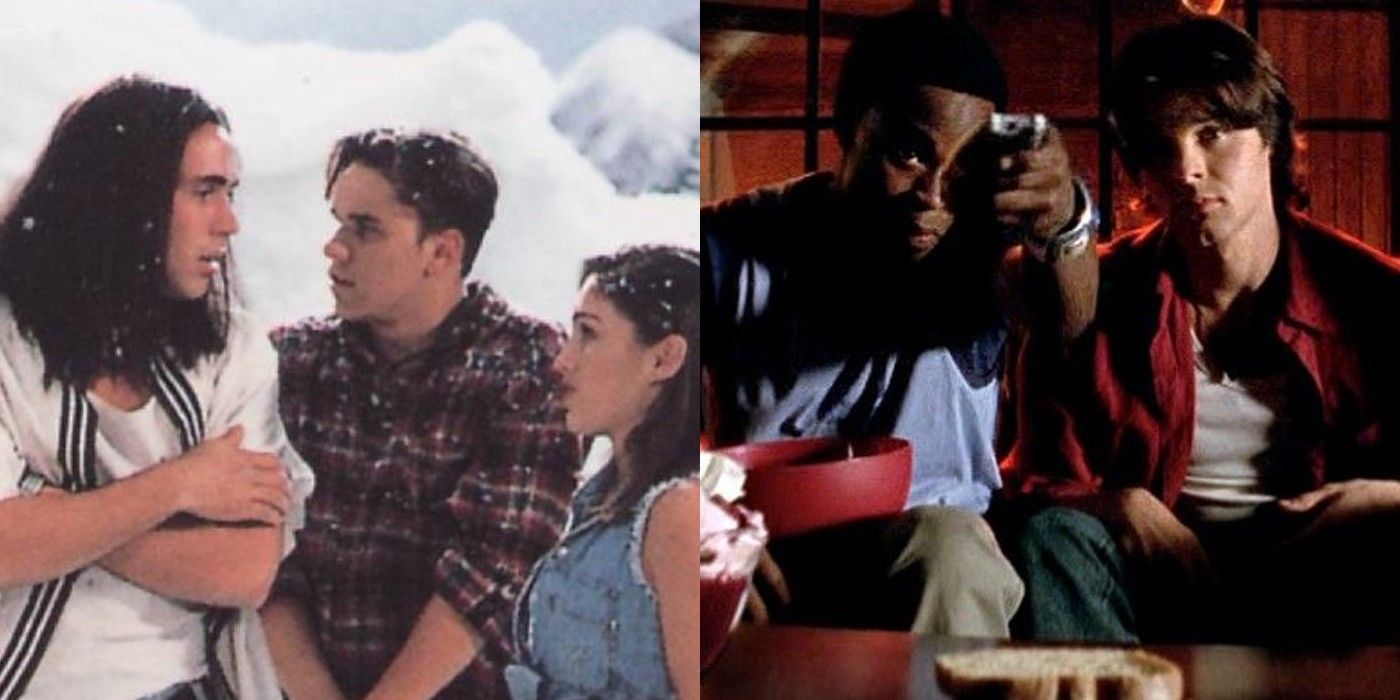 Over the years, the Power Rangers series has undergone several shifts in tone, ranging from light-hearted and goofy to dark and gritty and back again. Seasons such as Power Rangers In Space, Lost Galaxy, RPM, and Lightspeed Rescue are well-known for their grim storylines, experimental episodes, tragic moments, and villains who were actually scary and competent. Other seasons, like the original Mighty Morphin Power Rangers, are mostly fun and silly and feature absurd situations.

RELATED: 10 Best Power Rangers Series, RankedMuch has been made of the series’ darker episodes due to their novelty, and there’s no denying they were good episodes. However, the lighter episodes also deserve some recognition for various reasons. Some give the Power Rangers much-needed character development. Some are experimental, and some are just plain hilarious.

10 Storybook Rangers Was A Fun Concept

In “Storybook Rangers,” Pink Ranger Kimberly and two of her friends are trapped in her favorite storybook by Rita Repulsa and must participate in the story to escape. This premise sounds like it would appeal to younger kids. Not only does Kimberly meet her favorite book character, but she and her fellow Rangers get to play Santa for orphan children. Also, the monsters aren’t that scary or dangerous.

Nonetheless, it’s a heart-warming episode where Rangers use their compassion and creativity to save the day and not just their fighting skills. It’s also a love letter for book nerds and a moment of nostalgia for childhood memories.

9 Another Song And Dance Did It Before Buffy

When Buffy the Vampire Slayer came out with “Once More With Feeling,” the episode received praise for its unique premise and great music. Turns out. However, Mighty Morphin Power Rangers already did something similar in “Another Song And Dance.” In this episode, Rangers Tommy and Tanya are cursed to sing operatically every time they speak by Rita Repulsa.

RELATED: Buffy The Vampire Slayer: 10 Best Episodes, According To IMDbIn Wheaton’s defense, the two episodes are different in other aspects. “Once More With Feeling” follows the musical formula, whereas “Another Song And Dance” has Tommy and Tanya singing all the time. On the other hand, both episodes have some of the funniest moments in their respective shows.

It’s becoming a trend for series to have one meta-episode that acknowledges to some degree that the series is a work of fiction. In My Little Pony: Friendship is Magic, Twilight Sparkle publishes a book about her adventures only for her and her friends to get mobbed by demanding fans. In Avatar: The Last Airbender, Team Avatar attends a play about their adventures and is upset with their portrayals.

In the Power Rangers series, the Dino Thunder squad finds a Japanese TV show about themselves. Conner is immediately critical of it, while the others find it enjoyable. It’s an interesting episode that addresses common criticisms of the franchise and gives audiences their fill of action while giving the real Power Rangers a break from superhero life.

7 Rocky Just Wants To Have Fun, But It Causes Problems

Most Power Rangers episodes feature valuable lessons on being a good person and getting along in the world. They aren’t always subtle about it, either. “Rocky Just Wants To Have Fun” is an especially blunt episode about balancing play with work. However, it works simply because of how silly it is.

When Rocky becomes interested in a new game, Lord Zedd gets the idea to curse Rocky so that he always wants to play. The resulting disaster culminates in Zedd turning the game machine into a monster, turning the Rangers into Pachinko balls. It’s one of the wackier episodes in the series, making the blatant preaching easier to swallow.

“Pirate In Pink” is a particularly silly episode with the team looking for buried treasure and encountering the ghost of a famous pirate. Pink Ranger Rose gets grumpy and impatient with her team’s antics, prompting the ghost to possess her so that she’ll loosen up and have fun. Naturally, hijinks ensue.

RELATED: 10 Best Pink Power Rangers From The TV Series, RankedInterestingly, an earlier season of the Power Rangers also had a weird episode that tackled the question of work/play balance. The episode was “Rocky Just Wants To Have Fun,” which teaches that all play and no work results in catastrophe. “Pirate In Pink” teaches that all work and no play can lead to an unhappy life. Watching these two episodes back-to-back might be interesting as their lessons balance each other out. Plus, it would be fun.

5 Two For One Has The Most Bizzare Monster Ever

In the episode “Two for One,” Tommy and Kimberly finally act on their romantic feelings and go on a date. To honor the occasion, Kimberly’s mother gives her a purse with strong sentimental value. However, Lord Zedd turns the purse into a monster and sets it loose on the town.

This monster is undoubtedly one of the strangest enemies that the Power Rangers have ever faced. The episode is a weird and kooky fever dream that exists solely for laughs and shouldn’t be taken too seriously. It’s a good thing since audiences couldn’t possibly do anything else. As a side note, Kimberly gets her purse back in the end.

Although fans have complained about the Pink Rangers not being as awesome or fleshed out as the other Rangers, they actually get some of the best moments in the show. One such moment was in “A Different Shade of Pink.”

By this point, the showrunners have been preparing the audience for Kimberly’s departure and the introduction of her replacement, Kat Hill. While some viewers might find this sad, the friendship that grows between Kat and Kimberly is very sweet. Not only is this one of the transitions that make logical sense, but it’s done in a heartfelt way. It’s a touching goodbye to a fan favorite and a warm welcome for the new team member.

“Another Brick in the Wall” was one of Katherine Hill’s earliest episodes as the Pink Ranger after she took over from Kimberly. In this episode, Kat supervises the construction of a homeless shelter, but of course, Rita has to ruin the party by sending in a monster.

The Brick Bully is one of the more imaginative monsters in the series. It’s essentially a brick wall brought to life that can turn people into bricks. More importantly, this is one of the episodes that shows the Power Rangers being heroic and doing good without the suits or the fighting. Superheroes aren’t often shown improving the world outside of fighting evil, and it’s nice to see the Rangers doing it.

2 Trouble By The Slice Sends Divatox On A Misadventure

“Trouble by the Slice” is pure comedy. When a teleporter demonstration goes wrong, Divatox is left stranded with no memory of whom she is and ends up working in a pizza parlor. Her lackeys send out a pizza monster while they find and retrieve her.

RELATED: The 10 Worst Villains From Power Rangers, RankedThe final fight is goofier than usual. The Power Rangers get baked into a pizza, and the Blue Senturion stops the madcap delivery cars with a stoplight. Divatox, however, is the highlight of this episode. Her being terrible at a typical job while still having her bad-girl attitude is just so fun to watch. It’s one of her funniest moments.

1 Good Will Always Rise Up Against Evil, Even From The Unlikeliest Places

Bulk and Skull have been fan favorites since the beginning, but “When Is A Ranger Not A Ranger?” is truly one of the highlights of their story arcs. As the Power Rangers struggle to defeat a new monster, Bulk and Skull catch them in the act of morphing and are shocked to realize that their bully victims are also their heroes. Instead of being resentful, they courageously step in to save the Power Rangers.

“When Is A Ranger Not A Ranger?” is a feel-good episode with great payoffs. The sense of relief and victory when the Power Rangers are saved is cathartic. Watching Bulk and Skull become the heroes they always wanted to be is satisfying to watch. The beginning might be a little scary, but the ending makes the audience feel warm and fuzzy.

NEXT: The 9 Darkest Power Rangers Episodes