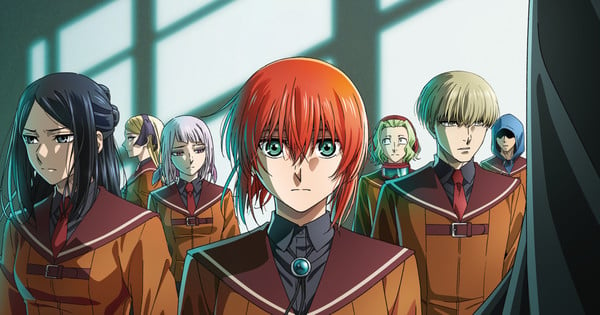 The staff for the second season of the television anime based on Kore Yamazaki‘s The Ancient Magus’ Bride (Mahō Tsukai no Yome) manga unveiled on Thursday the first trailer with English subtitles, main visual, cast, and April 6 premiere.

The anime will premere in Japan on Tokyo MX on April 6 at 10:00 p.m. JST before airing on BS11. The series will stream in Japan on Amazon Prime Video and Hikari TV.

Crunchyroll will stream the anime worldwide excluding Asia, and it describes the anime:

Chise was able to accept Elias and herself, if not necessarily everything about her situation. After Cartaphilus fell back into a slumber that would not last forever, Chise was able to go back to her regular life. Then she receives an invitation from a mutual aid organization for mages called the College.

Under the British Library exists a secret society of mages. Encounters and interactions with people are about to open some new doors.

This is a story about saving yourself to save another.

The anime will adapt the “Gakuin” (College) arc of the manga, which launched in May 2018. The cast and staff of the first television anime returned to animate a promotional video for the arc in March 2019.

Other staff members include:

The most recent anime in the franchise is the three-episode The Ancient Magus’ Bride – The Boy from the West and the Knight of the Blue Storm OAD (original anime disc) project. The project is being bundled with the limited editions of the 16th, 17th, and 18th volumes of the manga. The 16th volume shipped in September 2021, and the 17th volume shipped on March 10. The 18th volume will ship on September 9. The staff described the OAD series as the “first part” of a new anime project.

Crunchyroll is streaming the OAD project worldwide outside of Asia.

The manga previously inspired a television anime that premiered in Japan in 2017. Crunchyroll streamed the series in Japanese with English subtitles, and Funimation streamed an English dub for the series. The manga also inspired a prequel original video anime (OVA) series titled The Ancient Magus’ Bride: Those Awaiting a Star in 2017. Funimation released all 24 episodes of the television series with the OVA on home video in 2019.

Yamazaki launched the The Ancient Magus’ Bride manga in Mag Garden‘s Monthly Comic Blade magazine in 2013 but the magazine ceased publication in September 2014. The manga then moved to the publisher’s Monthly Comic Garden magazine, where it is ongoing. The manga has more than 10 million copies in circulation.

Seven Seas Entertainment is releasing the manga in English. Seven Seas is also releasing several spinoff manga and supplement books in the series.