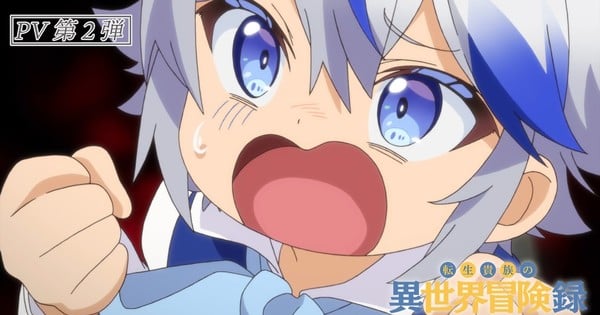 The official Twitter account for The Aristocrat’s Otherworldly Adventure: Serving Gods Who Go Too Far, the television anime of Yashu‘s Chronicles of an Aristocrat Reborn in Another World (Tensei Kizoku no Isekai Bōken Roku) light novels, posted the second promotional video for the anime on Thursday. The video reveals more cast members, staff, and April 2023 premiere date. The video also reveals and previews the anime’s ending theme song “Nanairo no E no Gu de” (With Seven Colors of Paint) by 7LAND.

The new cast members include (Note: Character name romanizations are not official):

Natsuko Takahashi (Tokyo Magnitude 8.0, Farewell, My Dear Cramer) is in charge of the series scripts. Eri Tokugawa (Ameiro Cocoa Series Ame-con!!) is designing the characters. MICHIRU (Ascendance of a Bookworm) is composing the music, and Ryousuke Naya is the sound director.

As previously announced, Noriyuki Nakamura (Zumomo to Nupepe, Shoot! Goal to the Future) is directing the anime at EMT Squared and Magic Bus. Ayumu Hatori is a producer on the anime. Mo and nini are credited for the original character designs.

Crunchyroll will stream the anime in April.

Seven Seas Entertainment is releasing nini’s manga adaptation of the novels, and it describes the story:

After dying in the act of stopping a crime in modern Japan, our hero is reincarnated as Cain von Silford, third son of a noble family in a world of swords and sorcery. In his new life, all children receive a blessing from the gods…but Cain is unexpectedly blessed with an absolutely enormous, over-the-top cornucopia of magical powers. If his dream of traveling the world as a free spirit is to come true, he can’t reveal too much of his potential to the wrong people. A light-hearted, escapist adventure in another world begins!

Yashu began serializing the story on the Shōsetsuka ni Narō website in October 2016. Hifumi Shobo began publishing the novels in print with illustrations by Mo in June 2017. The artist nini launched the novels’ manga adaptation on Mag Garden‘s Mag Comi website in March 2018.