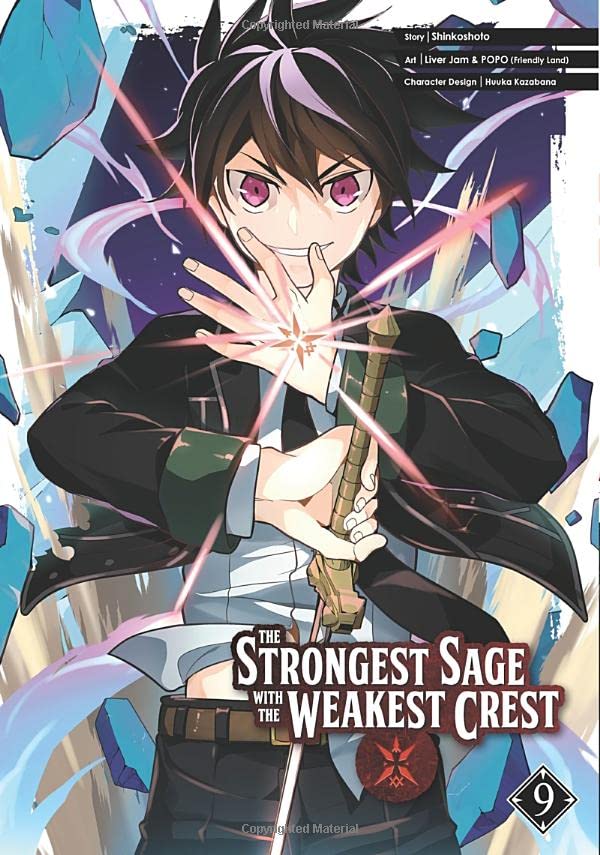 When we left the cast of The Strongest Sage with the Weakest Crest at the end of Volume 8, the trio had arrived in Melchias the Maze City. Here Matthias discovered a demon plotting to use the Dracopulse Line that lies beneath the city for nefarious deeds. Now in Volume 9, our hero continues his quest to rid the city of evil.

If defeating the demon was the only thing Matthias had to worry about, his task would be easy enough, but on top of that, he has to deal with a corrupt lord. If that wasn’t enough, the group also set off a trap placed by the demon, one which summons thousands of monsters to the outskirts of the city.

With the city and residents about to meet certain doom, Matthias must first find a way of dealing with the monsters before getting down to fighting the demon. Luckily, he has the perfect spell in mind and with Lurie, Alma and Iris by his side our hero soon makes short work of the beasts advancing on Melchias. With this done, he can focus on the other tasks at hand…

When we reach Volume 10, the Melchias storyline is over and Matthias’s group have set their sights on leaving the kingdom behind. Now that the Kingdom of Eis is safe from the demons, Matthias plans to travel to the Rajinia Alliance, a part of the world that’s not on bad terms with Eis but also hasn’t had a lot of dealings with them.

Matthias quickly gets permission for his party to travel abroad, but before he can reach the area where the demons are lurking, his team will have to register at the adventurers’ guild. Not only that, they’ll have to raise their ranks to prove they have what it takes to protect themselves from harm.

So it’s off tackling your average quest for the team, slaying monsters left and right to work their way up to C-Rank. Once there, they’re tasked with reclaiming the Testra Plains – an area that has been taken over by powerful monsters. This, of course, delights Matthias, who is always eager to face off against a mighty opponent.

Now we’ve reached Volume 10, it’s clear that The Strongest Sage with the Weakest Crest has no intentions of moving away from the formula that has gotten us this far. The characters travel around facing off against monsters in battles that look great and we’re treated to the occasional piece of world-building among it all. The move away from the group being stationed in the Kingdom of Eis has also helped freshen things up, so despite how formulaic the story feels, it’s certainly not dull.

If you’ve enjoyed the series so far then I doubt the future volumes will disappoint. On the other hand, this is also a good jumping-off point if you aren’t sure you want to commit to another 10+ volumes of the same kind of content.

It’s clear that the mangaka team Liver Jam & POPO (Friendly Land) have figured out what works and are keen to stick with it. They’ve got an entertaining cast of characters to work with too, helped by the fact they’ve been well developed throughout these 10 volumes and the fact that there are only four of them. It’s relatively restrained compared to other series which have a much bigger main cast by this point.

The Strongest Sage with the Weakest Crest Volumes 9 and 10 come to the West thanks to Square Enix Manga and continue to be translated by Caleb D. Cook. The translation reads well with no issues to note and both books contain a short story written by original light novel author Shinkoshoto. Volume 11 of the series is currently scheduled for an English release in March with further releases scheduled bi-monthly through to September.

Overall, these volumes of The Strongest Sage with the Weakest Crest show that the series has found what works for it and is dedicated to the formula going forward. Fans of the manga will be content to continue following Matthias’ adventures given the consistency of the quality, but others may decide it’s time to bid goodbye to this series as it shows no signs of coming to an end anytime soon.

A free preview of Volume 9 can be found on the publishers website here and Volume 10 has a free preview here.

A Galaxy Next Door Volumes 2 and 3 Review • Funimation News