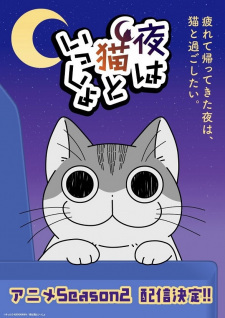 The official website of the Yoru wa Neko to Issho (Nights with a Cat) television anime announced a second season on Wednesday, revealing a key visual (pictured). The anime is set to premiere in 2023.

The anime series adapts Kyuru Z’s comedy slice of life manga, which originally began on their Nekonavi blog and Twitter under the title Zutto Neko Shoshinsha in December 2019. Kadokawa began publishing the manga the following October and shipped the fourth volume in October 2022.

Yen Press licensed the manga in English in November 2021. The second volume went on sale in October 2022.

Fuuta-kun has never owned a cat before, but his younger sister, Pii-chan, moves into his house with the round gray cat Kyuruga. Inexperienced with cats, Fuuta-kun has no idea what to expect, and each night after he returns home is marked by odd and endearing surprises from his new pet. [Written by MAL Rewrite]